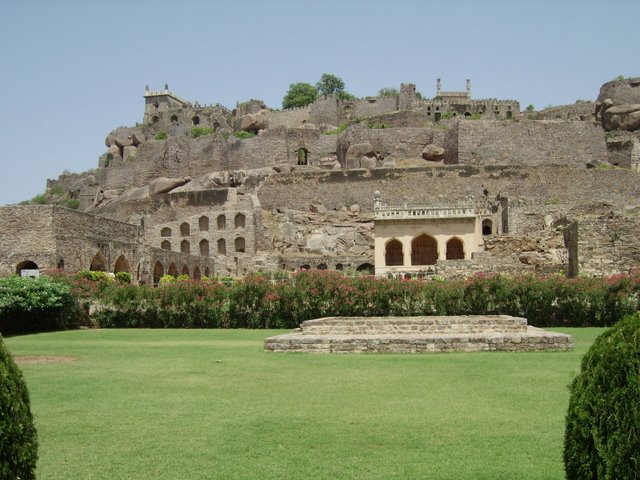 The word 'Golconda' originated from Golla Konda which stands for Shepherd's Hill in Telugu. Golconda Fort was first constructed as a mud fort by the rulers of Kakatiya Dynasty in the 13th century. The fort was rebuilt and strengthened by Pratapa Rudra of the Kakatiyas. It was further strengthened by the Musunuri Nayaks, who defeated the Tughlaq army occupying Warangal. The fort was ceded to the Bahmani Sultanate as part of the treaty in 1364. It was later re-built with granite by initial Qutub Shahi kings, which took about 62 years to complete. Golconda Fort was under the control of Qutub Shahis from 1518 AD to 1687 AD. The fort finally fell into ruins after the siege of Mughal Empire under Aurangzeb in 1687.

The fortress was built on a granite hill that is 400ft high and surrounded by massive fortification walls. Golkonda consists of four distinct forts with a 10 km long outer wall having 87 semicircular bastions; some still mounted with cannons, eight gateways, four drawbridges and number of royal apartments, temples, mosques, armory, stables etc. The outermost enclosure is called Fateh Darwaza meaning Victory gate, after Aurangzeb's army marched successfully through this gate. At Fateh Darwaza one can witness fantastic acoustical effects, which is one among the many famous engineering marvels at Golconda. One handclap at a certain point below the entrance dome can be heard at the highest point of the pavilion almost a kilometer away. This was said to be used for warning the royals in case of an attack.

The main structure of the fort is laid out in a sequence of enclosures that holds the public and administrative structures to the royal residences and halls. The mortuary baths lie to the right of the portico. The offices of Akkanna and Madanna are further up. Ruins of the Ambar Khana and Bari Baoli (step well) are close to the upper terrace. The crowning glory of the Fort is the Durbar Hall, which stands atop a hill. It's approached by well laid steps of about one thousand. Other attractive features of the Fort include water supply system, famous Rahban cannon and the prison which housed Ramadas who built the temple of Bhadrachalm. The region is known for the mines that have produced some of the world's most famous gems, including the Koh-I-Noor, the Hope Diamond and the Nassak Diamond.

The Sound and Light Show at the Golconda Fort attracts a large number of people to witness the events depicting the past of the fort using various sound and light effects.