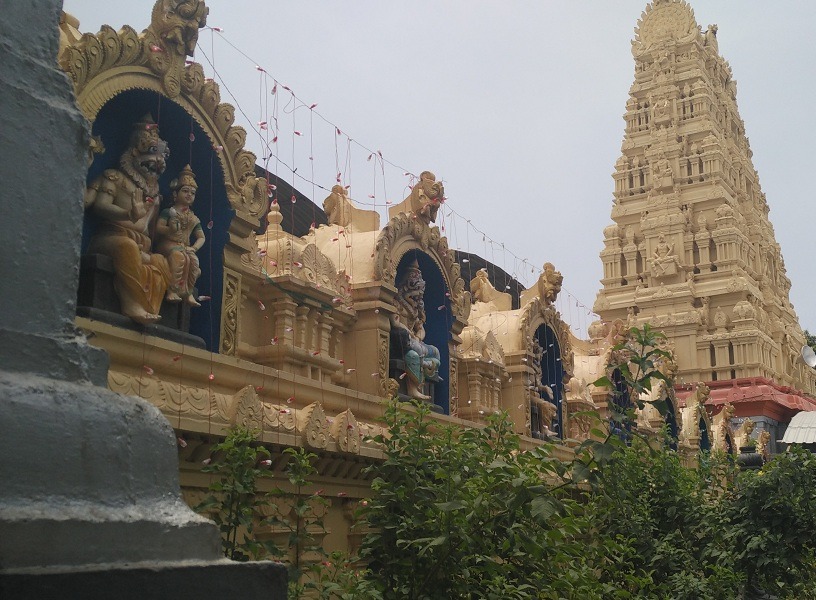 At a distance of 31 km from Jagityal, 65 km from Ramagundam, 70 km from Karimnagar and 245 km from Hyderabad, Dharmapuri is a small historical town in Karimnagar district of Telangana. It is famous for Lakshmi Narasimha Swamy Temple, one of the popular places of pilgrimage in Telangana.

The town was ruled by King Dharma Varma and thus the name of the town was named after him as Dharmapuri. It is famous for its temples and artists, located on the banks of holy river Godavari. The most interesting fact of Dharmapuri is that the Godavari river flows from north to south direction unlike west to east in all other places where it flows and hence the river is termed here as Dakshina Vahini. Dharmapuri has one of the largest settlements of Vedic Brahmins in Telangana. Due to presence of many temples in the area, it is also known as 'Teertharajamu'.

Dharmapuri attained religious importance owing to the existence of the shrine dedicated to Narasimha Swamy, an incarnation of Lord Vishnu and is regarded as one of the nine Narasimha Kshetrams of Telangana & Andhra Pradesh. It is believed that the temple was built between 850 - 928 AD. This ancient Telangana temple has two versions owing to the ravages it has witnessed. The older one is known as the Pata Narasimha Swamy Temple and the newer one is called the Kottha Narasimha Swamy temple. The Subedar of Hyderabad, Rustumdil Khan, with the support of Aurangzeb the then Sultan of Delhi converted the temple to a Mosque. But it was constructed yet again in 1448 and made a temple.

The presiding deity Lord Narasimha is seen seated in Padmasana depicting the yogic posture with the palms bending on his knees. He is accompanied with Goddess Lakshmi. Such a yogic posture is considered a rare form of the Lord. The sculptures of Gods and Goddesses are scattered inside the temple premises. The eight idols of Hanuman and the six feet tall idol of Lord Brahma along with other idols of Lord Yama, Lord Krishna and Lord Balarama are also worth seeing.

Every year in the months of March and April, devotees of the Lord come together to celebrate the famous Dharmapuri Lakshmi Narasimha Swamy Aalaya Jatara, also known as Brahmotsavam Jathara. During the celebrations, the procession idol or the Utsav Vigraha of the presiding deity is adorned and taken out in a procession.