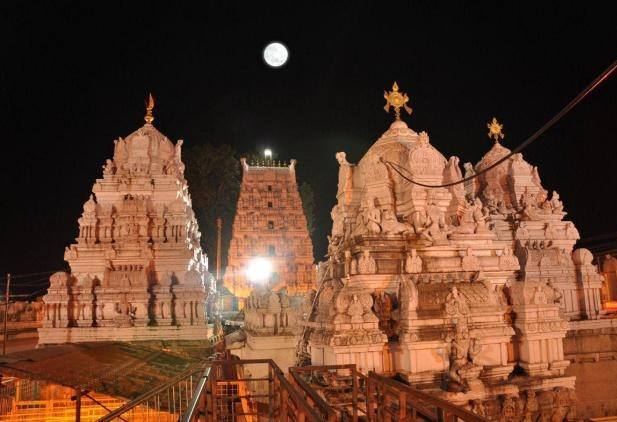 At a distance of 36 km from Karimnagar, 127 km from Nizamabad and 151 km from Hyderabad, Vemulawada is one of the most famous pilgrimage sites in Telangana and also one of the popular one day trip from Hyderabad.

Vemulawada is famous for the temple of Rajarajeshwara Swamy, an incarnation of Lord Shiva. It was built by one of the governors of Kalyani Chalukyas by name Rajadithya between 11th and 12th centuries. The presiding deity is locally popular as Rajanna who is accompanied by the idols of Sri Raja Rajeswari Devi and Siddi Vinayaka. It houses several temples dedicated to other deities including Anantha Padmanabha Swamy, Bhimeshwara Swamy, Kodanda Rama and Kasi Visweswara. Apart from these there is a tomb of Muslim saint.

Located on the banks of Mulavagu stream, Vemulawada was once the capital city of Vemulawada Chalukyas dynasty between 750-973 CE. The remains of the temples and sculptures show the great architecture of Chalukyas. There are several inscriptions available that refer the reign of Chalukyas. It was earlier known as Lemulavatika, Lembulavade, and finally transformed into Vemulawada.

According to the legend, Lord Siva after having stayed at Kashi, Chidambaram, Srisailam and Kedareswar chose to reside at Vemulawada. Vemulawada was ruled by the dynasties of Ikshwakus, Satavahanas and the Chalukyas who made it their state capital. The place is also associated with the 11th Century Telugu poet, Vemulawada Bheemakavi.

Agraharam Hanuman Temple, Baddi Pochamma Temple and Nampally Gutta are the nearby attractions of Vemulawada. Every year at the time of Maha Shiva Rathri, more than 5 lakh people visit Vemulavada. During Sravana Masam and Karthika Masam, the temple attracts large crowd. Accommodation is also available in Vemulawada if you are planning to stay a day.

How to Reach Vemulawada - Full Details

Top 10 Places to Visit in Vemulawada

#1 of 4 Places to Visit in Vemulawada

At a distance of 2 km from Vemulawada Bus Stand, Sri Raja Rajeshwara Swamy Temple (Vemulawada Temple) is one of the most famous pilgrim sites in Telangana and the prime attraction of Vemulawada.

This temple, dedicated to Lord Shiva is one of the ancient and famous Shiva temples located in Telangana. The presiding deity of the temple is locally popular as Rajanna. The idol of the main deity is in the form of Neela Lohitha Siva Lingam. The deity is accompanied by the idols of Sri Raja Rajeswari Devi and Siddi Vinayaka.

According to Puranas, the Sun God recovered from disability by praying at the shrine here .....

#2 of 4 Places to Visit in Vemulawada

At a distance of 1.5 km from Vemulawada Bus Stand, 0.5 km from Sri Raja Rajeshwara Temple(Vemulawada Temple), Sri Bhimeshwara Swamy Temple is one of the most important temples in Vemulawada.

Dedicated to Lord Shiva, this temple belongs to 9th century CE. It was built by Chalukya king Bhaddega during 850-895 CE. The temple is surrounded by a massive stone compound. This temple boasts wonderful is architecture. Built in the Nagara style, the temple is built on a raised platform with a mukhamandapa, an entrance hall and a Sanctum Sanctorum. The raised platform has a variety of rich carvings of Siva, Dasavataras and the Panchatantra stories.

Inside the mukhamandapa the four central pillars are taller than the rest of the pillars. The central pillar is a huge and massive one and the base of which contains extensive relief work on four sides that include Swans, Apsarasas, Elephants, etc. In the sanctum sanctorum houses a large .....

#3 of 4 Places to Visit in Vemulawada

At a distance of 1.5 km from Vemulawada Bus Stand, 0.5 km from Sri Raja Rajeshwara Temple, Sri Baddi Pochamma Temple is another important temple situated in Vemulawada.

Sri Baddi Pochamma Temple was built by Baddiga Bhupathi, a Rastrakuta King. This is ancient Sitala Devi Temple poularly known as Baddi Pochamma Temple. This temple is dedicated to Pochamma Devi, a village deity. The temple enshrines the granite image of Goddess Sitala Devi, with hands adorned with weapons. The walls of the temple are beautifully engraved with sculptures.

The pilgrims and villagers offer Bonalu (famous festival of offering in Telangana) to this deity for health and happiness.

#4 of 4 Places to Visit in Vemulawada

One the way to the Narasimha temple, there is a temple for Naga Devatha. The temple was built in a model of Snake. Visitors can enter the shrine through the snake's belly - a long, winding tunnel. There are statues depicting the story of Prahalada and Hiranyakasipu. At the end of the tunnel, the statue of Lord Narasimha killing the demon .....