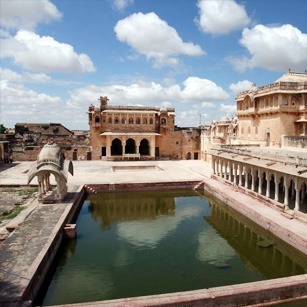 #1 of 12 Places to Visit in Karimnagar

The Nagunur fort was constructed in the period of Kakatiya dynasty. This fort was one of the important forts in Kakatiyas kingdom. The Fort contains ruins of many temples. The origin and style of these temples can be traced back to the era of the Kalyani Chalukyas and Kakatiyas. However, it is strongly believed to have been built during 12th and 13th centuries under the patronage of the Kakatiyas. At one point of time this place was believed to house around 400 temples.
.
The most important temple in the complex is the Shiva temple. The temple is made of red stone and consists of three shrines of Lord Shiva. The shrines are placed on a raised pedestal. The main entrance to the temple is on the northern side. The pillars and galleries around the Shiva temple here are worth seeing. The beams of the temple have sculptured images of musicians playing on Mridangam and other instruments. Panels are carved with visuals of dancers in graceful poses.