Bangkok, the capital city of Thailand is a bustling metropolis with a rich heritage and culture. Often called as the party capital of Southeast Asia, Bangkok is among the world’s top tourist destinations and also one of the top places to visit in Thailand as it is the gateway to Thai warmth and hospitality. From glittering temples to grand palaces, from floating markets to swanky shopping malls, and authentic Thai food, Bangkok has something for every traveller that can experience as part of Bangkok Tour Packages.

Here is the list of top 13 places to visit in Bangkok. 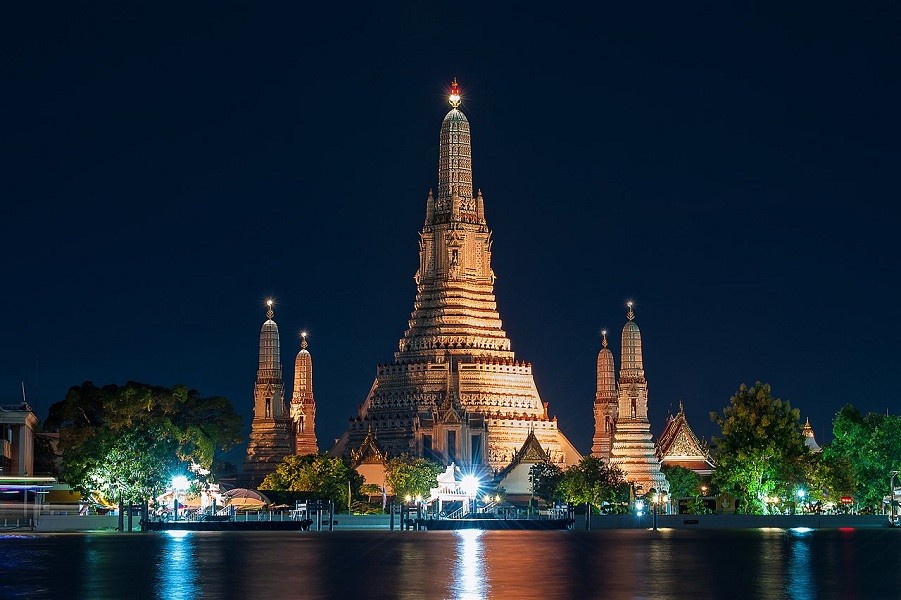 Situated opposite to the Grand Palace, across the Chao Phraya River, Wat Arun is a popular Buddhist temple in Bangkok that stands at 79 m tall. Also known as the ‘Temple of Dawn”, this is one of the stunning temples in Bangkok and among the best places to visit in Bangkok. Built in Khmer architectural style, the grand central prang at Wat Arun is surrounded by four smaller prangs. These five towers are beautifully decorated with vibrant porcelain and colorful ceramic tiles. The base of the grand prang is also adorned with sculptures of Chinese soldiers and animals. Despite its name, this magnificent temple looks more stunning during sunset as well as in the night when it lit up. 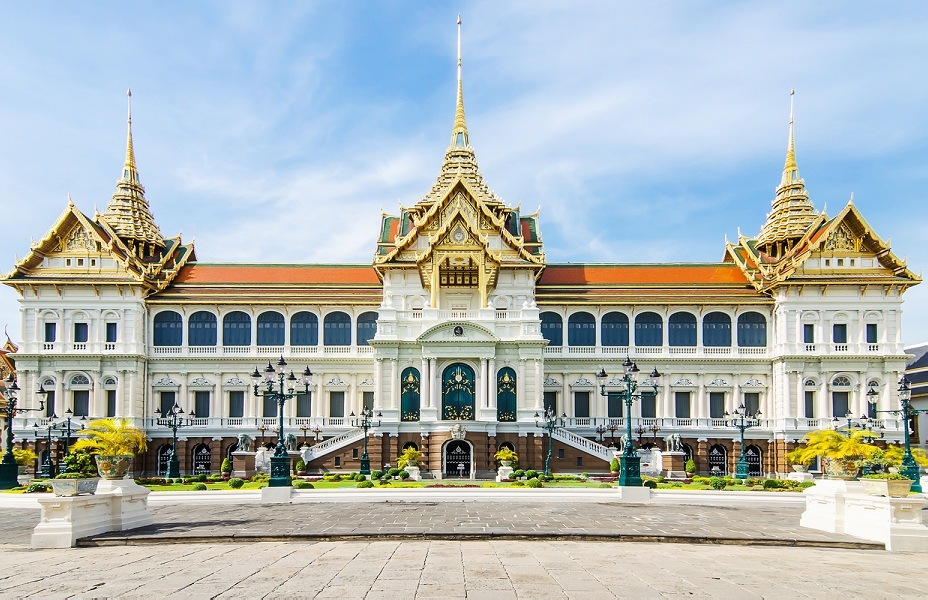 A Bangkok Trip is not complete without a visit to the magnificent Grand Palace in the heart of Bangkok city. Built in 1782, the Grand Palace was the erstwhile residence of the Kings of Siam and is still hosts royal ceremonies, state banquets and other official functions. A combination of Thai and European architecture, the complex consists of the several buildings, temples, gardens and courtyards. Dusit Maha Prasat Throne Hall and the Phra Maha Monthian are the two oldest buildings in the complex while Borom Phiman Mansion is the most recent addition which was built as a residence for future Kings. Visitors are not allowed into any of the buildings, but one can feel free to take a walk around the palace that displays exquisite decor with spiked pagoda styled roofs. Since this is a sacred place, visitors should cover their knees, shoulders and even feet. 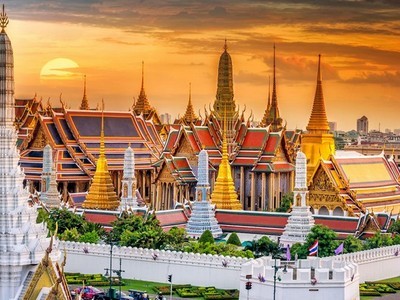 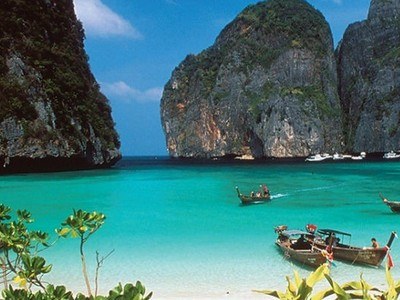 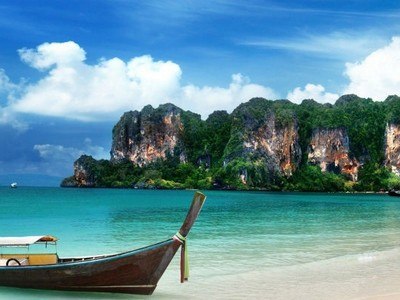 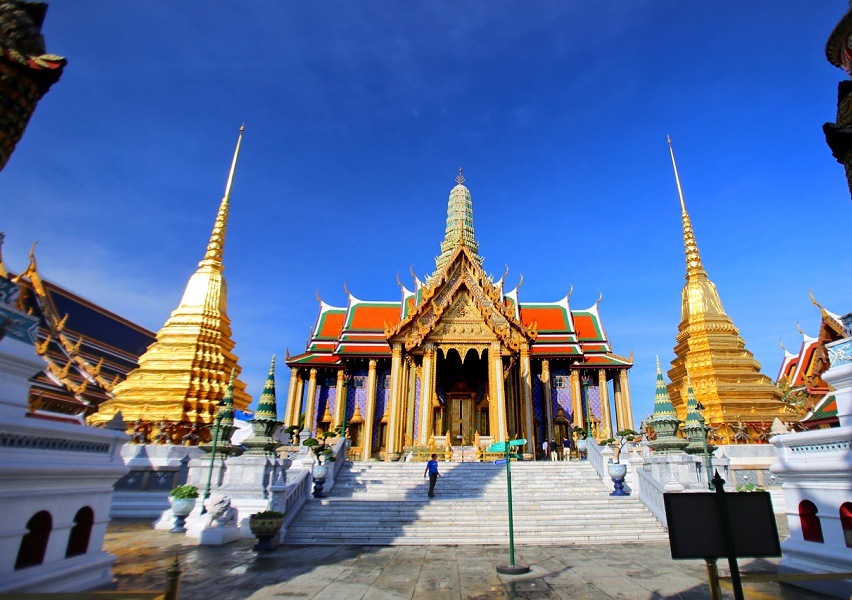 Situated within the Grand Palace grounds, Wat Phra Kaew or the Temple of the Emerald Buddha is the most sacred Buddhist Temples in Bangkok and among the must include places during your Thailand Tour Package. Dating from the 15th century AD, the temple enshrines the highly revered Emerald Buddha image in meditating posture in the style of the Lanna School of the northern Thailand. This 66 cm tall Emerald Buddha housed in the temple is considered to be the protector of Thailand. No one is allowed to touch the statue except the Thai King. The King changes the robes of the statue corresponding to the summer, winter, and rainy seasons, and is an important ritual performed here to bring good fortune to the country during each season. The walls of the temple are covered with mural paintings depicting the events in the life of Lord Buddha. Located to the south of the Grand Palace, Wat Pho or Wat Phra Chetuphon is one of the largest Buddhist temple complexes in Bangkok. Also known as the Temple of the Reclining Buddha, it is known worldwide for its giant reclining Buddha that measures 46 m long and is covered in gold leaf. The soles of the feet are decorated with numerous precious stones. In addition, the temple complex also houses 400 Buddha images, a colourful Chinese pavilion and a traditional Thai massage school. This is also a great place to get a Thai massage as it is regarded as the birthplace of traditional Thai massage. Damnoen Saduak Floating Market is a floating market on Damneon Canal in Ratchaburi area of Thailand. Established primarily as a tourist attraction, it is the most famous floating market in Thailand which draws a lot of tourists. The market consists of a maze of narrow canals where the boat vendors sell organic vegetables, fruits, fresh coconut juice and local food cooked from floating kitchens. Even though the prices are high, a guided boat tour of Damnoen Saduak market will give you an insight into a bygone way of life in Thailand. 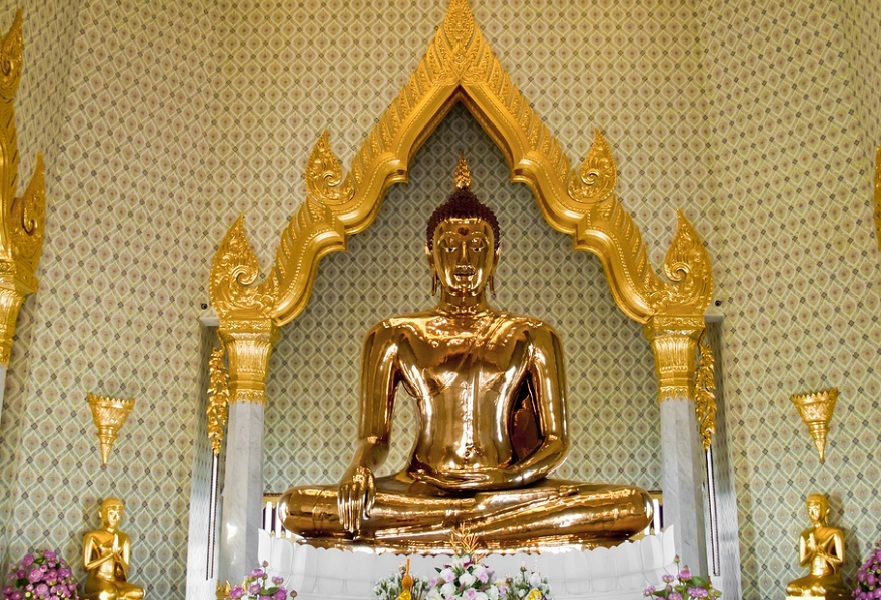 Located at the end of Yaowarat Road in Chinatown, Wat Traimit or the Temple of Golden Buddha is one of the most noteworthy temples in the city of Bangkok as it houses the world’s largest massive gold Buddha idol. The Sukhothai-style statue is about five meters in height and weighing five and a half tons. The awe-inspiring, gleaming statue of Buddha is one of the most striking in the world and a must-visit tourist attraction as part of your Bangkok Tour. This beautiful Buddha is housed in a 3 storey building named Phra Maha Mondop. The first floor contains a museum, the Chinatown Heritage center, the second floor contains an exhibition on the history of the Golden Buddha while the top floor of the Phra Maha Mondop contains the Golden Buddha image which was discovered accidentally in 1950. 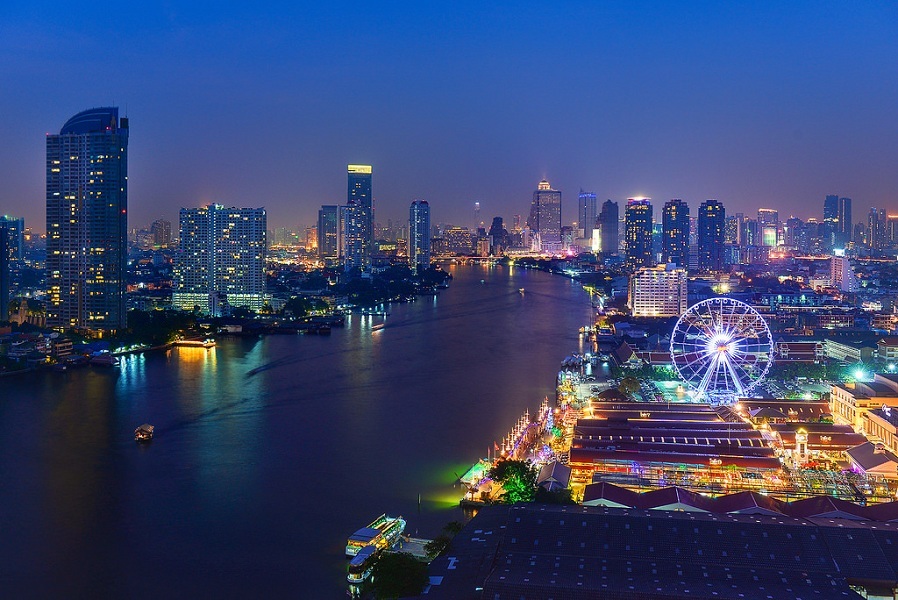 A Bangkok Tour is incomplete without sampling its distinctive traditional cuisine and Chao Phraya River cruise. Also known as the River of Kings, Chao Phraya, formed by four major tributaries including Ping, Wang, Yom, and Nan Rivers, has long been one of the most important waterways in Bangkok and also a source of livelihood for many locals. Taking a boat trip down the river is a fascinating experience as you will see some of the Bangkok’s most famous landmarks standing proudly on the banks of the river. Visitors can also experience the Chao Phraya River by taking a luxurious dinner cruise. The Dinner Cruises on the Chao Phraya River allow you to see the city from a different perspective as the sun goes down and the temples and palaces are lit up. 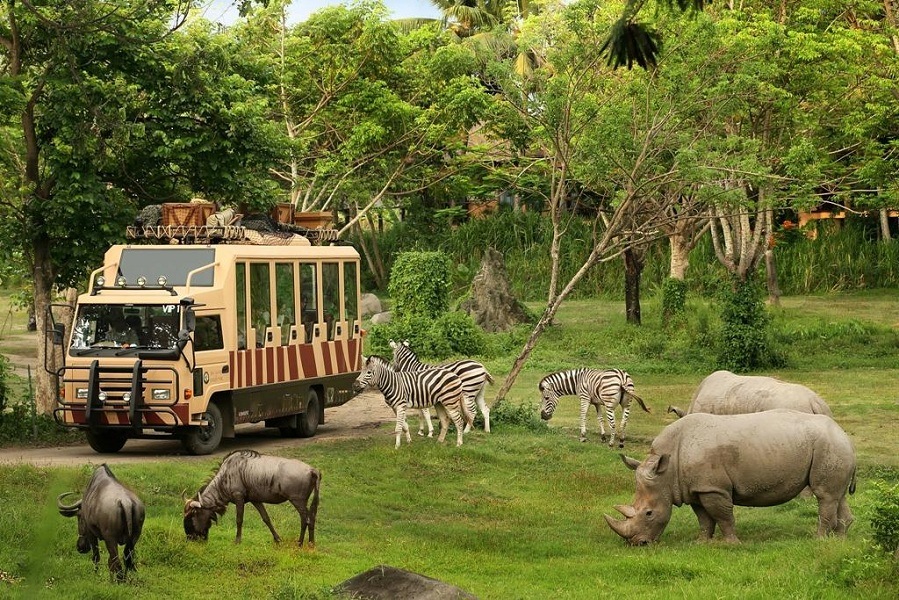 Spreads over an area of 480 acres, Safari World is an open zoo and leisure park in Bangkok. The park is divided into two parts namely Marine Park and Safari Park. Features hundreds of animals from all over the world, Safari World offers a great variety of entertainment for everyone from an exciting safari drive to an intimate encounter with friendly dolphins or an exhilarating fast-paced action stunt. Jungle Cruise, Wildlife Feeding Show, CDV War, Eggs World, Bollywood Cowboy Stunt Show and Orangutan Boxing Show are some of the major attractions here. Marine Park houses a rich variety of marine animals like dolphins, sea lions, and crocodiles. Often counted amongst the top Bangkok Tourist Places, Jim Thompson House is a museum which housing the art collection of Jim Thompson, an American businessman, architect and also the owner of the house who disappeared mysteriously from Cameron Highlands in Malaysia. He was a prominent figure in the Thai silk industry and he was also awarded the Order of the White Elephant for his contribution to the development of Thai Silk Industry. Built in 1959, the museum consists of six traditional Thai-style houses. There is a wonderful collection of artifacts, artworks and other souvenirs that James H.W. Thompson collected from Thailand, Burma, Cambodia and Laos. Centered around Yaowarat road, Chinatown in Bangkok is a bustling place of narrow streets, busy markets, Chinese temples and bright lights. It is a heaven for foodies, a paradise for Shopaholics, and an abode for the religious ones. Expect to find gold shops, small restaurants and thousands of open air market stalls during the day, while at night the area was loud and bright and busy with street food vendors who sell some authentic traditional Chinese/Thai dishes at good prices. hinatown is one of the best places to try Thai cuisine in Bangkok. Plan your visit to Bangkok during Chinese New Year, be sure to visit Chinatown and watch the lion dancers and fireworks. Lumpini Park is the largest public park in Bangkok and is an ideal place for basking in the bliss of tranquility, fresh breeze, and nature’s shade. Covering an area of about 142 acres of land, the park offers rare open public space, trees, and playgrounds along with an artificial lake where visitors can rent boats. The park is popular for outdoor leisure activities such as exercising, doing Tai Chi, playing games and music, learning social dancing, reading books in the library and so on. Besides, this park is famed for monitor lizards. This lush green park is also an ideal place to hang out with friends or even plan for a picnic. Situated on the former grounds of Wang Na Palace near Grand Palace, the Bangkok National Museum is the first National Museum in Thailand and also one of the largest museums in Southeast Asia. The museum was originally established by King Rama V to exhibit the private collection of his father King Rama IV in 1874 at the Concordia Pavilion inside the Grand Palace and was moved to its present location in 1887. From the largest collection of Thai artifacts to a good sneak peek into the country’s history, the Bangkok National Museum exhibits so many things in its three permanent galleries. It also houses one of the best collections of Buddhist and devotional art along with some pieces belonging to the Thai royal family. Madame Tussauds is a wax museum located in the Siam Discovery in Bangkok. This is the 10th Madam Tussauds museum in the World and is amongst the must include in your Bangkok Packages. Madame Tussauds museum in Bangkok gives you a chance to pose with the wax statues of world celebrities, heads of state, activists, sports persons, legendary artists, and even royalty. The museum is divided into 10 zones with a collection of 70 wax statues of famous people from across the world. The most elegant and famous among them is the Royal Room as it displays the wax figures of His Royal Highness, Prince Mahitala Thibed Adulyadej and Her Royal Highness, Princess Srinagarindra, the late parents of His Majesty, the King while the most photographed statue is that of the Oval Office, with the U.S. President Barack Obama and his wife Michelle Obama.

3 thoughts on “13 Most Popular Tourist Places in Bangkok”