Perched on the Gulf coastline, Dubai is the capital of the Emirate of Dubai, one of the seven emirates in the United Arab Emirates (UAE). This luxurious city sits in the middle of the Arabian Desert, surrounded on one side by dry sand and the beautiful Persian Gulf on other side. Dubai is the business hub of the Middle East and also the fourth most visited tourist destination in the world. It is famous for booming businesses, high-rising architectural wonders, palm shaped islands, captivating attractions and colorful nightlife. Always bustling with energy, the fascinating city of Dubai offers several exciting activities for visitors of all ages as part of Dubai Tour Packages. Here is the list of 15 top things to do in Dubai.

Go up the Burj Khalifa 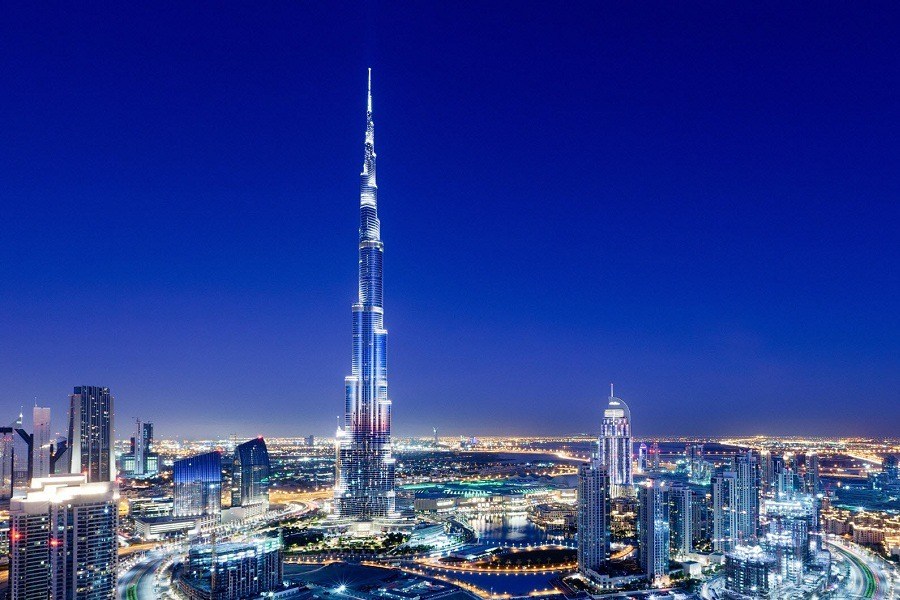 Standing 828 m high, Burj Khalifa is the most iconic and tallest building in the world from where one can get the mesmerizing views of the Dubai City. Comprising of 163 floors, this mega tower displaying neo-futuristic architecture with two observation decks at 124th & 148th floor. Situated on 148th floor at a soaring height of 555 m, At the Top Sky is currently the highest observation deck in the world and delivers stunning view of the Dubai city, Palm Jumeirah and Dubai Marina. The place draws hundreds of people daily to marvel at the views from this observation deck and it is said that, a Dubai tour is not complete without a visit to the wonderful Burj Khalifa.

Step back in time at Al Bastakia 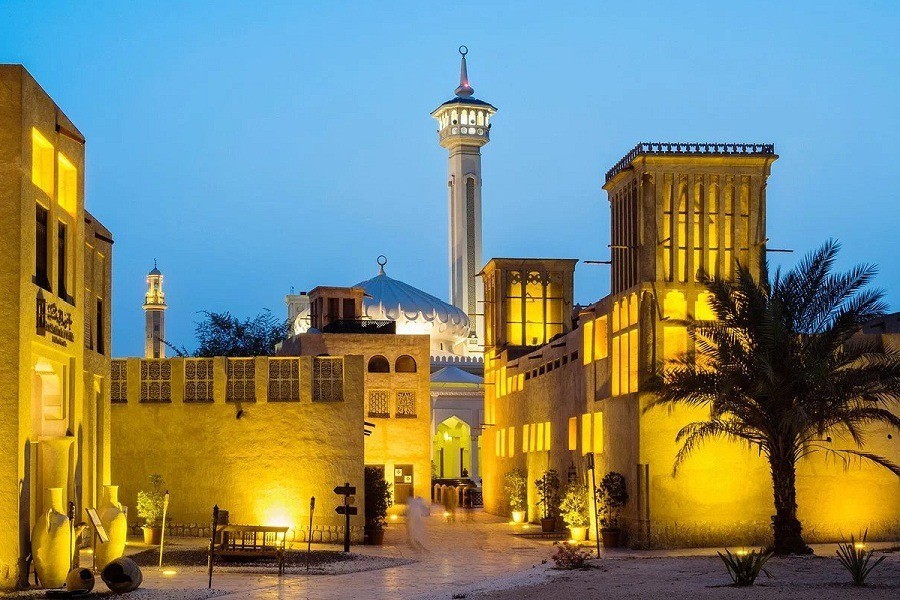 Also known as the Al Fahidi Historic District of Dubai, Bastakia Quarter in Bur Dubai is one of the oldest and most picturesque heritage sites in Dubai. Situated along the Dubai Creek, this village was built in the late 19th century by Persian merchants due to its relaxed trade tariffs. This place gets its name from Bastak, Iran, the origin of many of the traders who first plied their trades. Tourists will notice ancient style of houses with wind towers, beautifully carved wooden doors and wooden lattices while walking on the narrow winding lanes of Al Bastakia village. Now, many of the houses are open to public in the form of Dubai Museum, Arabian Tea House, Majlis Gallery and Ostra. 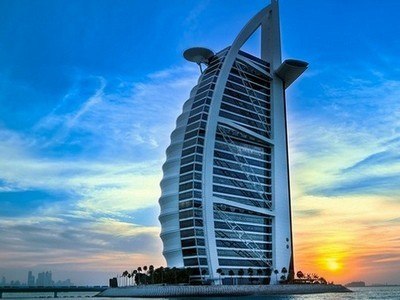 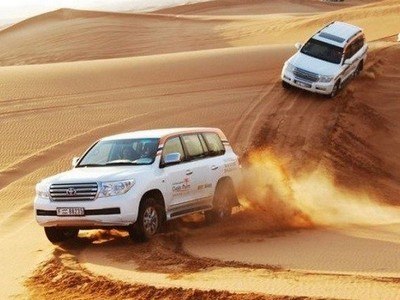 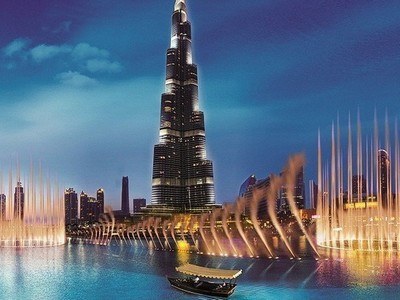 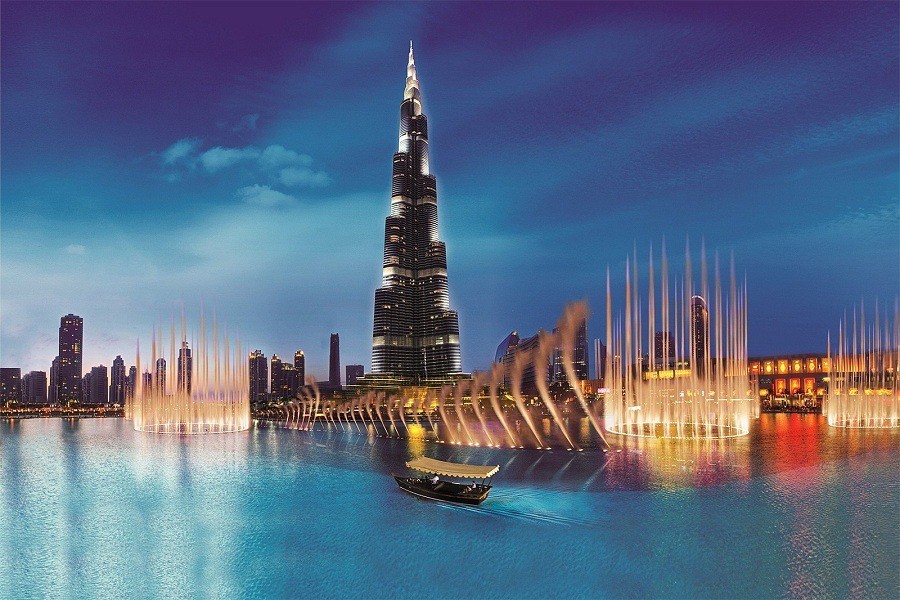 Situated at the base of the iconic Burj Khalifa, the Dubai Fountain features the largest choreographed fountain system in the world equipped with 6600 lights and 25 coloured projectors. Submerged within the 30-acre Burj Lake in front of Dubai Mall, it consists of five circles of different sizes and two arcs of jets. During the show, these powerful jets shoot water sprays to a height of up to 150 meters in the air with the soothing music of traditional Arabic or contemporary style.  The Dubai Fountain offers a once-in-a-lifetime opportunity for its visitors completely free and is a must include in your honeymoon packages.

Take a safari in the Desert 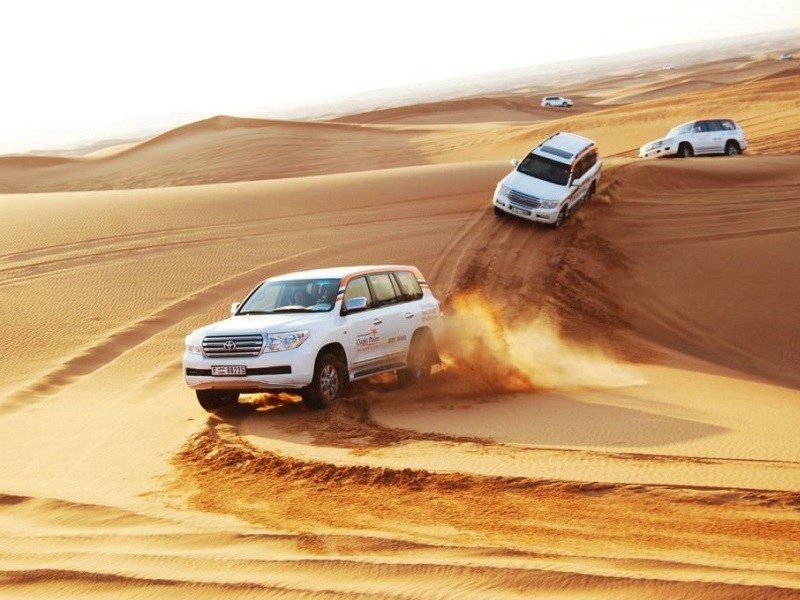 Desert Safari, among the most popular activities to do in Dubai, is a mix of adventure, cultural entertainment and sumptuous dinner under the stars. A desert safari in Dubai offers the chance to get a flavor of the old Bedouin lifestyle. This ultimate safari is synonym for the adventurous ride in Red Dunes of Dubai in a typical 4 wheel vehicle. Once in the desert, you can also get the opportunity to ride a camel, walk over desert sand, Sand boarding, put on Arabic attire, adorn your hands with traditional henna designs, and take pictures of falcon sitting on your shoulder. During night safari, visitors will get a chance to enjoy the live shows such as Live Belly Dance, Tanura Dance and Fire Show, along with finest Arabian cuisine.

Shop at the Dubai Mall 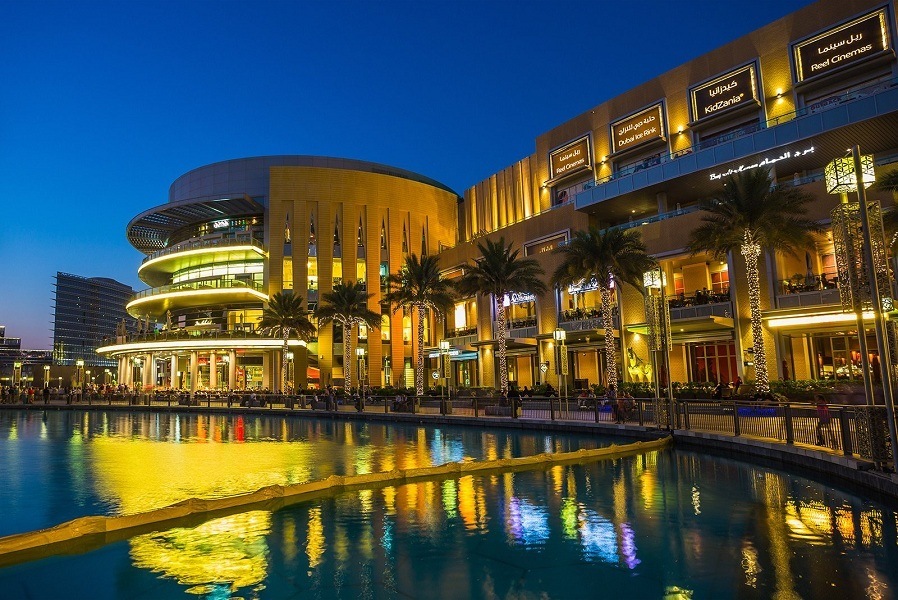 Situated next to Burj Khalifa, Dubai Mall is the world’s largest shopping mall which covers more than 1 million square meters. The mall features around 1200 stores, two anchor department stores and hundreds of food and beverage outlets. Shopaholics will rejoice at the Dubai Mall as it offers everything from makeup to home furniture and from branded to regular outfits. Besides, the Dubai Mall is the ultimate family entertainment destination as it is home to an indoor theme park, an ice rink, a huge indoor waterfall, a choreographed outdoor fountain and the giant Dubai Aquarium and Underwater Zoo. 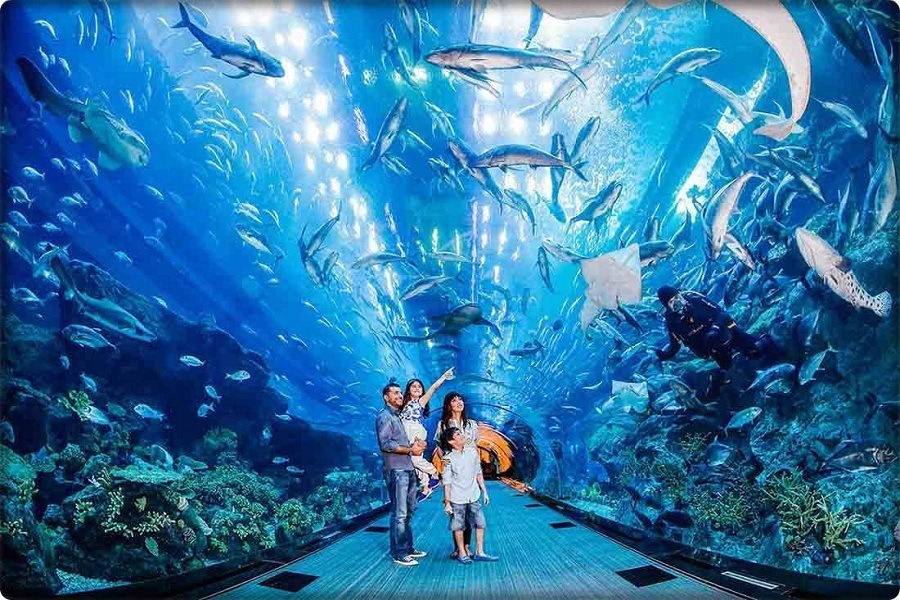 Want to discover the marvels of underwater in Dubai then Dubai Aquarium & Underwater Zoo located in Dubai Mall is the best place for you during Dubai Tour. This is one of the most iconic attractions in Dubai and among the largest indoor aquariums in the World. It has won a Guinness World Record for the world’s “Largest Acrylic Panel”. The 10-million litre Dubai Aquarium tank houses over 33,000 aquatic animals of nearly 140 species. Over 300 Sharks and Rays live in this aquarium including the largest collection of Sand Tiger Sharks in the world. The Underwater Zoo, situated just above the Dubai Aquarium, is home to penguins, piranhas, crabs, water rats, seahorses, jellyfish and many more. 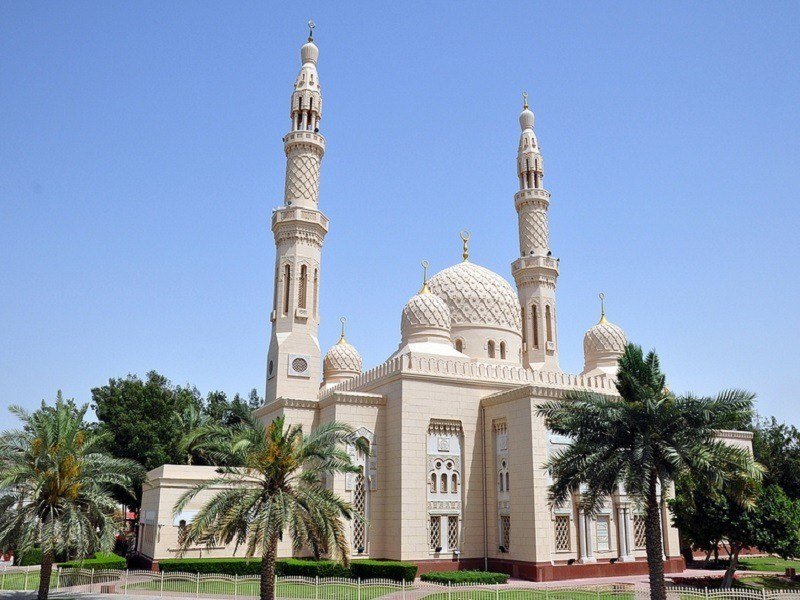 Also known as ‘the two minaret mosque’, Jumeirah Mosque is one of the most beautiful mosques in the United Arab Emirates and the most photographed mosque in all of Dubai. Besides, this is only mosque in Dubai which is open to non-Muslims. Built in 1976, the Mosque was constructed in Fatimid style, with towering twin minarets framing a large central dome. The Sheikh Mohammad Centre for Cultural Understanding has been organizing Jumeirah Mosque tours for non-Muslims over the past ten years as part of its Open Doors, Open Minds policy, designed to bring different nationalities together.

Abra Ride on the Creek Cruise 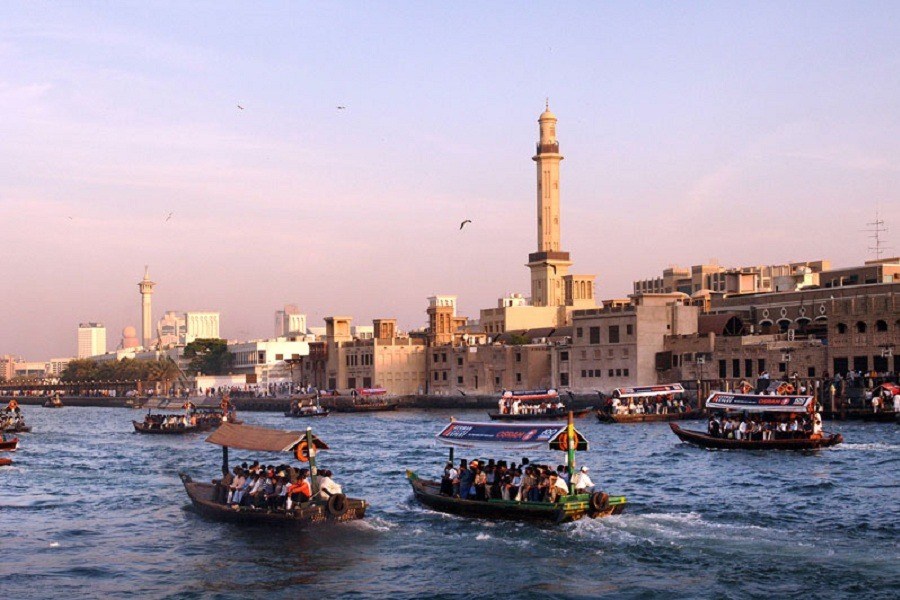 Besides Dubai’s glitz and glamour of sky-high towers, crossing the Dubai Creek by Abra is one among the popular things to do in Dubai. Dubai Creek is the natural seawater estuary from the Arabian Gulf that divides the city into two main sections – Deira and Bur Dubai. Originally facilitating trade with India and Africa, the creek has played a major role in the history of Dubai. This is the original site where the Bani Yas tribe settled & established the Al Maktoum dynasty in the city during 19th century. Though there are several ways to explore the creek, travel along the water in a traditional style abra is memorable. 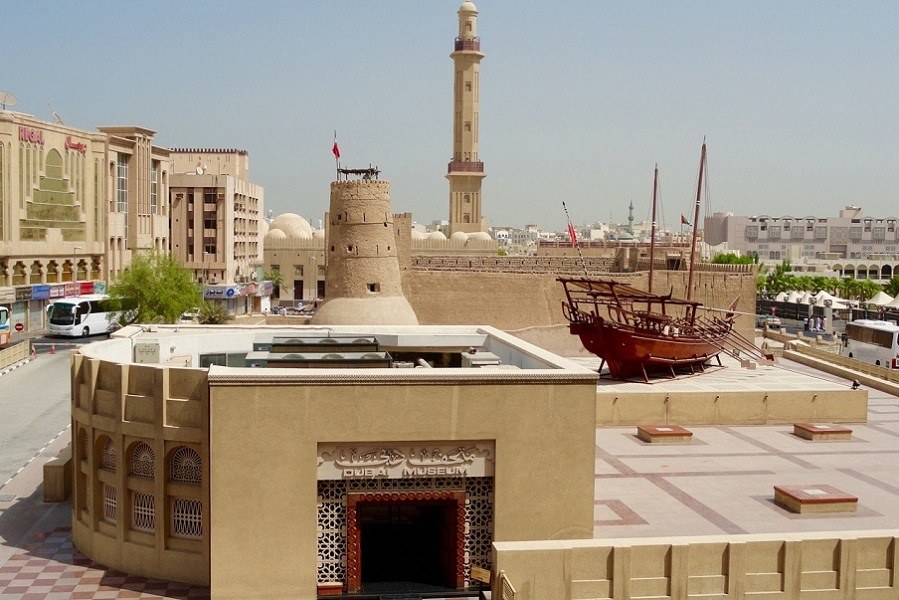 If you are a history lover then Dubai Museum is the right place to visit in Dubai as it offers a glimpse of the Emirate’s history and traditional culture. The Dubai Museum is housed in the Al Fahidi Fort, the oldest existing building in the city. Al Fahidi Fort was served as the residence of the local rulers until 1896 and was converted into museum in 1971. The museum features galleries that recreate historic Arab houses, Mosques, Souks, date farms, desert and marine life. Besides, there is also the astronomy and natural phenomena wing along with a sea wing that takes the visitor on a breathtaking tour to get to know shipbuilding and the manufacture of shipping equipment, the profession of pearl diving and the marine life. 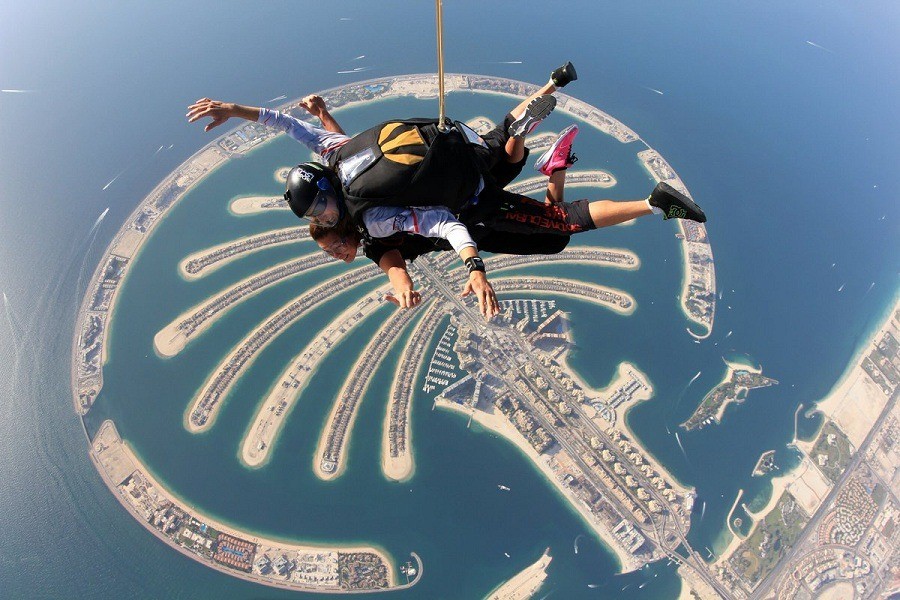 Are you looking for an adrenaline adventure experience in the city of Dubai? Then, experience the ultimate aerial adventure in Dubai, by taking a sky dive over a thousand feet above the ground. With world class facilities, stunning locations and expert instructors, Skydiving in Dubai become the most captivating attractions of the city. No Dubai Trip is complete without this thrilling expedition. During Skidive, one can get the prominent views of Ain Dubai, the Palm Jumeirah Island, Atlantis Hotel, Burj Al Arab and Dubai Marina. All skydiving operations in Dubai are managed by Skydive Dubai and this is an extremely weather dependent sport.

3 thoughts on “10 Exciting Things to do in Dubai”