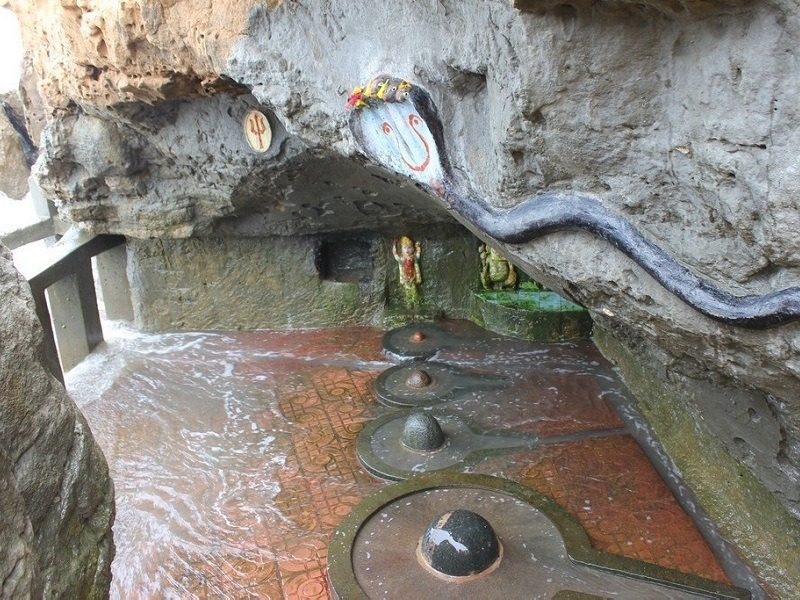 At a distance of 3 km from Diu Bus Station, Gangeshwar Mahadev Temple is an ancient Hindu temple located at Fudam village in Diu. Situated on the Arabian Sea coast, it is one of the important places of pilgrimage in Diu and among the must visit places as part of Diu Tour Packages.

Situated amidst serenity and scenic beauty, the Gangeshwar Temple is dedicated to Lord Shiva, the transformer of Hindu trinity. Here the presiding deity is called Gangeshwar, who is considered to be the Lord of River Ganga since it descended to the earth from the tresses of Lord Shiva. The Gangeshwar Mahadev Temple is more than 5000 years old. It is basically a cave temple located in the midst of rocks on the seashore.

The shrine has five Shivalingas of different sizes which are believed to have been installed by the Pandava brothers during their exile period. These Shivlingas are constantly washed by the lapping waves of the Arabian Sea and one has to touch the Lord when the waves are returning. The mystical scene of the waves of the ocean offering obeisance to Lord Shiva inspires deep feelings of spiritual reverence and devotion among the visitors. Lord Ganesha, Lord Vishnu, and Goddess Lakshmi can be found at the entrance of the Gangeshwar temple. There was no priest and whatever you offer to God is washed away by the sea within seconds.