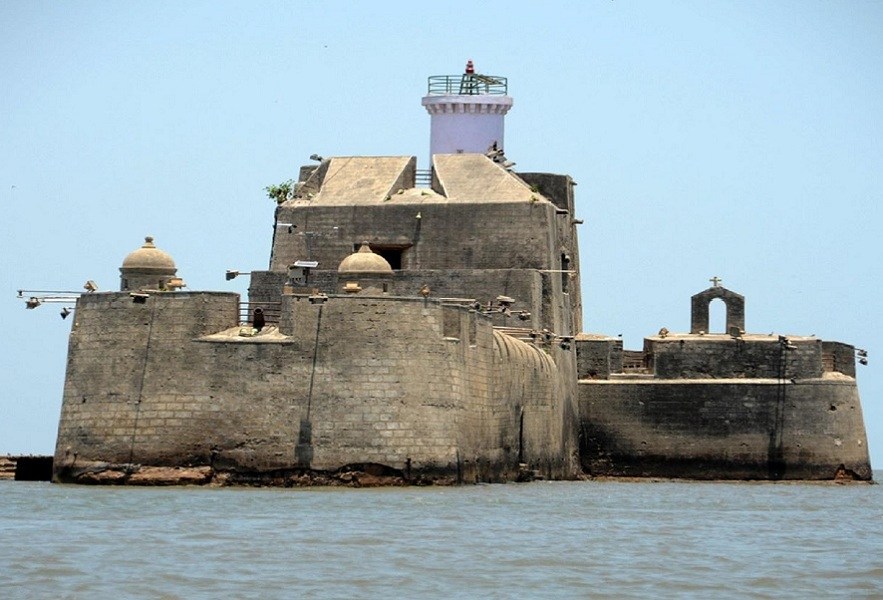 Place Location: On An Islet In The Arabian Sea

At a distance of 3 km from Diu Bus Station, Pani Kotha is a small ruined fort located on an islet in the Arabian Sea near Diu. It is one of two historical forts in Diu and among the must-visit places in Diu for history buffs.

Also known as Fortim-do-Mar, Pani Kotha Fort is a beautiful stone structure in the sea, built right at the mouth of the creek. It was built during the Muslim domain by Malik Aiyaz and it served as an entry post to control the movement of the Merchant Ships entering Diu for trading. This is also served as the jail during the Portuguese colonial rule.

Surrounded by the Arabian Sea, it was built with stones to resemble the structure of a ship to mislead invaders. Pani Kota stands for a fort built in the water. The fort of Pani Kota is controlled by the Portuguese along the main Diu Fort. Due to its strategic importance, they fortified it by adding further structure in the year 1588 as ordered by the Captain of the Fort, Aires Falcao. A stone inscription is found even today affixed on the wall inside the Fortress about this. The Portuguese also erected a small Chapel in the fort in 1638, dedicated to Our Lady of Victory. This was done in memory of the victory of the Portuguese over the Dutch as per the stone inscription found affixed to the wall of the Chapel. The fort also has barracks for the inmates, a warehouse, a cistern and residence for the Commander. Besides these, there is a lighthouse built on the Menagem Bastion.

The Fortress of Pani Kotha is about one nautical mile from Diu Jetty and can be reached only by a motor boat. Located in the middle of the sea, the Fortress makes for a beautiful view whether seen from the Jetty, from the Fort, from Ghoghla village or from Diu. This Fortress has been illuminated with special light effects giving it a mesmerizing beauty at night.