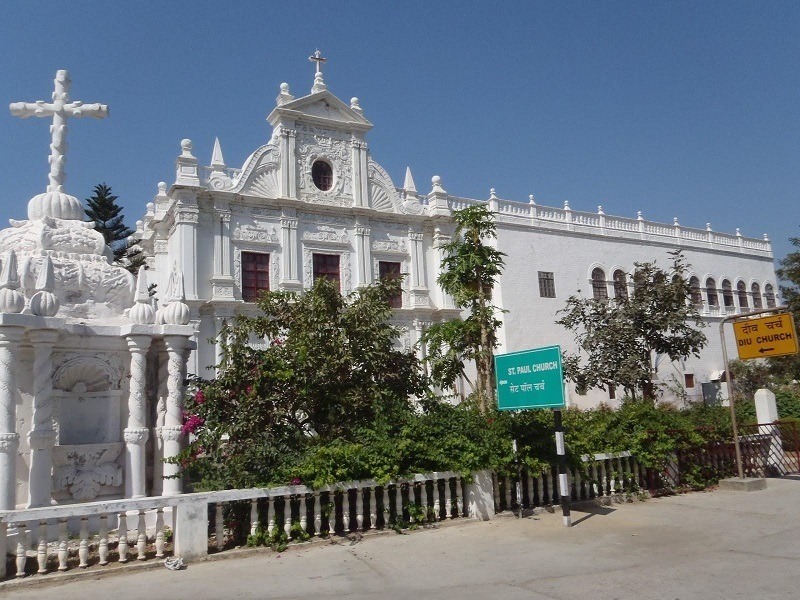 At a distance of 2 km from Diu Bus Station, St. Paul's Church is an ancient church situated in Diu Island, on the west coast of India. It is one of the oldest churches in India and among the most visited places in Diu.

The St. Paul's Church is one of the three churches built by the Portuguese in Diu and is solely dedicated to 'Our Lady of Immaculate Conception'. The construction of the church was started in 1601 and finished in 1610. Named after St. Paul, the Apostle of Jesus also known as the Apostle to the Gentiles, it is said to be the largest and the only functioning church in Diu till date.

Built in the Baroque architectural style, this 400 years old church of St. Paul exhibits strong similarity but with better workmanship and design than the Basilica of Bom Jesus at Goa, which was also built by the Portuguese in 1605 AD. Renowned all over the world for its stunning architecture by Indian craftsmen, the church boasts of rich wood carvings, splendid facade, intriguing volutes, and shell-like motifs. The front elevation or facade is also said to be the most detailed of all Portuguese churches built in India.

The altar, which has the image of St. Mary, is carved out of a single piece of Burmese teak and is lined and lit up with 101 candles. Above the altar, there is a blue and white barrel-vaulted nave adorned with priceless old paintings and statues. The exterior of the church, with carved designs in white stucco, worked out by the native artisans, is as much impressive as the interior in respect of elaborate detail in the design.

The Feast of the Eleven Thousand Virgins to mark the commencement of the school year and the other one on 25th January to mark the conversion of St. Paul are the two important religious events associated with this church and lots of Christians attend these joyous events.