Travel Tips: Being a religious place, visitors need to wear appropriate dress preferably full lengh clothes. For men dhoti or pants and shirt, and for women saree, half-saree, salwar-kameez, set-mundu or skirt and blouse is suitable.

At a distance of 3 km from Udupi Railway Station, Sri Krishna Temple is a Hindu temple situated in Udupi, Karnataka. It is one of the famous pilgrimage centers in India, and among the must include places in Udupi Tour Packages.

The Krishna Temple was founded by the Vaishnavite saint Shri Madhvacharya in the 13th century CE. Among the most famous places to visit in Udupi, the Krishna Temple or the Udupi Sri Krishna Matha is one of the most auspicious temples dedicated to Lord Krishna. The unique feature of this temple is that the Lord is worshipped only through a window with nine holes called the Navagraha Kindi. The daily sevas and administration of the Mutt are managed by the Ashta Mathas. During the Paryaya festival, held every two years, the temple management is handed over to the next Matha.

This temple has a fascinating idol of Lord Krishna that is richly adorned with jewels & a famous golden chariot. According to legend, the famous architect, Vishwakarma made an idol of Lord Krishna, which was later discovered by Madhvacharya. One day while the saint was performing his daily morning prayer on the shore of Malpe Beach, he was made aware that a ship sailing in the sea was in danger due to inclement weather. Shree Madhwacharya, with his divine powers, saved the ship from sinking and recovered the idol of Krishna covered in a ball of gopichandana. The deity is placed facing towards the west (Paschimabhimukha) which is different from the usual placing of God's idols, i.e. facing towards the east.

Devotees always have darshan of Lord Krishna through the inner window, known as the Navagraha Kindi & the outer window known as the Kanakana Kindi or the Window of Kanakadasa. Legend has it that in the 16th century there lived an ardent devotee of the Lord who was denied his darshan. As a sign of protest, he started praying with intense devotion at the back of the temple. Overwhelmed by his devotion, Lord Krishna created a hole in the wall and made his idol facing east turn towards the west so that Kanaka could worship the Lord. One can also visit Chandamouleeswara and Anantheshwara Temples adjacent to Sri Krishna Temple that are about 2000 years old.

Saptotsava or the Seven Utsavas celebrated in January is considered the annual festival of Sri Krishna Temple. Krishnashtami, Raamanavami, Hanumajjayanthi, & Deepavali are other important festivals here. 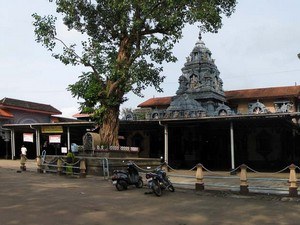