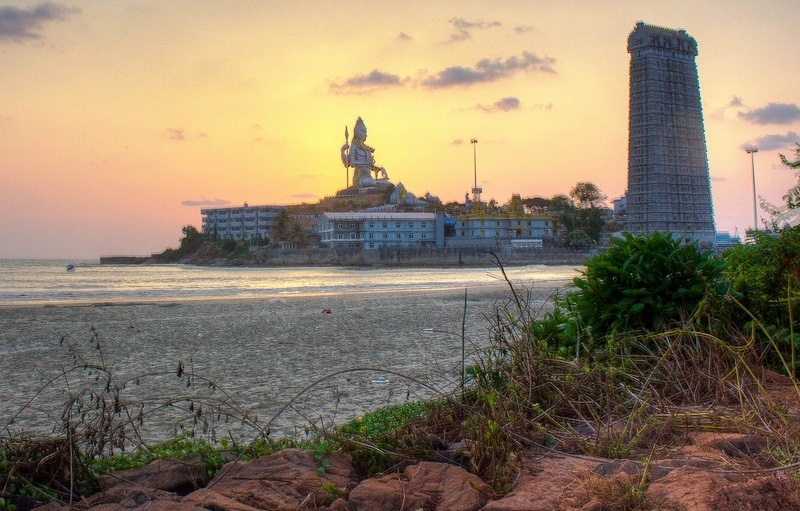 At a distance of 76 km from Gokarna, 113 km from Karwar, 162 km from Mangalore, 188 km from Shimoga, 214 km from Panjim, 219 km from Hubli, & 497 km from Bangalore, Murudeshwar is a well-known pilgrimage town located in the Uttara Kannada district of Karnataka. Situated between Honnavar and Bhatkal, it is one of the most must include places in Karnataka Tour Packages, and among the places to visit near Mangalore.

The Murudeshwar town was earlier known as 'Mrideshwara'. It was later renamed as Murudeshwar after the construction of the Murudeshwar temple, one of the famous places of pilgrimage in India, and among the must-include places in Murudeshwar tour packages. According to the legend, Ravana brought the Atma Lingam from Mount Kailash. Lord Ganesha using his trick fooled Ravana on his way to Lanka and put down the Linga on the ground at Gokarna. Angered by this, Ravana tried to uproot and destroy the Linga. The broken pieces of the lingam were cast away. The covering cloth of the lingam fell at Kanduka Giri and the Murudeshwar temple was built at the site. Murudeswar can be visited along with Gokarna tour packages.

Murudeshwar is famous for the world's second-tallest Shiva statue (123 ft) & tallest temple tower (249 ft) of Murudeshwar Temple. The sea on three sides surrounds the temple towering on the small hill called Kanduka Giri. This is a great place to watch the sunset. Murudeshwar Fort, Murudeshwar Beach, and Netrani Island are the other places prominent Murudeshwar Tourist Places. Sirsi, Karwar, Gokarna, Kollur, Udupi, Mangalore, Dharmasthala and Subramanya are the nearby attractions here.

Maha Shivaratri during February is an important festival celebrated here with much devotion and religious rituals.

The best time to visit Murudeshwar is from November to February. Usually, it takes 1-2 days to explore the important places in and around Murudeshwar. There are also 4-5 days Udupi tour packages. that cover Murudeshwar, Gokarna, and Udupi.

How to Reach Murudeshwar - Full Details

Top 10 Places to Visit in Murudeshwar

#1 of 20 Places to Visit in Murudeshwar

At a distance of 2 km from Murudeshwar Railway Station, Murudeshwar Temple is an ancient Hindu temple situated at Murudeshwar, Karnataka. It is one of the popular places of pilgrimage in Karnataka, and among the must include places Murudeshwar Tour Packages.

Murudeshwar Temple is dedicated to Lord Shiva and is one of the main places to visit in Murudeshwar. The town was earlier known as 'Mrideshwara' and later renamed as Murudeshwar after the construction of the temple.

According to the legend, Ravana brought the Atma Lingam from Mount Kailash. Lord Ganesha using his trick fooled Ravana on his way to Lanka and put down the Linga on the ground at Gokarna. Angered by this, Ravana tried to uproot and destroy the Linga. The broken pieces .....

#2 of 20 Places to Visit in Murudeshwar

The statue was built by Shivamogga's Kashinath and several other sculptors, financed by businessman Mr R.N. Shetty, at a cost of approximately 50 million rupees. It took about 2 years to build the statue. The statue carved with so much attention to detail. There are many life-size statues of Gods and Demons around the Shiva statue. The Geetopadesha, Sun chariot, the sculpture of Lord Ganesh receiving the Atma Linga from Ravana and others dot the landscape of the Kanduka hill. On .....

#3 of 20 Places to Visit in Murudeshwar

At a distance of 2 km from Murudeshwar Railway Station, Murudeshwar Beach is a beautiful beach situated just beside the Kanduka Giri in Murudeshwar. It is one of the prime places to visit in Murudeshwar, and among the best beaches in Karnataka.

The serene Murudeshwar Beach is located near Murudeshwar Temple. This is a splendid and clean beach surrounded by hills, the wide Arabian Sea on the west, coconut and areca groves close by, attracts tourists throughout the year as part of Murudeshwar Tour Packages.

Travellers can indulge in swimming, fishing, and sunbathing at this beach. The waters here are cool and gentle waves for swimming, but strong currents do frequent the shores during high tides. Moreover, family boat .....

#4 of 20 Places to Visit in Murudeshwar

This temple is dedicated to Goddess Parvathi. According to Legend, Goddess Parvathi killed a demon called Kamsasuran who lived here and attempted to become powerful through his penance. Devi along with the help of Veerabadra, .....

#5 of 20 Places to Visit in Murudeshwar

At a distance of 14 km from Honavar, and 15 km from Murudeshwar, Ganapati Temple is a Hidu temple situated at Idagunji village near Murudeshwar. It is one of the famous temples in this region, and among the popular places to visit in Murudeshwar.

Located on the left bank of River Sharawati, the Idagunji Temple is dedicated to Lord Ganesha. According to the legend, Lord Ganapati stayed in this place which was known as Kunjaranya. It is said to be a place of penance selected by ancient Rishis. The importance of Idagunji is mentioned in the Skanda Purana. This temple is one of the major pilgrimage centers in Karnataka and attracts more than 1 million devotees per year.

Lord Vinayaka can be seen here in a standing posture, which is a rare sight. Vinayaka Chathurthi is the major festival celebrated here. Idagunji can be reached by bus from Honavar .....

#6 of 20 Places to Visit in Murudeshwar

At a distance of 500 m from Apsara Konda Bus Stop, 7 km from Honavar, 28 km from Kumta and 20 km from Murudeshwar, Apsara Konda Falls is a small waterfall located in the Uttara Kannada (North Canara) district of Karnataka. It is one of the scenic tourist places near Murudeshwar.

The water cascades down from a height of 10 meters into a pond below. The specialty of this pond is that it faces the sea and appears like a lagoon. People say that Angels used to come from heaven and take bath in that pond, hence the name Apsara Konda. Reaching the base of the waterfall is an easy as steps have been built to make the trail easier for the public. A unique fact about the waterfall is that the water flows down through the roots of a peepal tree while descending to the pond below. The pond is very safe for swimming and playing.

Just few mins walk from the falls is a magnificent hill which has a viewpoint. The hill and beach offer a beautiful view of sunset. Apsara Konda Hill contains many .....

#7 of 20 Places to Visit in Murudeshwar

#8 of 20 Places to Visit in Murudeshwar

At a distance of 21 km from Ankola, 58 km from Karwar, 75 km from Murudeshwar, 163 km from Panjim, 165 km from Hubli, and 514 km from Bangalore, Gokarna is a small town in the Uttara Kannada district of Karnataka. It is one of the top places to visit in Karnataka, and among the must-visit places as part of Goa packages.

Gokarna is considered one of the famous places of pilgrimage in Karnataka, and among the well-known places to visit near Hubli. Sri Mahabaleshwar Temple which houses the Atmalinga is the must include place in Gokarna tour packages. The Atmalinga was given to Ravana by Lord Shiva himself. Ravana was stopped here for his evening prayers while going back to Lanka. He had been instructed by Lord Shiva not to keep the Atmalinga on the ground, since it would be fixed wherever it touched .....

#9 of 20 Places to Visit in Murudeshwar

The top of the island is a plateau covered with dry grass and trees. The island has .....

#10 of 20 Places to Visit in Murudeshwar