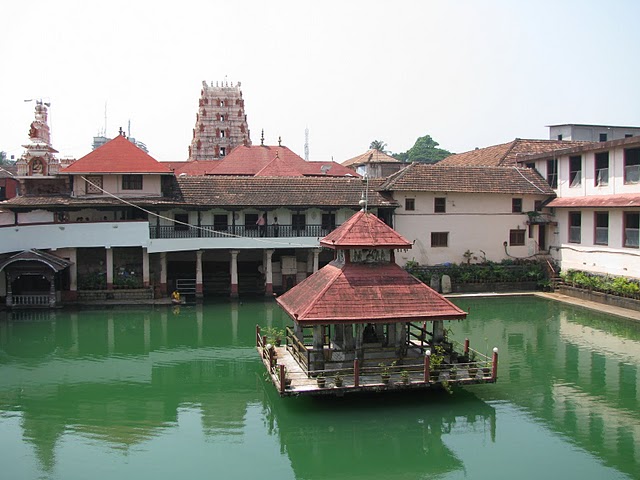 At a distance of 65 km from Mangalore, 102 km from Murudeshwar, 147 km from Shimoga, 309 km from Mysore and 403 km from Bangalore, Udupi is a famous temple town and headquarters of the Udupi District. It is also the source of Udupi cuisine which is famous across the world. It is also one of the most famous tourist places to visit in Karnataka, mainly for it's pilgrimage importance and beautiful beaches.

The name of this city was originated from Odipu. According to local legend, the 27 stars of the Hindu astrology were married to the Moon and soon after, the Moon lost its luster. As Lord Shiva is the last resort for everyone, the Moon and the stars created a Lingam and offered puja. Udu means Lord and Pa means Stars in Sanskrit.

Udupi is the land of breathtaking beauty, located between the verdant mountains of the Western Ghats and the Arabian Sea. Udupi is famous for Sri Krishna Temple. The Udupi Krishna Math was established in the 13th century by the great philosopher, Madhavacharya. The temple attracts pilgrims from all over India and is also a center for the Dvaita philosophy. This temple has a fascinating idol of Lord Krishna that is richly adorned with jewels. Famous Hindu saints such as Chaitanya, Purandaradasa and Kanakadasa visited this temple for the darshan of Lord Krishna. Another attraction of Sri Krishna Temple is the Kanakana Kindi, a small window through which Lord Krishna is believed to have given darshan to his devotee, Kanakadasa.

There is also another temple dedicated to Lord Shiva, believed to be more than 1000 years old, located near Yellur. Udupi is also famous for the wonderful beaches including Malpe Beach, Kaup Beach & St. Mary's Island. Being part of the Tulu Nadu, Tulu is the main language spoken in this region

Udupi is synonymous with the world-famous Udupi cuisine, which is served all over India in the efficiently-run Udupi restaurants, famous for dosas, idlis and other snacks. The tradition of this cuisine started in the great kitchens of the Krishna Temple which serve meals in the form of prasada to the thousands of devotees who come to pray at the holy shrine.

The most popular festivals include the Paryaya festival held every alternate year; the last being held in 2014. The festival is organized on January 18 and attracts large number of devotees. The roads are flooded with chariots with processions that display cultural shows such as folk dances and religious hymns. Holi, Ramanavami, Rathasaptami, Krishna Janmastami, Dusshera and Diwali are the other festivals that are celebrated with great enthusiasm.

The best time to visit Udupi is from October to March while the peak Season is from November to February. Usually it takes 2 days to visit places in and around Udupi.

How to Reach Udupi - Full Details

Top 10 Places to Visit in Udupi

At a distance of 3 Kms from Udupi Railway Station, Udupi Sri Krishna Temple is one of the famous pilgrimage centers in India.

The Krishna temple was founded by the Vaishnavite saint Shri Madhvacharya in the 13th century. This temple has a fascinating idol of Lord Krishna that is richly adorned with jewels & a famous golden chariot. The unique feature of this temple is that the Lord is worshipped only through a window with nine holes called the Navagraha Kitiki. The daily sevas and administration of the Mutt are managed by the Ashta Mathas.

Saptotsava or the Seven Utsavas celebrated in mid of Jan are considered as the annual festival of Sri Krishna Temple. During the Paryaya festival, held every two years, the temple management is handed over to the next Matha. Krishnashtami, Raamanavami, Hanumajjayanthi, & Deepavali are other important festival here.

At a distance of 15 Kms from Udupi Railway Station, 65 Kms from Mangalore & 100 Kms from Murudeshwar, St. Mary's Island is a group of small beautiful islands to the north of Malpe Beach near Udupi. It is said that Vasco da Gama first reached this Island before reaching the Kappad Beach (near Calicut) while finding sea route to India.

The island has two beautiful beaches and crystallized basalt rock formations. The unique rock formations scattered through out the island giving a special landscape to the place. The rock formations are one of rarely found in the world. Eastern beach boasts of virgin sands, western beach is entirely made of sea shells. This unspoiled island is a very beautiful place with white sands, coconut trees, blue waters & pleasant atmosphere.

St. Mary's Island can be reached by 30 minutes boat ride from Malpe Beach which is about 10 Kms from Udupi. This .....

At a distance of 25 Kms from Udupi, 86 Kms from Mangalore & 70 Kms from Murudeswar, Anegudde Vinayaka Temple is located in Kumbhashi between Udupi & karwar (about 9 Kms from Kundapur). Anegudde means elephant (Aane) hillock (Gudde). It is one of the seven places of pilgrimage in the region called 'Parashurama Srishti' which are believed to be created by sage Parashurama.

According to Legend, Sage Agasthya arrived from Heaven to perform Yagna (religious offering) to please the Devas for rain. Kumbasura, an Asura troubled the sages and disrupted the yagna. At this time Lord Ganesha blessed Bheema of Pandavas, with a sword. Bheema fought Kumbasura and slays him.

The main sanctum sanctorum contains the majestic figure of Vinayaka with silver Armour, in standing posture. Tulabharam, a custom of offering to God valuables in weight equivalent of a person is frequently done in this temple by devotees. Ganesha Chauthi is the main festival .....

At a distance of 10 Kms from Udupi Railway Station, Malpe Beach spread between Swarna Nandi River and Malpe Port is one of the finest beaches in Karnataka.

Malpe is one of the most important ports of Karnataka. The endless stretch of golden sand, graciously swaying palm trees, the clear blue sky and the clean waters of Arabian Sea all set a perfect mood for an unforgettable holiday. Malpe Beach is characterized by silver white sand beach and rocky islands, which is still quite secluded and not visited by a lot of tourists. It is a great place for boating and swimming.

October to January is the best time to visit Malpe. St. Mary's Island can be reached from here.

The beach is a serene place with nature's beauty in abundance. The 100 feet high light house was built by the British and it's a photographer's paradise. Kaup beach is covered by palm groves all the sides. Kaup is also known for the temple of Goddess Mariamma. There is also an ancient fort located in Kaup which is seen in ruins now. Kaup was once a famous Jain Kshetra and home for several Jain temples.

At a distance of 10 Kms from Udupi Railway Station, Vadabhandeshwara Temple dedicated to Balarama, the brother of Sri Krishna is situated near Malpe Beach. This temple is believed to have been built by Madhvacharya who built the famous Udupi Sri Krishna Temple.

The sea shore near Vadabhandeshwara Temple is said to be the place where Madhavacharya had a vision of Lord Krishna is a sacred spot and a shrine for Lord Subramanya is built here. Evening is the best time to visit this temple, which allows you to also visit the near by beach and watch the beautiful sunset.

Mahalaya Amavasya is a special day here when thousands of pilgrims visit this temple and take bath in the sea. Malpe can be reached by bus from Udupi.

At a distance of 14 Kms from Udupi Railway Station, Bramhavar is an ancient religious destination located on NH17 towards Karwar. Brahmavar literally means 'a settlement of brahmins' is also an ancient cultural center.

Major points of attraction in Bramhavar include Mahalinga Temple built in 9th century, Gopinatha Temple which is a fine example of Hoysala architecture, and the Janardhana Shrine located in the agrahara.

At a distance of 19 Kms from Udupi Railway Station, Barkur was the ancient capital of the Tulu kingdom, known as Barakanur. The majestic Seeta River flows through Barkur and joins the Arabian Sea.

Barkur used to have 365 temples and ruins of few can be seen even today. The town was a flourishing port in the 15th and 16th centuries. The town's main attractions are the temples with typical tiled roofs. The Panchalingeshwara Temple situated at the southern end of the town is the famous among the temples here. Barkur was also a Jain settlement in the ancient days.

The ancient fort and mud palace at the entrance of the town are in a ruined state and can be visited.

At a distance of 37 Kms from Udupi & 50 Kms from Mangalore, Chaturmukha Basadi is a Jain temple, situated on a rocky hill near Karkala.

The primary deity of the temple is Chandranatha. This temple got its name due to the four doorways in four directions lead to the Garbhagriha. It is entirely built of stone and stands on a raised stone platform. The flat roof is constructed with large granite slabs and the temple has a total of 108 pillars. This temple was committed by Vir Pandya Deva, the King of Bairarava family in 1432 and completed in 1586.

This is the most celebrated temple in Karkala and is referred to in the inscriptions as Tribhuvana Tilaka Jina Chaityalaya and Ratnaraya Dhama. Photography is prohibited inside without prior permission.

At a distance of 37 Kms from Udupi & 50 Kms from Mangalore, Gomatheshwara Statue (Lord Bahubali) is located on a rocky hillock called Bahubali Betta in Karkala. It is situated near Chaturmukha Basadi (about 1 Km).

This single stone 42-foot statue of Gomateshwara is the second tallest in Karnataka, after Shravanabelagola.Veera Pandya Deva, the King of Bairarava family built this monolithic statue in his honor and also installed the Brahmadeva Pillar in front of the statue in 1436.

The Maha Masthakaabhisheka festival, sacred bathing of the statue with saffron paste, milk and water, held in every 12 years. During this period thousands of Jain devotees visit this place to carry out the Mahamastakabhisheka.

Most Asked Questions on Udupi