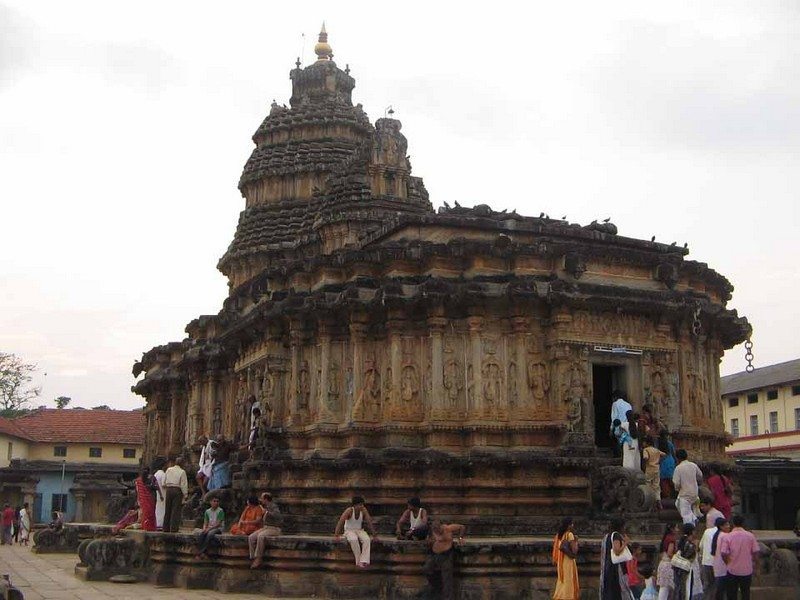 At a distance of 79 km from Udupi, 88 km from Chikmagalur, 99 km from Shimoga, 104 km from Mangalore, 256 km from Mysore, and 318 km from Bangalore, Sringeri is a renowned pilgrimage center located in the Chikmagalur district of Karnataka. It is one of the important pilgrimage centers in South India, and among the most famous places to visit near Mangalore.

Sringeri is well known for Sharada Peetham, among the must visit places as part of the Sringeri Tour Packages. Sringeri Sharada Peetham is the first and foremost of the 4 Peethams established by the renowned 8th-century saint Sri Adi Shankaracharya. Sringeri is situated at an altitude of 2789 ft on the banks of River Tunga bounded by the Western Ghats. The name Sringeri is derived from Rishyashringa-Giri, a nearby hill that is named after Sage Rishyashringa. Tipu Sultan provided financial aid to Sringeri for the reconstruction of temples.

According to the legend, once Adi Shankaracharya was wandering on the banks of the Tunga River at Sringeri, he saw a cobra spreading its hood to protect a pregnant frog from the hot sun. Struck by the kindness of the cobra towards its natural enemy, the Shankaracharya felt that Sringeri was truly unique then he built Sharada Peetham here. Sringeri Sharada Peetham maintains several Vedic schools and temples across India. Adi Guru Sankaracharya constructed four Peethams in four directions of India. They are Sringeri Mutt in South, Jyotir Mutt near Badrinath in North, Govardhana Mutt near Puri in East and Kalika Mutt in Dwaraka in West.

Sringeri is also famous for the wonderful Vidyashankara Temple built in the 14th century, one of the noteworthy sites to witness the Vijayanagar style of architecture. This temple is famous for its 12 pillars which are said to coincide with the zodiac signs. Besides, the Sringeri temple is built as per astronomical concepts. Chennakeshava Temple, Sharadamba Temple, and Sri Parswanath Jain Tirthankara Temple are the other prominent places to visit in Sringeri. Adi Shankara Temple, Kere Anjaneya temple, Malayala Brahma Temple, Mallikarjuna Temple, Torana Ganapati Temple, Kigga, Sirimane Falls, Agumbe, Kudremukh are other attractions here.

Sharada Navaratri is the major festival, which is celebrated with great zeal and show. During the festival, a large number of pilgrims visit Sringeri. Sringeri can be visited along with Chikmagalur Tour Packages.

The best time to visit Sringeri is from September to March while the peak season is from October to February. Usually, it takes a full day to visit places in Sringeri.

How to Reach Sringeri

How to Reach Sringeri - Full Details

Top 10 Places to Visit in Sringeri

At a distance of 1 km from Sringeri Bus Stand, Sri Sharada Peetham is a famous place of worship in Sringeri. It is one of the popular places to visit as part of Sringeri tour packages.

Sri Sharada Peetham in Sringeri is the first of the 4 Peethams established by the renowned 8th-century philosopher saint Sri Adi Shankara. This Peetham is dedicated to Goddess Sharadamba, the Goddess of learning and wisdom. It is one of the prime places to visit in Sringeri.

In the 14th century, Vidyaranya is said to have replaced the old sandalwood image of goddess with a stone and gold image. The temple structure itself continued to be made of wood till the early 20th century. After an unexpected fire that damaged the structure, the current structure was built in the traditional south Indian style of temple architecture.

Every year during Navarathri a .....

At a distance of 1 km from Sringeri Bus Stand, Sri Vidyashankara Temple is a Hindu temple situated inside the Sharada Peetham Complex in Sringeri. It is one of thefamous temples to visit as part of Sringeri tour packages.

Sri Vidyashankara Temple was built in the memory of Guru Vidyashankara with the aid of the Vijayanagar rulers in the 14th century. The temple houses ruby images of Venugopala and Srinivasa and a Nandi made out of a large pearl. Several inscriptions in the temple describe contributions made by the Vijayanagar rulers. It is one of the best pilgrimage places to visit in Sringeri.

The Vidyashankara temple is a unique monument built combining Hoysala and Dravidian architectural styles. Built with golden-colored stone, the temple sits on a low platform in the middle of the large paved area. The mandapam is remarkable for its 12 zodiac .....

At a distance of 5 km from Kigga, and 15 km from Sringeri, and, Sirimane Falls is a stunning waterfall situated near Kigga in Karnataka. Also known as Kigga Falls, it is one of the popular waterfalls in Karnataka, and among the prominent tourist places in Sringeri.

With a height of about 40 feet, this waterfall is located in serene surroundings with dense forest all around. There is a motorable road available to reach the falls and vehicles can be hired from Kigga. A little walk is required from the parking place to reach the falls through well-laid steps.

It is possible to get right to the bottom of the falls and enjoy the force (however, this may not be possible when the water force is heavy during monsoons). The falls are wide and can accommodate more crowds at the bottom. This is a good place to visit throughout the year. This is a very safe .....

At a distance of 26 km from Sringeri, 31 km from Thirthahalli, 55 km from Udupi, 62 km from Kundapura, 77 km from Kudremukh, 94 km from Shimoga, 112 km from Mangalore, 342 km from Bangalore, Agumbe is a small hill town located in the Shimoga district of Karnataka, India. Nestled in the thickly forested Malnadu region of the Western Ghats, it is one of the most mesmerizing offbeat hill stations in Karnataka, and among the most famous places to visit near Mangalore.

Situated at an altitude of over 2100 feet, the scenic village of Agumbe lies in the Western Ghats belt with some of the last remaining lowland rainforests. The place is nicknamed 'The Cherrapunji of the South' as it receives the heaviest rainfall in the southern part which makes it a perfect home to some of the scenic waterfalls, dense forests, and rivers. It is also called Hasiru Honnu means green gold as it is home to .....

At a distance of 1 Km from Sringeri Bus Stand, Sri Mallikarjuna Temple (also called as Mahanikareshwara Temple) is situated on top of the Mallappa Hill.

The large black-stone Shiva Linga worshipped in this temple is believed to be swayambhu (self manifested). The Linga stands over the site of sage Vibhandaka's disappearance from the mortal world and called Malahanikareswara. Bhavani Devi temple located in the same compound is believed to be built by Sri Sachidananda Swamiji. Sri Abhinava Nrisimha Bharati (1600-1623) drew a figure of Lord Ganesha with a piece of turmeric on a pillar. This image is called Kambada Ganapati.

The temple can be reached through 150 well laid steps. Early mornings or late evenings are ideal to be at the top. The Rathotsava festival celebrated on the next day of Mahashivaratri is very famous. On Kartika Poornima day Deepothsavam is celebrated in a grand scale.

At a distance of 1 Km from Sringeri Bus Stand, Janardana Temple is located to the left of Vidya Shankara Temple within the Sharada Peetham Complex.

Sri Jnanaghanacharya established this temple in 14th century during Vijayanagara period. Though the temple is small, the structure is attractive. Beautiful idols of Garuda and Anjaneya are seen on both sides of the temple. This shrine also houses an ancient Sudarshana Chakra.

At a distance of 10 Kms from Sringeri, Kigga is a beautiful village situated on the banks of Nandini River, a tributary of Tunga. Kigga is famous for Rishya Shringeshwara temple.

Dedicated to Rishyasringa, the temple stands on the site where Rishyasringa was absorbed in the celestial light. Built during Vijayanagara period, the temple houses a linga of a unique shape, with three protuberances resembling horns. There is a belief that if the linga is properly worshipped, famine will be averted in the land to a distance of 12 yojanas all round. It is said that Sage Rishyasringa's advent removed the drought in this place. The Rathotsavam of the temple is conducted in Chaitra Masa (Mar/April).

Kigga is connected by bus & cabs with Sringeri.

At a distance of 29 km from Kudremukh, 42 km from Sringeri, and 70 km from Chikmagalur, Horanadu Annapoorneswari Temple is a famous temple situated in the thick forests of the Western Ghats in the Chikmagalur district of Karnataka. It is one of the popular temples in Karnataka, and among the must include places in Sringeri tour packages.

Sri Annapoorneswari Temple is situated on the banks of River Bhadra and is also known as Sri Kshethra Horanadu. It is believed that this temple was established by Agasthya Maharishi. This temple is dedicated to Goddess Annapoorneswari, one of the incarnations of Goddess Durga. A new idol of the main deity was installed at the temple in 1973. It can also be visited along with Chikmagalur Tour Packages.

The temple is now known as Adi Shaktyatmaka Sri Annapoorneswari Temple. The recently .....

At a distance of 20 Kms from Sringeri, Hariharapura is a small village on the banks of River Thunga. It is famous for Sri Sharada Lakshmi Narasimha Peetam & Temple established by Adi Shankaracharya.

The temple here is dedicated to Lord Narasimha and it's believed to be over 1000 years old. There is also a shrine for Sri Sharadamba installed by Adi Shankaracharya. According to 14th Century inscriptions, this place was ruled by Vijayanagara King Harihara Maharaya, who had recognized this mutt and had also conferred titles to the then Swamiji and gifted lands to the mutt.

It is believed that Daksha performed yagna here. There is an ancient temple dedicated to Swayambhu Dakshahara Someshwara at Hariharapura.

Hariharapura is close to the main road towards Koppa and is connected by bus.

At a distance of 26 Kms from Sringeri & 15 Kms from Kudremukh, Hanuman Gundi Falls (also known as Sutanabbe Falls) is a wonderful waterfall situated close to the main road between Sringeri & Kudremukh. Falling from a height of 100 feet, this is a majestic waterfall located in serene location.

There are about 300 well laid steps to reach the falls after little walk from the main road. It is a very safe place to take bath and it's possible to go directly under the falls. Post-monsoon is the best season to visit this falls. The falls is maintained by Forest Dept. and an entry fee is charged at the gate.

This place is relatively less crowded.