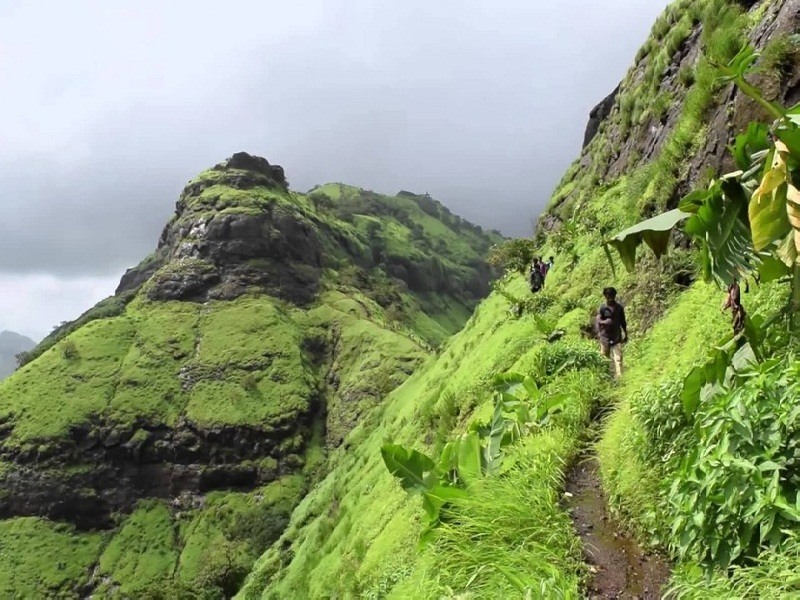 At a distance of 3.5 km from Neral Railway Station,13 km from Matheran, 88 km from Mumbai & 117 km from Pune, Peb Fort, also known as Vikatgad, is an ancient fort situated near Neral. This is one of the popular places of trekking near Mumbai, and among the must-visit places as part of Matheran Tour Packages.

Situated at an altitude of 2100 feet, the fort derives its name from the Goddess Pebi at the base of the fort. The fort is also named Vikatgad for its supposed shape of the Elephant Headed God, Ganesh. Historical references clearly indicate that Shivaji Maharaj used the caves on the fort to store the grains. It is one of the popular places to visit in Matheran.

The fort is famous for its caves which are maintained by disciples of Swami Samartha and the meditation chambers carved out from the rock inside the mountain. To get inside the meditation chamber, one has to crawl through a narrow passage and then climb down into the meditation chamber. The chamber is very well maintained with tiles on the floor for people to sit and meditate. The fort also has a temple dedicated to Swami Samartha on the top and has the footwear or Padukas worn by the great saint kept on the top. The view of the entire Neral and Karjat region from the top is worth the climb. Another attraction of the trek is the only standing Bastion or Buruj facing the Panorama point of Matheran, the view from here is breathtaking.

The Vikatgad fort is situated next to Matheran Mountain. The Peb fort trek starts from Neral (3.5 km) and it takes about 2 hours to reach the fort. The path passes through water streams, rocks, grassy meadows, forests, and a ladder at the end. The trek level is moderate to difficult. Visitors can climb down the Peb fort via Matheran route. This path is also quite popular and easy. The downhill trek takes 1 hour to reach the Matheran railway track. From here one has to walk 45 minutes to reach the Matheran main road along the track.