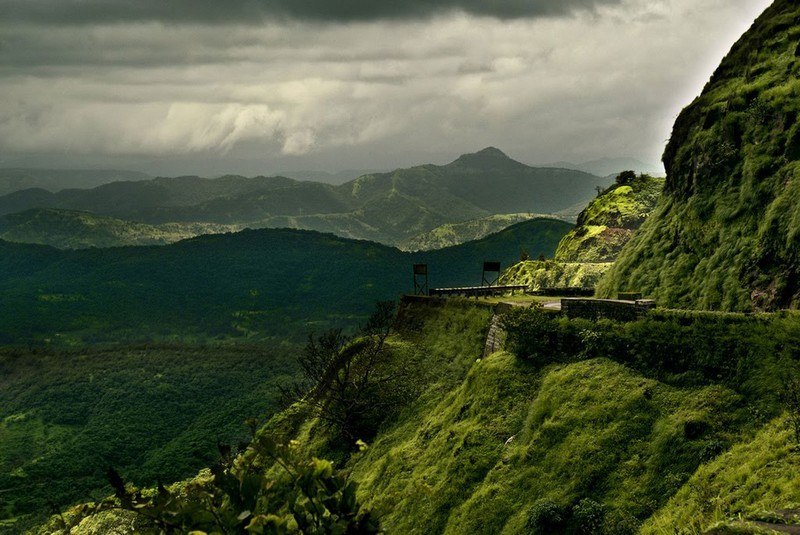 At a distance of 67 km from Pune, 95 km from Mumbai, and 282 km from Aurangabad, Lonavala is a beautiful hill station in the Pune district of Maharashtra. It lies at an altitude of 622 m in the Sahyadri Ranges which separates the Deccan Plateau and the Konkan Coast. Lonavala is one of the top hill stations in Maharashtra, and also among the famous places to visit in Maharashtra.

The twin hill stations of Lonavala and Khandala are the popular tourist places to visit near Pune & Mumbai. The hill station is spread over an area of 38 square km. The name of the city is derived from the Sanskrit word 'Lonavali', which refers to a group of caves. The name was given to the place due to the presence of many caves in and around the city. Lohagad Fort, Karla Caves and Rajmachi Point are some of the best places to include in Lonavala tour packages.

Lord Elphinstone, who was the Governor of the Bombay Presidency, developed Lonavala along with Khandala in 1871. Present-day Lonavala was a part of the Yadava Dynasty, which was taken over by the Mughals and then Marathas ruled before it eventually fell into the hands of the British. The forts in the region and the Malva warriors played an important role in the history of the Maratha and Peshwa empires.

Pune International Airport is the nearest airport, which is about 69 km from Lonavala and has daily flights from Mumbai, Bangalore, Hyderabad, Chennai, Kochi, Delhi, Kolkata, and Goa. Lonavala has its own railway stations and is well connected by train with Goa, Delhi, Mumbai, Pune, Kochi, Bangalore, Ahmedabad, Hyderabad, and many other major cities in India. Lonavala is well connected by bus with Mumbai, Pune, Satara, Goa, Shirdi, Ahmedabad, Bangalore, Jodhpur, Rajkot, and Mangalore.

The best time to visit Lonavala and Khandala is during the monsoon, between July - September when the scenic spots become lush green and the waterfalls are in full flow.

How to Reach Lonavala - Full Details

Top 10 Places to Visit in Lonavala

At a distance of 11 km from Lonavala, 59 km from Pune & 107 km from Mumbai, the Karla Caves or Karle Caves are a complex of ancient Indian Buddhist rock-cut cave temples located at Karli near Lonavala, Maharashtra. It is one of the best Lonavala tourist places and also among well known historical places to visit near Mumbai & Pune protected by Archaeological Survey of India.

Karla is one of the most famous centers of early rock-cut architecture in India. The caves are excavated nearly 100 m on a high spur of the chain of hills on the north flank of the Indrayani valley. These caves were developed over two periods - from 2nd century BC to 2nd Century AD and in 5th - 10th Century AD. The oldest of the cave shrines is believed to date back to 160 BC, having arisen near a major ancient trade route, running eastward from the Arabian Sea into the Deccan. These caves .....

At a distance of 11 km from Lonavala, 66 km from Pune & 114 km from Mumbai, the Lohagad Fort (Iron Fort) is a historical fort situated along the Sahyadri hills in the Lonavala region of Maharashtra. It is one of the best tourist places to visit in Lonavala and also one of the popular heritage in Maharashtra.

Perched atop a hillock at an altitude of 1050 m, the Lohagad Fort separates the Indrayani basin from the Pawna basin. It is also among the popular trekking places to visit near Pune & Mumbai. It is one of the most visited forts in Maharashtra as part of Lonavala tour packages. The fort was built by Guru Govind Singh in 1564 CE to serve as a prison. Shivaji Maharaj captured it in 1648 CE, but he was forced to surrender it to the Mughals in 1665 CE by .....

At a distance of 12 km from Lonavala Railway Station, Lion's Point is a vantage point located midway between Bhushi Dam and Aamby Valley in Lonavala. It is one of the popular viewpoints in Lonavala and also among the must include places in Lonavala tour packages.

The view from Lions Point is majestic and panoramic. One would see dozens of small waterfalls, lush green hills, and lakes around during monsoon season. It is one of the famous places to visit in Lonavala. The sunrise and sunset views from here are mesmerizing. The wind is extremely strong at this place and it was quite thrilling to see many adventurous people get close to the edge to get 'that' living-on-the-edge photograph. The drive to the point is also equally scenic

The Shiv-ling peak is a conical peak that can be seen towards the left side of Lion's Point.

Rajmachi Point is located within walking distance from the Dukes Retreat. This spot got its name because Rajmachi Fort of the incredible Maratha ruler Chatrapati Sivaji is situated opposite this point. The point offers spectacular views of Rajmachi Fort, the surrounding valley, and waterfalls as part of Lonavala packages. Rajmachi Point has a temple and a children's park. This is also a famous area for movie producers.

Monkey Point, Sunset Point, Lions Point are the few attractions close by. Sunset point gives spectacular views of the sunset. One can have a clear view of the .....

At a distance of 5 km from Lohagad Fort, 15 km from Lonavala, 71 km from Pune & 119 km from Mumbai, Bhaja Caves are one of the popular Buddhist caves of Hinayana faith in Maharashtra. These caves are one of the top places to visit in Lonavala and among the well known tourist places to visit near Pune & Mumbai. These caves are well known historical places near Pune protected as National Monument by the Archaeological Survey of India.

Bhaja Caves or Bhaje caves are a group of 22 rock-cut caves dating back to the 2nd century BC. The caves are 400 feet above the village of Bhaja on an ancient trade route, which extends from the eastern side of the Arabian Sea towards the Deccan.

The Bhaja Caves are similar to the Karla Caves in style and architectural designs. The most prominent among the excavations is .....

At a distance of 12 km from Lonavala Railway Station and 12 km from Tung Fort, Tiger's Leap or Tiger's Point is a scenic viewpoint situated at Kurvande on the route towards Aamby Valley from Lonavala. It is one of the must see tourist places in Lonavala.

Tiger's Leap, also known as Waghdari, is a cliff-top with a sheer drop of over 650 m, offering a wide view of the hills. The point derives its name from its resemblance to the shape of a leaping tiger. It offers spectacular views of forests, lush greenery, waterfalls and lakes around. The sunrise and sunset views from here are mesmerizing.

There is a small waterfall near to this viewpoint, which flows during the monsoon months only. It serves the purpose of relaxing in the water better than Bushy dam, as the force of the fall is higher. Also, after the brief steep descent, the fall becomes a stream with a fair amount of force to go all the way down to the base of the Tiger's Leap. The site is frequented by various tourists .....

At a distance of 15 km from Lonavala Railway Station and 10 km from Lohagad Fort, Pawna Lake is an artificial lake formed by water of Pawna dam. Situated towards the outskirts of Lonavala, this lake is one of the top Lonavala tourist places.

Nestled amidst the scenic locales of Kamshet, this lake came into existence after the construction of the Pawna Dam, and now it plays a scenic host for camping, picnics and sightseeing. Pawna Lake is fast gaining popularity among the locals who are looking for a quiet weekend getaway with friends and family.

The lake is surrounded by rich greenery, making it one of the best places to visit in Lonavala. Facilities for row and motor boating are available at this place, which add to its popularity. While enjoying a boat ride on the lake, tourists get magnificent views of three ancient forts- Tikona, Lohagad and Tung.

Currently boating is stopped in the lake.

Kune Falls lies at an altitude of 622 m set against the stunning backdrop of the famous Sahyadri Mountains. It is a three-tiered waterfall cascading down from a height of 200 m and is a must include tourist place in Lonavala tour packages. The waterfall is divided into 2 sections and the highest drop at this three-tier waterfall is of about 100 m. The place is completely surrounded by lush green vegetation and provides a great visual experience.

At a distance of 15 km from Lonavala, 15 km from Khandala, 82 km from Mumbai & 82 km from Pune, Rajmachi Fort is an ancient fort situated in Pune district of Maharashtra. It is one of the popular tourist places near Mumbai for trekking and also among the best places to visit in Lonavala. This famous fort in Maharashtra lies at an altitude of 2710 feet. This is a protected monument and is among the most popular attraction not to miss in a Lonavala tour packages.

Historically, Rajmachi fort was a strategic fort to control Bor Ghat (between Khopoli and Khandala on Mumbai-Pune route) which was a historical trade route. It is one of the ideal one day trip near Mumbai. The fort complex was originally constructed by the Satavahanas. In 1657 CE, Shivaji Maharaj .....

At a distance of 13 km from Panvel, 53 km from Matheran, 56 km from Lonavala, 66 km from Mumbai Central and 112 km from Pune, The Karnala Bird Sanctuary is situated in the Panvel Taluk of Raigad district in Maharashtra. It is one of the picnic spots near Mumbai city.

Karnala was declared a bird sanctuary in 1968 as the first one of its kind in Maharashtra. During its initial phase, the sanctuary covered an area of 4.45 sq. km and in 2003 this was increased so that it now spreads across 12.11 sq. km. This bird sanctuary is situated below the Karnala Fort. The bird sanctuary is a popular destination for bird-watchers and hikers in the Mumbai area.

The Karnala Bird Sanctuary is home to over 150 species of resident and 37 species of migratory birds. In the monsoon season, travellers can spot a vivid collection of bird species such as the .....