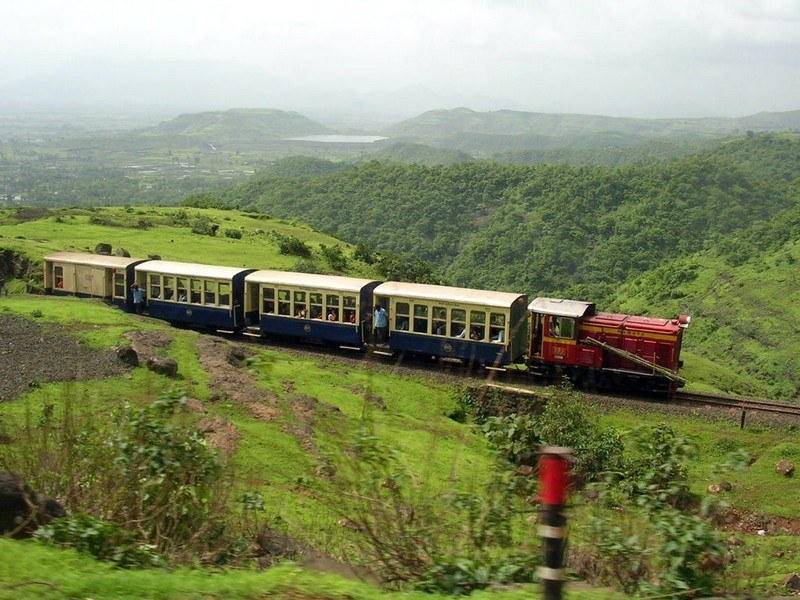 At a distance of 94 km from Mumbai, 56 km from Lonavala, and 122 km from Pune, Matheran is a small hill station in the Raigad district of Maharashtra. It is one of the top monsoon destinations in Maharashtra, and among the popular places to visit near Mumbai & Pune for a weekend trip.

Situated at an altitude of 800 m in the Western Ghats range, Matheran is one of the smallest hill hill stations in Maharashtra. Matheran was developed by Hugh Poyntz Malet, the then district collector of Thane district in 1850 AD. The place was developed by Lord Elphinstone, the Governor of Bombay, as a summer resort for the British. Matheran is the birthplace of famous freedom fighter Veer Bhai Kotwal. The Matheran Hill Railway was built in 1907 AD by Sir Adamjee Peerbhoy and covers a distance of 20 km, over large swathes of forest territory. A ride on the Matheran hill railway, also known as Matheran Light Railway (MLR), is one of the must-experience things to do in Matheran tour packages.

Matheran, which means 'forest on the forehead', is an eco-sensitive region declared by the Ministry of Environment and Forest, Government of India. It is Asia's only automobile free hill station. No private automobiles are allowed into Matheran town. Tourists to Matheran have to drive up to Dasturi Point (2.5 km) and reach Matheran by foot or pony. It can also be visited along with Lonavala packages.

Matheran is famous for its 38 viewpoints, which provide a panoramic view of the peaks of Western Ghats. Porcupine Point, Panorama Point, Echo Point, Charlott Lake, King George Point, Louisa Point, Monkey Point, Paymaster Park, Panthers' Caves, Rambaug Point, Heart Point, etc. are some important places to visit in Matheran. Matheran also offers activities such as trekking, hiking, climbing, etc. The ride on the toy train which connects Neral to Matheran used to be quite famous but the service has now been discontinued temporarily.

Chatrapati Shivaji International Airport, Mumbai is the nearest airport, which is around 90 km from Matheran. Mumbai is well connected to other major airports in India and abroad. Neral Railway Station is the nearest railhead, which is about 11 km from Matheran. It has trains from Mumbai, Karjat, Pune, and Kolhapur. Mumbai & Pune are the major railheads near Matheran. Neral is the nearest town and is well connected by buses with Mumbai and Pune. Tourists to Matheran can also drive up to Dasturi Point (8 km away from Neral) and reach Matheran by foot or on a pony.

The best time to visit Matheran is during the months of July to October, while the peak season is from August to September.

How to Reach Matheran - Full Details

Top 10 Places to Visit in Matheran

At a distance of 2.5 km from Matheran Railway Station, Louisa Point is a spectacular vantage point situated in Matheran. It is one of the top Matheran tourist places.

Louisa Point is one of the prime attractions in Matheran Tour which provides beautiful views of the surrounding area. The point offers the views of historical forts Vishalgad and Prabalgad. This is a great spot for eye-catching views of the sunset, surrounding mountains, and lush greenery. During and just after monsoons many unnamed waterfalls can also be spotted on the facade of the hills nearby.

Valley crossing is also organized here during the season which connects Louisa Point to the nearby Honeymoon Point. Along with this point, the famous Lion's Head Point is also located close by which receives its title as it resembles a lion's head. Wonderful views of a waterfall, Lake .....

At a distance of 2 km from Matheran Railway Station, Charlotte Lake, also known as Sharlott Lake is one of the popular Matheran tourist places situated near Echo Point. It is the prime source of drinking water in the Matheran region.

This 50 feet deep lake was built in 1956 AD. Water from this lake gets filtered and is supplied to the entire town of Matheran. This popular tourist destination is splendid during Monsoon and mostly gets dried up in summer. An ancient Pisarnath Mahadev Temple is located on the left bank of the lake. The two beautiful viewpoints, Louisa point and Echo point are located close to this lake. Bird watching is also a popular activity at the lake, especially during early morning and evening.

This spot offers the ideal view of sunset and also gives the majestic view of distant Prabalgad fort. Additional attraction of the Porcupine Point is the famous Cathedral Rocks positioned to the west of the Sunset Point. The location is blessed with scenic surroundings and dense forests. The calm and cool atmosphere mesmerizes the travelers.

This place is mostly visited in the evening hours to watch the sunset. The place can be accessed by walk or horse, but walking is the preferred mode of reaching this place. It can also be accessed from Dhodani village and this trail offers wonderful views. The duration of the trek is about one hour (one way) from Matheran.

At a distance of 5 km from Matheran Railway Station, Panorama point, also known as Sunrise Point, is one of the well known and highly admired vantage points near Matheran. It is a popular place to watch the sunrise.

The point offers picturesque views of the Western Ghats and lush plains dotted with villages far below. It is one of the popular places of sightseeing in Matheran. It offers beautiful views of Prabalgad fort and distant views of Heart Point, Porcupine Point and Monkey Point.

Panorama Point is one of the highest points in Matheran and is mostly visited in the early hours to see the spectacular sunrise. It can be reached by walk or pony, but trekking to this place is a wonderful experience. It takes 2 hours to reach the Panorama Point from Matheran market.

At a distance of 2.5 km from Matheran Railway Station, Echo Point is one of the famous points of interest in Matheran hill station and it offers wonderful view of the surroundings. As the name suggests, Echo Point is the place where one can hear the echoes from the mountains.

Out of the 38 viewpoints that bless the hills of Matheran, Echo point is one of the most magnificent points. This place is known for its cleanliness and incredibly pleasant weather. The place is frequented during the monsoon months when the place is dotted with magnificent waterfalls. Echo point is a delight for food lovers as it offers a decent range of food stalls.

Echo Point can be reached by walk or Pony from Matheran market area. It takes 30 minutes to reach the point by walk.

At a distance of 2 km from Matheran Railway Station, Alexander Point is one of the best places to visit in Matheran. This site is located in Madhavji road on the backdrop of green forests.

Alexander point offers gorgeous views of Palasdari Lake, Rambaug Point, Garbut Point, Chowk Point, downhill village of Borgaon and the winding Ulhas River. It is also a paradise for nature lovers due to its nature and beauty. One can ideally sit here for hours and feel the Mother Nature. The beautiful view of the towers of Bhivpuri Power house is amazing from this cliff. The recently started 1300 feet long zip line from Alexander point to Rambaug point has made already popular Alexander point even more popular.

It will take 20 to 30 minutes to reach the point by walk from the Matheran station. This awesome viewpoint is usually visited early morning for best views.

At a distance of 3.5 km from Matheran Railway Station, One Tree Hill Point is a popular site among tourists in Matehran, which is a distinct point with a single Jambhul tree situated at the top. The point gets its name after this incredible phenomenon of holding a solitary tree on its crest for decades. As per historians, the path was discovered by a British collector of Thane district, Hugh Poyntz Malet. Trekking to this point is one of the top things to do in Matheran hill station.

One Tree Hill is also the culmination of a trekking route that starts in Ambewadi near Karjat to Matheran. On the way to One Tree Hill, trekkers will also pass through Shivaji Ladder. From the top of the One Tree Hill Point one can also get eye catching vistas of the adjacent Tent Hill and the Chowk village. Hiking through Shivaji Ladder and climbing down from the hill to valley is an exciting experience. This site is perfect for people who want to relax .....

At a distance of 4 km from Matheran Railway Station, Little Chowk Point is located towards the southernmost tip of Matheran Hill Station. The point gets its name from the Chowk town below which can be viewed from this point.

Little Chowk Point is one of the popular tourist locations in Matheran and is highly appreciated for the outstanding views it offers. The small yet popular spot offers impressive views of the Sahyadri Ranges, Karnala Fort and the beautiful town of Panvel. Besides, one can see the magnificent Vishalgad and Prabalgad Fort with its verdant surroundings from this viewpoint. The statue of Lord Ganesh is another attraction at this point.

Little Chowk Point is located further 1 km from Rambaug Point and it can be reached by walk or Pony. It will take 1 Hour to reach the point by walk from the Matheran station. Visitors can also hire a pony and do Alexander Point, Rambaug Point, One Tree hill Point and Little .....

At a distance of 17 km from Matheran and 8 km from Diksal, Garbett Point or Garbut Point is located near Matheran with grand view of the plateau below. The huge plateau gives a view to various waterfalls on the neighboring mountains. This place is also one of the top things to do in Matheran hill station and it is one of the must include places in Lonavala packages..

Garbut Point, situated about 5 km walk from Matheran Railway Station, is a comparatively secluded and less visited vantage point. Flanked by a gorgeous valley on one side and the thick jungle on the other, Garbett Point is a place from where enthralling views of sunrise and sunset can be observed.

Garbett to Matheran trekking is very famous for adventure lovers from Mumbai and Pune. The trek is a bit long and requires a little patience to accomplish. The trek .....

At a distance of 3.5 km from Neral Railway Station,13 km from Matheran, 88 km from Mumbai & 117 km from Pune, Peb Fort, also known as Vikatgad, is an ancient fort situated near Neral. This is one of the popular places of trekking near Mumbai, and among the must-visit places as part of Matheran Tour Packages.

Situated at an altitude of 2100 feet, the fort derives its name from the Goddess Pebi at the base of the fort. The fort is also named Vikatgad for its supposed shape of the Elephant Headed God, Ganesh. Historical references clearly indicate that Shivaji Maharaj used the caves on the fort to store the grains. It is one of the popular places to visit in Matheran.

The fort is famous for its caves which are maintained by disciples of Swami Samartha and the meditation chambers .....