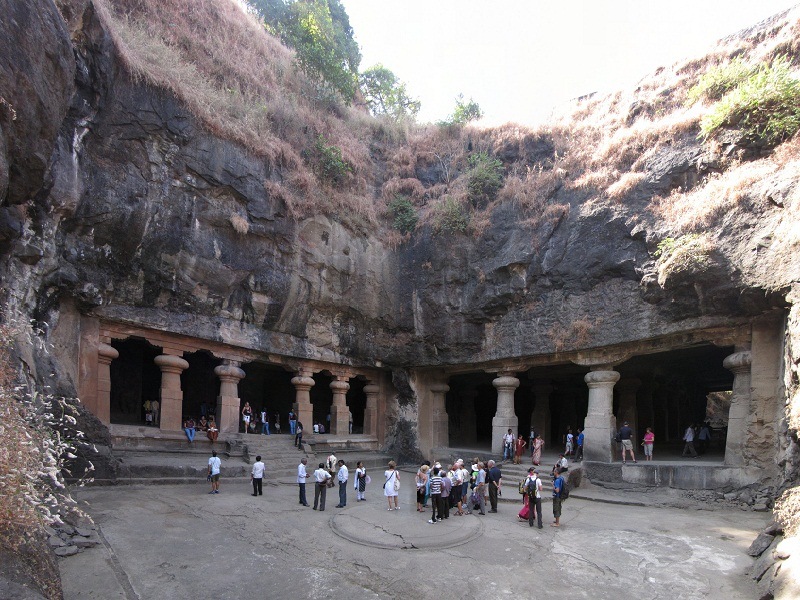 Visited From: Gateway of India (13 km)

At a distance of 17 km from Mumbai Chhatrapati Shivaji Terminus, Elephanta Caves are a network of sculpted caves located on Elephanta Island or Gharapuri in Mumbai Harbour. The Caves, listed as UNESCO World Heritage Site, is Mumbai's oldest historic site and also one of the best Mumbai tourist places.

Among the prime places to visit as part of Mumbai Packages, the identity of the creators of Elephant Caves is disputed. It is believed that the Chalukyas and Rashtrakutas were behind the creation of the caves and sculptures. The island was ruled by the Chalukyas and later by the Gujarat sultanate. It was later handed over by the Gujarat Sultan to the Portuguese in 1534 AD.

The caves are known for beautiful Hindu temples and sculptures. The Elephanta Caves were named by the Portuguese after they saw a statue of an elephant on the island. The statue is now placed at the Bhau Daji Lad Museum at the Jijamata Udyan at Byculla in Mumbai. The main cave (Cave 1) was a Hindu place of worship until Portuguese rule began in 1534 AD, after which the caves suffered severe damage. This cave was renovated in the 1970s after years of neglect and was designated UNESCO World Heritage Site in 1987 to preserve the artwork. It is currently maintained by the Archaeological Survey of India (ASI).

Elephanta Island has two groups of caves in the rock-cut architectural style. The caves are carved out of single solid basalt rock and are dated between the 5th and 8th centuries. Five caves situated on the western hills of the Island are devoted to the Hindu sect Shaiva and various Hindu sculptures are chiseled in these caves. Famous sculptures of Hindu caves are Ravana holding up the Kailash, Shiva-Parvati on Kailash, Ardhanarishvara, Trimurti, Wedding of Shiva, Linga, Nataraja, Kartikeya, Yogishvara, and Matrikas. In the second group of caves, various Buddhist sculptures can be spotted depicting numerous pictures of Gautama Buddha and Jataka Tales.

Another attraction of the island is Cannon Hill. Located at the top of the island, it was used to safeguard the Bombay harbor during colonial times. Although many caves have been ruined and damaged, Elephanta Caves still present a rich heritage of ancient history to the tourists. The Caves are also the site of the annual Elephanta Festival conducted by the Maharashtra Tourism Department held every year in February. The festival showcases classical performances and aims at promoting Indian classical dance and heritage.

The island can be reached by about a 50-minute boat ride from Gateway of India.

Cave Timings: 7 AM to 7 PM, Closed on Monday

Ferry Timings: 9 AM to 5 PM. The first ferry departs from Mumbai (Gateway of India) at 9 AM, and the last one to Caves departs at 2 PM. The last ferry to return from the Caves is at 5 PM.