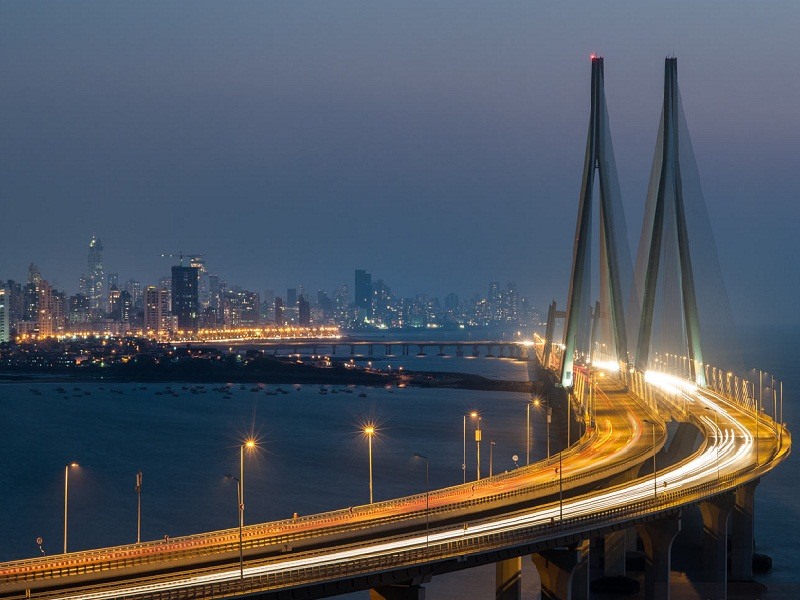 At a distance of 18 km from Mumbai Chhatrapati Shivaji Terminus, the Bandra-Worli Sea Link, officially called Rajiv Gandhi Sea Link, is a cable bridge linking Bandra in the Western Suburbs of Mumbai with Worli in South Mumbai. This is one of the famous picnic spots in Mumbai.

Bandra - Worli Sea Link is an eight-lane bridge which has pre-stressed concrete-steel viaducts on either side. The bridge is a part of the proposed Western Freeway that links the Western Suburbs to Nariman Point in Mumbai's main business district. The 16 billion bridge was commissioned by the Maharashtra State Road Development Corporation and built by the Hindustan Construction Company. The first four of the eight lanes of the bridge were opened to the public on 30th June 2009. All eight lanes were opened on 24th March 2010.

The sea-link reduces travel time between Bandra and Worli during peak hours. Whole journey of 8 km, which earlier used to take 45 to 60 minutes, can now be completed in just 7 to 10 minutes. The bridge had an average daily traffic of around 37,500 vehicles. The sunrise & sunset views attract many photo enthusiasts. Visitors cannot walk on this seal link. Stopping on the Worli sea link for photography is banned by Government of Maharashtra.

Worli Sea Face is the place where visitor can get the glimpse of this famous Sea Link. It features a number of significant attractions that include the Worli Fort and Haji Ali Dargah. Besides, there are a number of high-end restaurants and shopping outlets present. Famous for experiencing giant waves during monsoon season, it attracts locals and tourists alike throughout the year.

Tourists can reach the Sea Link from either of the two sides of the link. Nearest bus depot is Bandra (2 km) and the nearest train station to the link is Bandra Railway station (5 km). Taxis and auto rickshaws are among other available modes of transport.