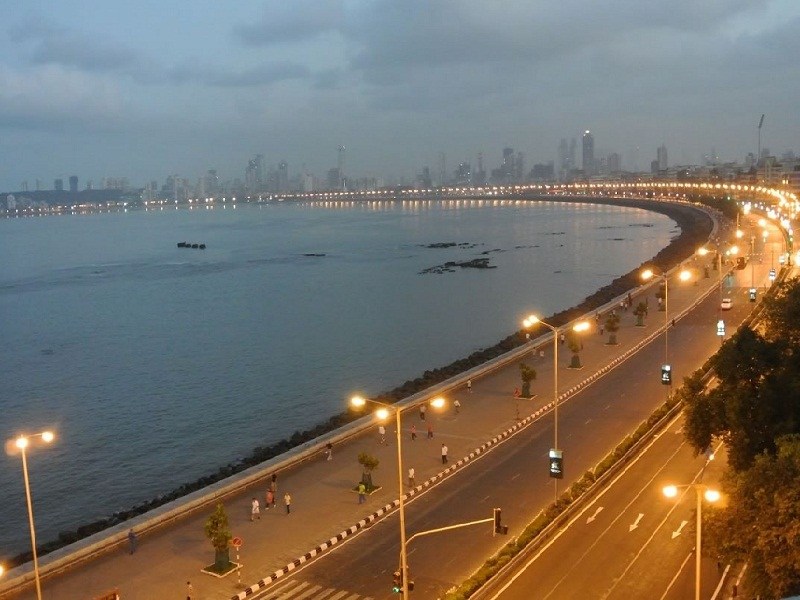 At a distance of 5 km from Mumbai Chhatrapati Shivaji Terminus, Marine Drive is a 3 km long beautiful road in southern Mumbai of Maharashtra. This is one of the most visited places in Mumbai city and also one of the top tourist places in Mumbai.

It is a C-shaped six-lane road along the coastline of Arabian Sea, forming a natural bay. This road links Nariman Point to Babulnath, and is situated at the foot of Malabar Hill. Officially, it is named as Netaji Subhash Chandra Bose Road. Marine Drive is also referred to as 'Queen's necklace', because the street lights make the road look like a string of pearls and create an illusion of a necklace, when viewed at night from any elevated point along the pathway of the drive.

Promenade is the main attraction of Marine Drive. The view of the sunset over the Arabian Sea from Marine drive is magnificent. The palm trees along the promenade make it more attractive. To the north of the Marine Drive is the Chowpatty Beach, which is famous among Mumbaikars and travellers for local fast food. Marine Drive is considered as the largest viewing gallery of the world. Several events like Bombay Marathon, IAF Airshow, French Festival, International Fleet Review and many others have been hosted along its walkway over the years.

The real estate value of the Marine Drive is one of the highest in India and ranks fourth when compared to the world statistics. Numerous celebrities have their houses built here and this area has become one of the premier residential communities. Walkeshwar, the resident of the governor of Maharashtra is also located on Marine Drive. The 5 star hotel Oberoi and many other noted restaurants lined along this walkway.

The nearest local station to the Marine Drive is the Churchgate Station. Tourists can either walk to the road from the station or take up taxis, auto rickshaws, buses or even a tanga.