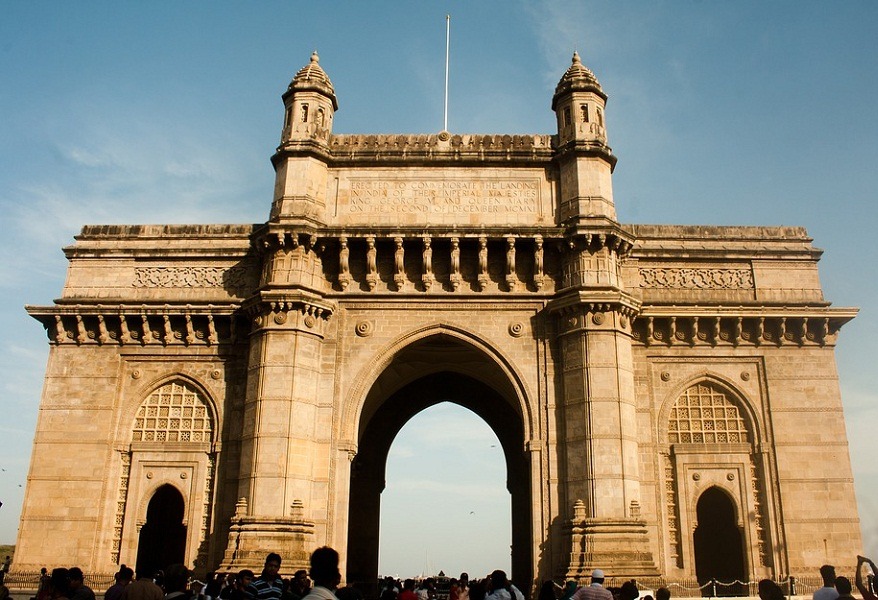 At a distance of 4 km from Mumbai Chhatrapati Shivaji Terminus, Gateway of India is a national heritage monument located at the waterfront in Apollo Bunder area in South Mumbai, facing Arabian Sea. It is considered to be the most famous monument in Mumbai and also one of the main tourist places visited as part of Mumbai Darshan.

The Gateway of India was erected to commemorate the landing of King George V and Queen Mary at Apollo Bunder, when they visited India in 1911. Built in Indo-Saracenic style, the foundation stone for the Gateway of India was laid on 31st March 1911. The final design of George Wittet was sanctioned in 1914 and the construction of the monument was completed in 1924. The Gateway was later the ceremonial entrance to India for Viceroys and the new Governors of Bombay.

The architecture of the Gateway is a combination of Hindu and Muslim architectural styles; the arch is of Muslim style while the decorations are of Hindu style. The gateway is built from yellow basalt and reinforced concrete. The central dome in the gateway has a diameter of 15 m and the arch way is 26 m high. To the front of the gateway is a statue of Chhatrapati Shivaji.

It lies at the end of Chhatrapati Shivaji Marg at the water's edge in Mumbai Harbour. From this gateway, people can take a ferry boat to Elephanta Caves, or luxury boats that take visitors around the harbour. In earlier times, it would have been the first structure that visitors arriving by boat in Mumbai would have seen. The Gateway has also been referred to as the Taj Mahal of Mumbai and is the city's top tourist attraction. The India Gate in New Delhi boasts similar architecture of Mumbai's Gateway of India.

There are five boat jetties near the gateway. The first jetty is exclusive to the Atomic Research Centre, the second and third are used for commercial ferry operations, the fourth is closed and the fifth is exclusive to the Royal Bombay Yacht Club. The second and third jetties are the starting point for tours of Elephanta Caves, which is a 50-minute boat ride from the gateway.