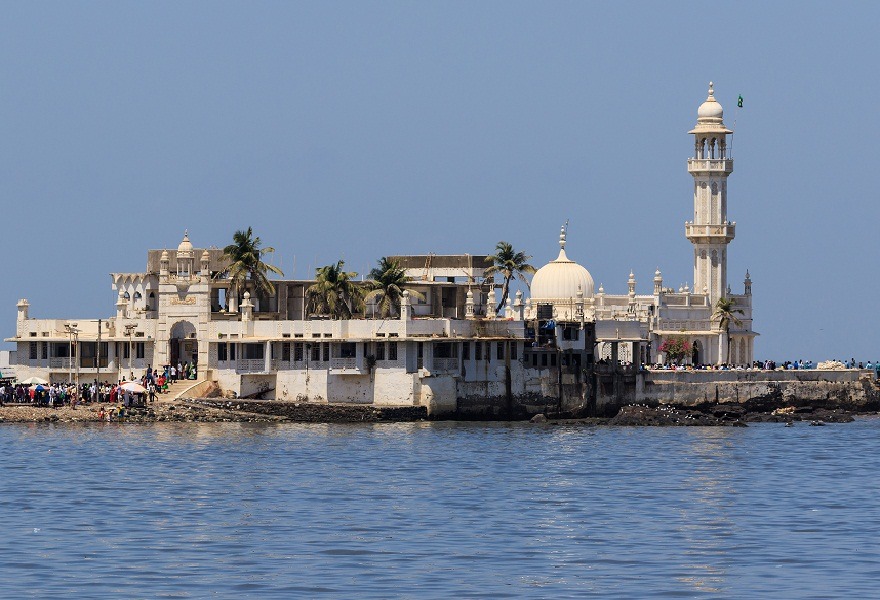 At a distance of 6 km from Mumbai Chhatrapati Shivaji Terminus, Haji Ali Dargah is a renowned Islamic shrine nestled on a small island close to the sea shore of Worli in Mumbai. This is one of the most popular religious places in Mumbai and also one of the major Mumbai places to visit.

Haji Ali Dargah was constructed in 1431 CE, in the memory of a Muslim saint Sayyed Peer Haji Ali Shah Bukhari, who hailed from Bukhara, in present-day Uzbekistan. He came to India to spread Islam and eventually settled in Mumbai. Before death, he expressed his wish that he wanted his shroud to be immersed in water rather than being buried underground. His followers obeyed the wish and constructed a tomb at the spot where his shroud rested after floating in the sea.

Although the original dargah is more than 600 years old, its present structure was built between 1960 and 1964. An exquisite example of Indo-Islamic architecture, Haji Ali Dargah complex sprawls over an area of 5000 sq. m and consists of three main structures - a dargah, mosque and sanatorium. The tomb is a white marble structure with arched frames, exquisite mirror work and a silver crown. A sacred cloth with Quran's verses covers the sacred relics of the saint. The dome above the tomb has mirror work detailing that forms a mosaic of beautiful patterns. There are three halls in the main dargah, of which one is reserved for women. This religious compound has a huge foyer called Qawwal Khana, where qawwali performances take place in the honour of Haji Ali.

This shrine witnesses a huge footfall of devotees who come here and offer homage to the saint, irrespective of their religion, caste, creed and social status. This shrine is visited by over 40,000 people on all days, particularly Thursdays and Fridays. The annual Urs (death anniversary) of Haji Ali is the biggest event here. Another one is Eid-e-Milad-un-Nabi, which marks the birth of Prophet Muhammad.

Tourists can reach the place by taking taxis, auto rickshaws or buses to the Worli bay and then walking up to the dargah. There is a narrow pathway from the Worli bay that connects the shrine with the city. It is just a 500 yard walk for the devotees from the bay to the shrine. Being located in the middle of the sea, the dargah remains closed at the time of high tide.