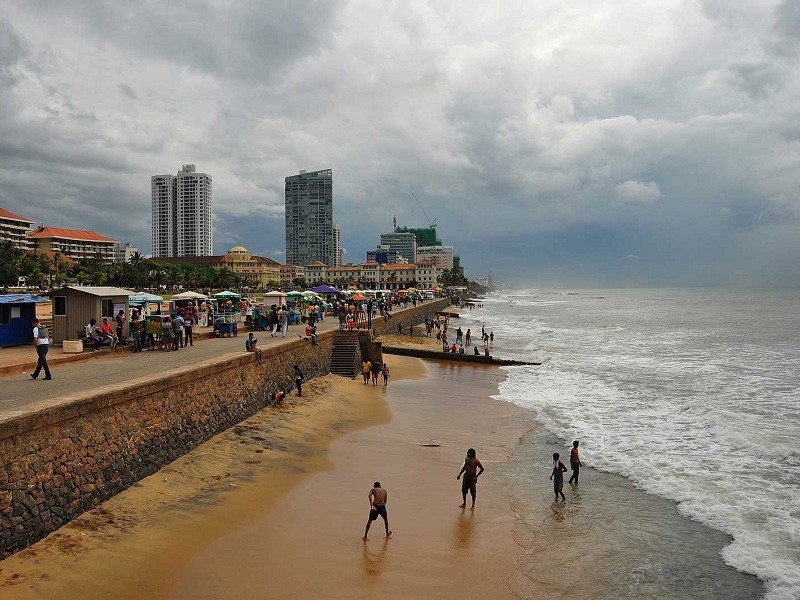 At a distance of 4 km from Colombo Fort Railway Station, Galle Face Green is an urban park located on the seafront in the port city of Colombo. It is one of the popular places to hang out in Colombo and among the prime places to visit as part of your Sri Lanka Tour.

The Galle Face Green in Sri Lanka is a half kilometer promenade in the heart of Colombo. On one end of this stretch of land lies the Ceylon Intercontinental Hotel while on the other side, lies the magnificent Galle Face Hotel. This area is now considered the largest open space in Colombo that is accessible to crowds inclusive of tourists and regular local visitors. The beach is frequented by the locals residing in Colombo, especially on weekends as it makes for the best spot for children to play around and for families to spend some quality time next to the sea under the open sky.

The originally planned Galle Face extended over a much larger area than exists today. The promenade was initially laid out by the Dutch for a military purpose. They used it as a means to enable their cannons a strategic line of fire against the Portuguese. One version of how the name Galle Face is derived is that it is from the original Dutch name for the fortifications. In 1856, the then Governor of British Ceylon, Sir Henry George Ward authorized the construction of a 1.6 km promenade along the oceanside of the Galle Face Green. The promenade was subsequently completed in 1859. The Galle Face Green in Sri Lanka was initially used for many recreational activities such as horse racing and golf and was known as the Colpetty Race Course. It was also used as an area to play cricket, polo, football tennis, and rugby.

Galle Face Green has a lot of fun and exciting things to keep one entertained for most of the day. One can relax and rejuvenate at the beach, or try out some delicious snacks sold by street vendors nearby. One can also visit the nearby Galle Face Hotel or take a fascinating historical tour through the Galle Fort. Take a stroll through the Galle Face Green and enjoy the beautiful evening with the beautiful blend of orange and yellow hues set in the deep blue sky.