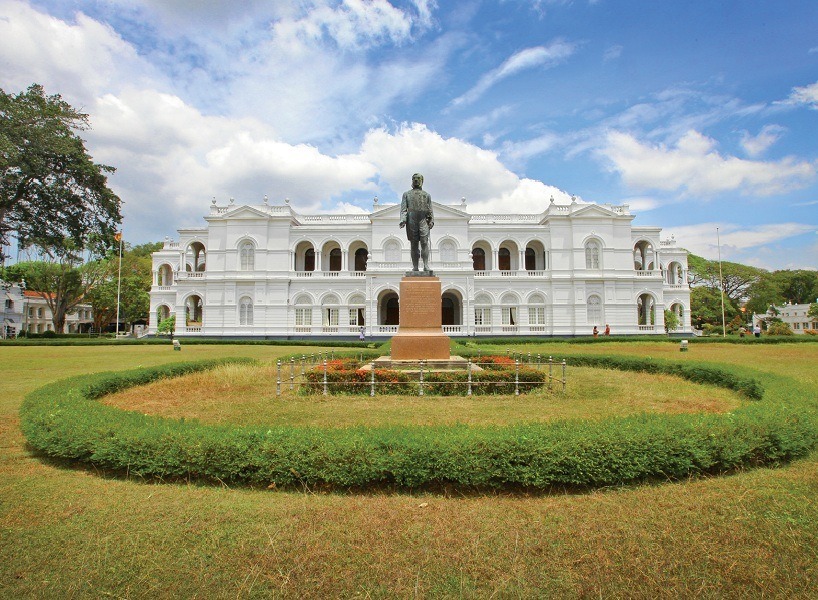 At a distance of 5 km from Colombo Fort Railway Station, the National Museum of Colombo, also known as the Sri Lanka National Museum is one of the two museums in Colombo city. It is the largest museum in Sri Lanka and among the must-visit places as part of Sri Lanka Tour Packages.

The Colombo Museum, as it was called at the beginning, was established in 1877 CE by Sir William Henry Gregory, the then Governor of British Ceylon from 1872-1877. The Royal Asiatic Society (CB) was instrumental in bringing to the notice of Gregory in 1872 the need for a public museum with much difficulty the approval of the legislative council was obtained within a year. Designed by James G. Smither, the construction was completed in 1876 and the museum was opened to the public in the following year. Now, it was maintained by the Department of National Museum of the central government.

Built-in the Italian architectural style, the two stroyed museum has three main sections, including natural science, cultural galleries, and a gift shop. Ground floor galleries are arranged in historical sequence, and upper galleries thematically. The ground floor takes you through the ancient history of Sri Lanka, in successive galleries from prehistory to the periods of ancient cities like Anuradhapura, Polonnaruwa, and Kandy. The main attraction here is the crown jewel and throne of the last King of Kandy, which was returned by the British to the Sri Lankan people. The top floor has 13 galleries displaying paintings, weapons section where one can see the influences of ancient Greek Kopis and Indonesian Pistol grip daggers, textiles, pottery, coins, banners, art & craft, agriculture, and mask displays. An old burner that used hydraulic principles and Sri Lankans producing steel in the iron age will surely make you praise the technology in the era. A large stone Buddha greets visitors with an enigmatic smile in the lobby.

The extensive National Museum Library has been operational since 1877 and was started seven years earlier in 1870 under the name the Government Oriental Library. It has numerous local publications printed over the last 133 years along with many manuscripts in palm leaf written in different languages years ago on varied topics like astrology and folklore. At present, it is the biggest legal depository in the country.

Also, the National Museum is home to a huge collection connected to the natural history of the island. The whole collection is on display in a different building in the same premises, known to all as the National Museum of Natural History, Colombo. Established in 1986, it is the only museum in the country displaying different forms of nature. The special feature is that plants and Animal specimens which are endemic to Sri Lanka, rare and threatened with extinction are displayed in this museum. There is a large collection of specimens such as Mammals, Birds, Reptiles, Insects, Fish, Amphibians of various kinds of Plants and Geological Rocks. Leopard of Punani and the skull of Megacerus giganteus (elk) are the specimens that create curiosity among the visitors.