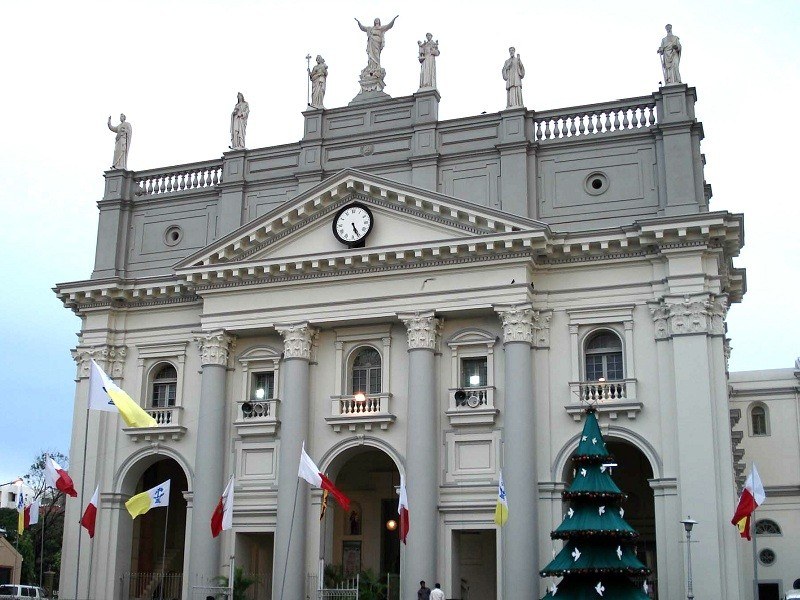 At a distance of 3 km from Colombo Fort Railway Station, St. Lucia's Cathedral is a Roman Catholic Church located Kotahena locality of Colombo. The cathedral is considered the oldest and largest parish cathedral in Sri Lanka and among the top places to visit in Colombo.

St. Lucia's Cathedral is dedicated to saint martyr St. Lucia who is considered to be the protector against all kinds of eye trouble. This is the seat of the Archbishop of the Roman Catholic Archdiocese of Colombo. The cathedral was first built as a small chapel of wood in 1760 when Ceylon was under Dutch occupation. This small structure was later replaced by a more massive shrine made of brick and mortar in the year 1782. St. Lucia's Cathedral became the first church of Sri Lanka after it was detached from the jurisdiction of the Archbishop of Goa. A plan was made in 1872, to build a new cathedral which took roughly 30 years and was fully completed in the year 1902.

St Lucia's Cathedral is a massive structure built in the beautiful Gothic style of architecture. The facade of the church rests on massive ionic columns and it's adorned with seven statues. Silhouetted against the sky is the cross on the concrete lantern crowning the dome, the pinnacle of the cathedral. The interior consists of large statues of saints, beautiful wooden carvings and intricate glass stained windows. Rising above the main altar is a statue of Saint Lucy holding up her eyes on the palm of her hand. In front of the sanctuary, towards the left, one can see a dark-skinned statue of the Madonna referred to as 'Our Lady of Kotahena'.

The highlight of the building is the 4300-pound bell named Anthony Thomas. The bell has intricate engravings of elaborate floral wreaths and holy figures and symbols of Christianity, and it is the largest of the four bells shipped from Marseilles and christened at the cathedral in 1903. It also has a unique pipe organ donated to the cathedral in 1934. This massive structure can easily host around 5000 worshippers.