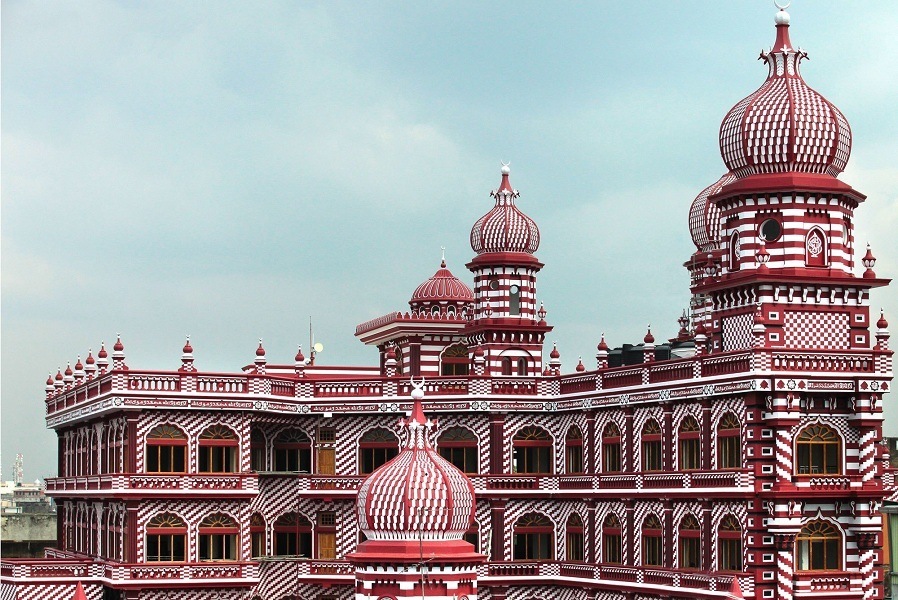 Travel Tips: It is noteworthy that the mosque is only open to men, and female visitors can only appreciate the beauty of the Islamic building from outside. Dress appropriately as this is a place of worship.

At a distance of 1 km from Colombo Fort Railway Station, Jami-ul-Alfar Mosque is a historic mosque located in the Pettah district of Colombo, Sri Lanka. The mosque is one of the oldest mosques in Colombo and among the prime places to visit in Colombo as part of Sri Lanka Packages.

Jami-ul-Alfar Mosque, also known as Rathu Palliya in Sinhala, Samman Kottu Palli in Tamil and Red Mosque in English, is quite a sight in itself and also a big tourist attraction. It was built by the local Indian Muslim community, based in Pettah, in the year 1908 to fulfill their required five-times-daily prayer and Jummah on Fridays. The construction was completed in 1909 and originally it had the capacity for 1,500 worshippers although at the time only around 500 were attending prayers. However, the numbers grew swiftly and in 1975 the Haji Omar Trust took control of the surrounding properties and began the work of expanding the mosque. A new four storied wing was built in 2007, allowing the mosque to increase its capacity to 10,000.

The mosque represents the beautiful Indo-Saracenic style of architecture with pomegranate shaped domes. The design and construction were done by Habibu Labbe Saibu Labbe an unknown architect of the time. It is a distinctive red and white candy-striped two-storey building, with a clock tower, and is reminiscent of the Jamek Mosque in Kuala Lumpur, Malaysia. This is one of the 10 most beautiful mosques in the world. It is said that many sailors in the early 20th century used it as a landmark to approach the port.

It is noteworthy that the mosque is only open to men, and female visitors can only appreciate the beauty of the Islamic building from outside. Dress appropriately as this is a place of worship.

Timings: 9 AM - 5 PM, Closed on Friday for Visitors