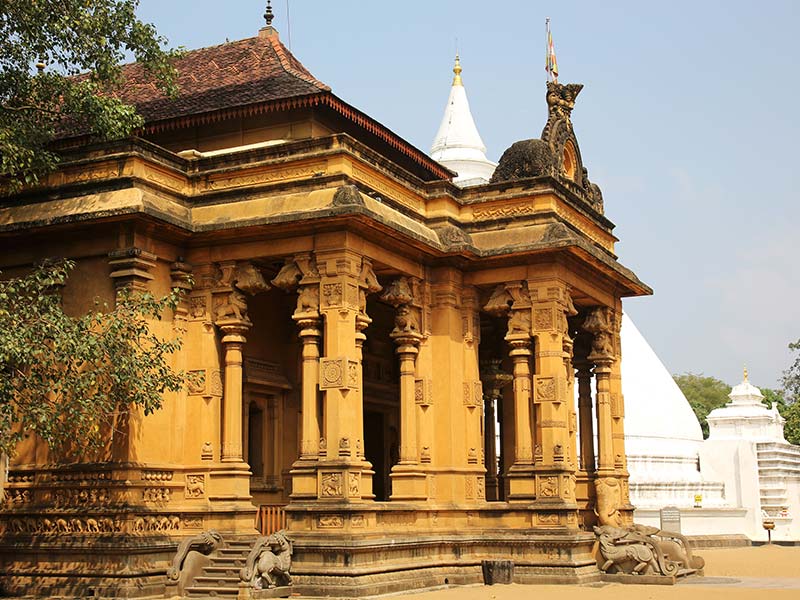 At a distance of 10 km from Colombo Fort Railway Station, Kelaniya Raja Maha Vihara is a Buddhist temple in Kelaniya near Colombo. Also known as Kelaniya Temple, it is one of the popular places of pilgrimage in Colombo and among the best places to visit as part of Sri Lanka Tour.
.

The temple is located on the bank of river Kelaniya and is an ancient archeological monument that was built in the 5th century BCE. The temple has a special significance and is considered to be one of the most sacred sites in Colombo. Legend has it that on the eighth year following enlightenment, Lord Buddha visited Kelaniya with 500 monks on the invitation of King Maniakkhikha to preach the dhamma. A stupa was built on the place where the Buddha preached his sermon.
The original temple was destroyed by a lot of invaders but the temple had been reconstructed each time. The medieval temple was destroyed by the Portuguese in 1510 yet reconstructed by King Kirthi Sri Rajasingha in the year 1769. Spread over an area of about 10 acres, the temple is divided into four major sections known as Ran Pilima Ge means the Golden Buddha Image House, 'Raja Pilima Ge', also called as the King's Image House,' Aluth Vihara Ge' or the New Temple House and Oth Pilima Ge' or the Reclined Buddha Image House. The new temple was initiated in 1927 and completed in 1946 under the patronage of philanthropist Mrs. Helena Wijewardene.

There are various paintings, sculptures, and statues from the ancient period while the main attraction is the stupa that is 90 feet high and looks astounding. Its stupa is believed to have enshrined a throne studded with gems, on which Buddha sat and preached. The temple is also famous for its Kandyan era paintings and modern paintings done by the native artist Solias Mendis which depict important events in the life of the Buddha, the major events of the history of Buddhism in Sri Lanka and various Jataka tales.

The temple is largely visited by Buddhists from all over the world, especially during the Duruthu Maha Perehera which is held at the temple's hollow Dagoba every year in January. A large number of people also pilgrimage on Poya day ( full moon day of the month ) and conduct several religious programs here.