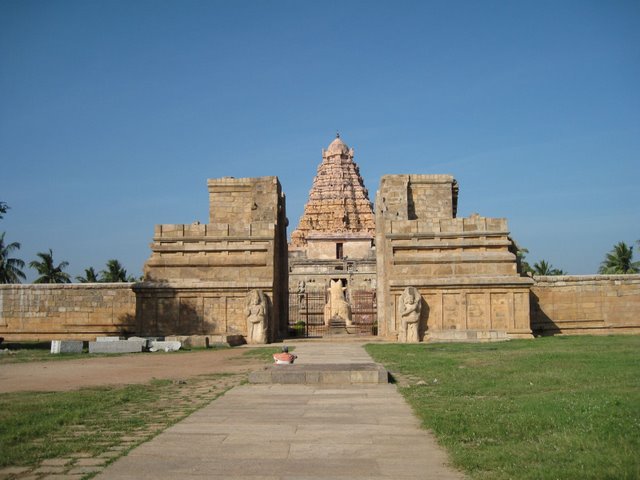 #3 of 12 Places to Visit in Chidambaram

Travel Tips: This place can be also visited from Thanjavur & Kumbakonam

At a distance of 42 km Chidambaram, 76 km from Thanjavur, 110 km from Trichy & 268 km from Chennai, Gangaikonda Cholapuram is a historical town situated near Chidambaram. It is one of the popular places of heritage in Tamilnadu, and among the must visit places during Chidambaram tour.

Gangaikonda Cholapuram became the capital of Cholas during the reign of Rajendra Chola I in 1025 CE and served as the Chola capital for around 250 years. This historical town is home to the renowned Brihadeeswarar Temple. It was built by Rajendra Chola I, the son and successor of Rajaraja Chola. This temple is part of the UNESCO World Heritage Site 'Great Living Chola Temples'.

Rajendra Chola I has established this temple after his great victories in Northern India. He was originally called Madurantakan and assumed the title of Rajendra during his coronation and continued to rule along with his father Rajaraja-I for a while. Gangai Konda Cholapuram is regarded as the reproduction of the Brihadisvara Temple that was built by Rajaraja Chola, father of Rajendra Chola. The temple is renowned for having the biggest Shivalingam in the Southern part of India.

Among the top Chidambaram tourist places, the temple was located at the center of the Gangai Konda Cholapuram and occupies around 6 acres of land. The temple has 2 enclosures surrounding the vimana, most of the wall was destructed and the granite rocks were used to construct a dam during British rule. The Archeological Survey of India has renovated and restored the vimana. The 182 feet tall tower over the sanctum is the second biggest after the Tanjavur temple.

The Linga in Gangai Konda Cholapuram temple is 13.5 feet tall. The Nandi, vehicle of Lord Shiva is also bigger than Thanjavur. The Nandi in this temple is made of limestone and placed on the ground, 200 meters away from the sanctum in this temple. Sunlight falls on Nandi each day and reflects on the Lord in the sanctum.

A rare stone called Chandrakanta stone is installed under the Linga which has a strange characteristic of making the sanctum sanctorum cool in summer and warm in winter. Mother Periya Nayaki, is 9.5 feet tall standing majestically. Mother Durga in the temple graces the devotees as a 9-year-old pretty smiling little girl with 20 hands killing demon Mahishasura. She is the family deity of King Rajendra Chola. Now, most of the city is destroyed and only the temple of Gangai Konda Cholapuram survives.

Maha Shivratri in February-March, full moon day in October-November, Panguni Utsav in March-April, and Margazhi Tiruvadhirai in December-January are the festivals celebrated in the temple.