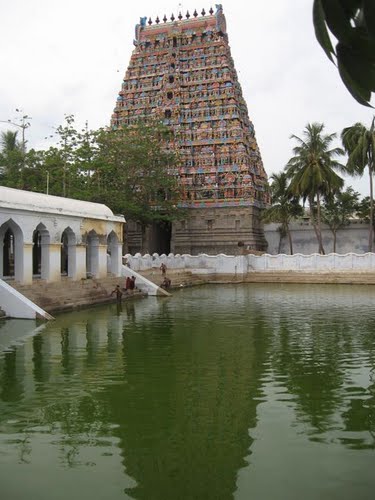 #5 of 12 Places to Visit in Chidambaram

At a distance of 37 km from Kumbakonam, 37 km from Karaikal and 42 km from Chidambaram, Mayiladuthurai is a town and headquarters of the Mayiladuthurai Taluk in Nagapattinam district of Tamil Nadu. Mayiladuthurai is known for the Mayuranatha Swamy Temple dedicated to Lord Shiva. This temple is one among the six temples which are compared as equivalent to the temple in Varanasi. The other 5 Shivasthalams are Tiruvenkaadu, Chaayaavanam, Tiruvaiyaru, Tiruvanchiam and Tiruvidaimarudur.

This temple was reconstructed with stone in 10th century during the period of Sembiyan Mahadevi. However, the renovations from the 19th century have destroyed some of the older structures and the inscriptions. Some of the stone sculptures of Vinayakar, Natarajar, Dakshimamurthy, Lingodbhavar, Brahma, Ganga Visarjanamurthi, Durga and Bhikshatanar from the period of Sembiyan Mahadevi have been well preserved.

The main diety is in the form of lingam called Mayuranathar and his consort Abhayambika appears as a peacock worshipping the Lord here. According to legend, Daksha, father of goddess Parvathi, conducted a Yagna but intentionally didn't invite Lord Shiva to humiliate him. Lord Shiva did not want Parvathi also to attend the Yagna. But Goddess Parvathi attended the function and was humiliated by Daksha. Lord Shiva in Veerabadra form and destroyed the Yagna. As Parvathi ignored Lord's advice, she was cursed to become a peacock. She came to this place as a peacock and performed severe penance for Lord Shiva. Lord Shiva appeared before her as a Peacock himself and danced Mayura Thandavam. Ambica got back to her original form. As Lord came here as a Mayura, he is praised as Mayuranathar.

This temple is spread over 8 acres with 5 enclosures, a 165 feet tall Raja Gopura, pillared halls and 14 vimanas (sikharas). The temple is managed by the Tiruvavaduturai Mutt. Lord Muruga in the prakara is praised by saint Arunagiriar in his Tirupugazh hymns. There is a separate shrine for Lord Nataraja. The first puja in the evening is dedicated to Lord Nataraja. Mayilamman shrine is opposite to Nataraja shrine where both Lord and Mother grace in the form of peacock. Two peacocks and two monkeys are depicted in the banyan tree above the Lord Dakshinamurthy sculpture on outer walls of the temple.

There is a large temple tank in the centre of the complex. People visit this temple in large numbers on the new moon day in the Tamil month of Aipasi and take bath in the tank. It is believed that this bath purifies a person of sins. Vaikasi Brahmotsavams in May-June, Aipasi Thula Snanam in October-November and Laksha Deepam on the last Friday of Aadi month (July-August) are the festivals celebrated in the temple. An annual dance festival called the Mayura Natyanjali festival is celebrated within the premises of the temple.