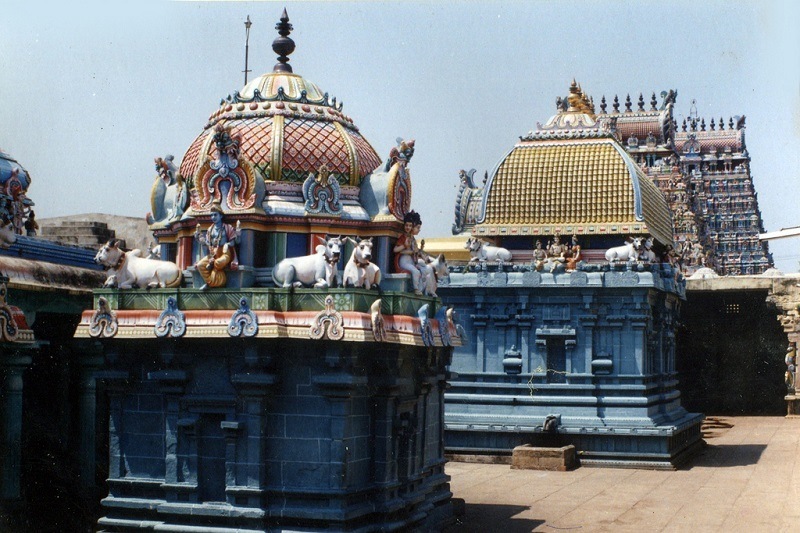 #4 of 12 Places to Visit in Chidambaram

At a distance of 23 km from Karaikal, 23 km from Mayiladuthurai, 44 km from Chidambaram and 57 km from Kumbakonam, Thirukkadaiyur is a popular temple town located on the east coast of Tamil Nadu in the Nagapattinam district. The Amritaghateswarar - Abirami Temple, dedicated to Lord Shiva is the most famous temple in Thirukkadaiyur.

The presiding deity of this temple is Sri Amirthalingeswara and his consort is Sri Abirami. Thirukkadaiyur is one of the 8 Veera Sthalas, where Yama was clashed with Lord Shiva. It is believed that this is the place where Lord Shiva protected Markandeya, son of Mrikandu, from Yama. The scar caused by the Yama's rope is visible on the Linga during abisheka times.

The temple was built by Chola kings in 11th century in the traditional Chola architectural style. Spread over 11 acres, the temple has great architecture and has five enclosures, huge towers and spacious mandapas. Based on the inscriptions seen here, the main shrine (sanctum) was in existence before early 11th century. The brick walls of the temple were replaced with stonewalls and the front mandapa was constructed during the period of Kulottunga Chola I. According to legend, when devas and asuras churned milk ocean to get Amritham, they forgot to worship Lord Ganesha. Lord Ganesha hurt and stole the pot of Amritham and kept at Thirukkadaiyur. While there, Ganesha created a Shiva Lingam and poured some of the Amritham over it. For this reason, the Shiva Lingam at this temple is known as Amrita Ghat Eshwarar, which means Lord that leads to immortality, the lord Ganesha is called Kalla Vinayagar or Kalaivanar Pilliyar.

There is a separate shrine dedicated to Abirami. It is believed that a devotee of Goddess Abirami, Abirami Battar, meditated at this temple during the reign of Tanjore Maratha King Serfoji. Abirami Battar sung 100 hymns to praise the goddess, who saved him from the king.

The temple also maintains a separate shrine for Markandeya, the great devotee of Lord Shiva. There are three holy water tanks in the temple, namely the Kaala Theertham, Maarkandeya Theertham and Amrita Pushkarini. It is one of the 275 Paadal Petra Sthalams, where Appar, Suntharar and Tirugnana Sambhandar have sung the glories of this temple.