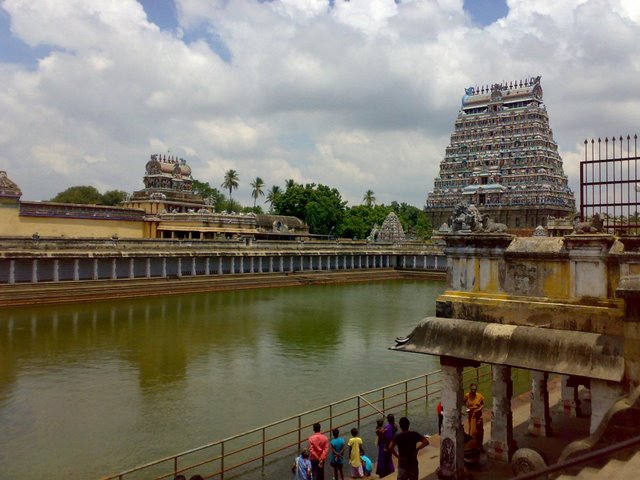 At a distance of 43 km Cuddalore, 43 km Mayiladuthurai, 66 km from Pondicherry, 85 km from Nagapattinam, 189 km from Kanchipuram, 217 km from Chennai, 303 km from Madurai and 173 km from Trichy, Chidambaram is a pilgrimage town in the Cuddalore district of Tamil Nadu. Well known for Nataraja Temple, Chidambaram is one of the most celebrated shrines in South India and among the most popular places of pilgrimage in Tamilnadu.

Also known as Thillai, Chidambaram is one of the famous places to visit near Trichy. Chidambaram Temple has great religious as well as historic and cultural significance. This is one of the Panchabhoota Stalas signifying the five elements of wind (Kalahasti), water (Tiruvanaikka), fire (Tiruvannamalai), earth (Kanchipuram) and space (Chidambaram). It is one of the must visit places as part of Chidambaram tour packages.

The name Chidambaram comes from the Tamil word Chitrambalam which means the small hall or stage of wisdom. According to legend, it was once a forest of thillai, a mangrove species of trees. There was once a small shrine on the banks of a tank. The saints Vyagrapada and Patanjali are said to have worshipped at this shrine, now called Thirumoolanathar. It is believed that their penance attained perfection with the revelation of Shiva's cosmic dance by Lord Nataraja on the auspicious Thai Poosam day.

The town of Chidambaram has been ruled by many kingdoms over the centuries, most notably the Medieval Cholas, Later Cholas, Pandyas, Vijaynagar Kingdom, the Marathas, and the British. The town is known for the Thillai Nataraja Temple and the annual chariot festival held in the month of April. Chidambaram Nataraja Temple was built during the 11th century and is one of the most celebrated Shaivite Temples in South India. Lord Nataraja is the family deity of Vikrama Chola (1128 CE) and his successors. The golden hall of dance was built and covered with gold plates by Jatavarman Sundra Pandya.

Brahmotsavam, Ani Thirumanjanam, Thai Poosam and Arudra Dharshan are some of the Chidambaram temple festivals that attract large crowds from far and nearby places. Natyanjali Dance Festival is a major festival held in the month of February. Many eminent dancers give their performances during this festival.

How to Reach Chidambaram - Full Details

Top 10 Places to Visit in Chidambaram

#1 of 12 Places to Visit in Chidambaram

At a distance of 2 km from Chidambaram Bus Station, Nataraja Temple is an ancient Hindu temple located in Chidambaram town in Tamil Nadu. It is one of the ancient temples in South India, and among the must include places in Chidambaram tour packages.

Also referred to as the Chidambaram Nataraja Temple or Thillai Nataraja Temple, the Nataraja Temple is dedicated to Nataraja - Shiva as the lord of the dance. It is one of the five Panchbootha Sthalas of Lord Shiva, and it denotes the Skies. The temple has mythical roots and a Shiva shrine existed at the site when the town was known as Thillai. Chidambaram, the name of the city and the temple literally means 'atmosphere of wisdom' or 'clothed in thought', the temple architecture symbolizes the connection between the arts and spirituality, creative activity, and the divine.

The temple was constructed during the 10th Century .....

#2 of 12 Places to Visit in Chidambaram

At a distance of 16 km from Chidambaram & 217 km from Chennai, Pichavaram is an exquisite coastal village near Chidambaram in the Cuddalore district of Tamil Nadu, India. It is one of the picturesque places to visit near Chennai and among the must include places in Chidambaram packages.

Located between the Vellar estuary and Coleroon estuary, Pichavaram is well-known for its mangrove forests spread over 1100 hectares area. The mangroves of Pichavaram are considered the second largest mangrove forests in the world. Apparently, the forest has more than 50 islands of various sizes and 4,400 big and small canals. The trees grow in water that's 3 to 10 feet deep in different places. The conditions are quite hostile, as the sea's tides bring saltwater in and out twice a day, changing the salinity. Hence, the trees have unique root systems, with membranes that only allow fresh water to .....

#3 of 12 Places to Visit in Chidambaram

At a distance of 42 km Chidambaram, 76 km from Thanjavur, 110 km from Trichy & 268 km from Chennai, Gangaikonda Cholapuram is a historical town situated near Chidambaram. It is one of the popular places of heritage in Tamilnadu, and among the must visit places during Chidambaram tour.

Gangaikonda Cholapuram became the capital of Cholas during the reign of Rajendra Chola I in 1025 CE and served as the Chola capital for around 250 years. This historical town is home to the renowned Brihadeeswarar Temple. It was built by Rajendra Chola I, the son and successor of Rajaraja Chola. This temple is part of the UNESCO World Heritage Site 'Great Living Chola Temples'.

Rajendra Chola I has established this temple after his great victories in Northern India. He was originally called Madurantakan and assumed the title of Rajendra during his coronation and continued to rule along with .....

#4 of 12 Places to Visit in Chidambaram

At a distance of 23 km from Karaikal, 23 km from Mayiladuthurai, 44 km from Chidambaram and 57 km from Kumbakonam, Thirukkadaiyur is a popular temple town located on the east coast of Tamil Nadu in the Nagapattinam district. The Amritaghateswarar - Abirami Temple, dedicated to Lord Shiva is the most famous temple in Thirukkadaiyur.

The presiding deity of this temple is Sri Amirthalingeswara and his consort is Sri Abirami. Thirukkadaiyur is one of the 8 Veera Sthalas, where Yama was clashed with Lord Shiva. It is believed that this is the place where Lord Shiva protected Markandeya, son of Mrikandu, from Yama. The scar caused by the Yama's rope is visible on the Linga during abisheka times.

The temple was built by Chola kings in 11th century in the traditional Chola architectural style. Spread over 11 acres, the temple has great architecture and has five enclosures, huge towers and spacious mandapas. Based on the inscriptions .....

#5 of 12 Places to Visit in Chidambaram

At a distance of 37 km from Kumbakonam, 37 km from Karaikal and 42 km from Chidambaram, Mayiladuthurai is a town and headquarters of the Mayiladuthurai Taluk in Nagapattinam district of Tamil Nadu. Mayiladuthurai is known for the Mayuranatha Swamy Temple dedicated to Lord Shiva. This temple is one among the six temples which are compared as equivalent to the temple in Varanasi. The other 5 Shivasthalams are Tiruvenkaadu, Chaayaavanam, Tiruvaiyaru, Tiruvanchiam and Tiruvidaimarudur.

This temple was reconstructed with stone in 10th century during the period of Sembiyan Mahadevi. However, the renovations from the 19th century have destroyed some of the older structures and the inscriptions. Some of the stone sculptures of Vinayakar, Natarajar, Dakshimamurthy, Lingodbhavar, Brahma, Ganga Visarjanamurthi, Durga and Bhikshatanar from the period of Sembiyan Mahadevi have been well preserved.

#6 of 12 Places to Visit in Chidambaram

At a distance of 17 km from Mayiladuthurai, 27 km from Chidambaram, 45 kms from Karaikal, 54 km from Kumbakonam and 94 km from Thanjavur, Vaitheeswaran Koil is town in Nagapattinam district which is famous for the Vaidyanatha Swamy Temple. The temple is also known as Pullirukkuvelur.

Vaidyanatha Swamy and Thaiyalnayaki are the presiding deities of this temple. The Selva Muthukumara Swamy shrine here is also considered to be of important. There are Shiva lingas said to have been worshipped by Rama, Jatayu, Skanda, Surya and Angaraka. It is believed that Rama and his brother Lakshmana cremated the vulture king Jatayu who was killed by Ravana when he tried to prevent the abduction of Sita at this place. There is a pond at this temple called Jatayu kundam.

It is one of the Navagraha temples associated with the planet Mars (Angaraka). According to legend, Planet Mars was once afflicted with leprosy and was cured by Vaidyanatha .....

#7 of 12 Places to Visit in Chidambaram

At a distance of 40 km from Chidambaram, 40 km from Karaikal, 90 km from Thanjavur & 257 km from Chennai, Poompugar is a coastal town in the Mayiladuthurai district of Tamil Nadu. It is one of the major places to visit as part of Chidambaram trip.

Poompuhar was once a flourishing ancient port city known as Kaveri Poompattinam and was at its peak of glory under the earlier Chola kings. The River Kaveri is merging with the sea here. It was known as Puhar due to the exquisite beauty of the port town, and it later came to be called Poompuhar. Silappathikaram and Manimekalai, the Tamil epics, bring out the greatness of the city in some of the poems in Sangam literature.

It has now been established by marine archaeological research (conducted by the National Institute of Marine Archaeology, Goa) that much of the town was washed away by progressive erosion and floods. As per archaeological evidence found during excavation, this .....

#8 of 12 Places to Visit in Chidambaram

At a distance of 20 Kms from Chidambaram, 45 kms from Karaikal and 110 Kms from Thanjavur (located in Nagapattinam district), the Bhramapureeswarar temple in Sirkazhi is build by the Chola kings of Vikrama Chola, Kulottunga II and III in 10th Century.

The famous Thirumulaippal Utsav is held every year during Chithirai month.

#9 of 12 Places to Visit in Chidambaram

Once when Shiva and Shakti competed with each other in dancing, Shiva struck a fabulous pose, lifting his leg high. Shakti could not match that pose because of modesty, and so lost the contest. By the rules of the contest, the loser had to leave Thillai and reside outside. So Shakti moved to a location at the edge of the kshetra and a Kali Temple came up there. Thillai Kali is credited with curative powers and showers health and prosperity on those who worship her. The black Goddess Kali has a diamond on her forehead.

#10 of 12 Places to Visit in Chidambaram

At a distance of 40 Kms from Chidambaram, the Sillappathikara Art Gallery is situated in Poompuhar town.

The 'Magara Thoranavayil' at the entrance of the Art Gallery at a height of 22.5 feet imparts an imposing and beautiful look to the whole structure. It has been designed on the pattern of Magara Thorana Vayil, found in Suruli Malai Mangala Devi Koil. There is also an anklet shaped tank in the Art-Gallery. On this side of this tank are installed the statues of Kannagi and Madavi.

Scenes from Sillappathikaram, the Epic of the land have been given lively shapes in stones on the walls of the Gallery. These sculptures carved by the sculptors of Mamallapuram Art College remain the treasure house of Tamil Culture.