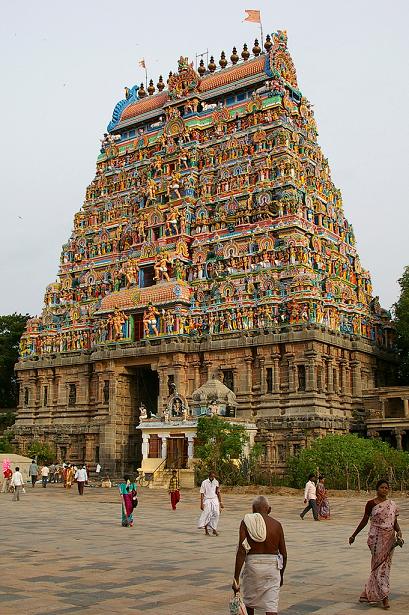 #1 of 12 Places to Visit in Chidambaram

At a distance of 2 km from Chidambaram Bus Station, Nataraja Temple is an ancient Hindu temple located in Chidambaram town in Tamil Nadu. It is one of the ancient temples in South India, and among the must include places in Chidambaram tour packages.

Also referred to as the Chidambaram Nataraja Temple or Thillai Nataraja Temple, the Nataraja Temple is dedicated to Nataraja - Shiva as the lord of the dance. It is one of the five Panchbootha Sthalas of Lord Shiva, and it denotes the Skies. The temple has mythical roots and a Shiva shrine existed at the site when the town was known as Thillai. Chidambaram, the name of the city and the temple literally means 'atmosphere of wisdom' or 'clothed in thought', the temple architecture symbolizes the connection between the arts and spirituality, creative activity, and the divine.

The temple was constructed during the 10th Century when Chidambaram used to be the capital of the Chola dynasty, making it one of the oldest surviving active temple complexes in South India. The Cholas considered Lord Shiva as Nataraj as their family deity. The Nataraj temple has undergone damage, renovation, and expansion throughout the 2nd millennium. Most of the temple's surviving plan, architecture, and structure are from the late 12th and early 13th centuries, with later additions in a similar style. Although Shiva is the main deity of the temple, it also represents major themes from Vaishnavism, Shaktism, and others with all due reverence.

Sprawling over 40 acres complex, the Lord Nataraja Temple situated in the heart of the city is one of the most beautiful examples of the genius of Chola architecture. The roof of the sanctum sanctorum is covered with gold plates. The presiding deity of the temple is represented by air, one of the five elements of the universe, and is known as Akasa Lingam. The temple is one of only five places where he is represented as an idol instead of a lingam. The temple wall carvings display all the 108 karanas from the Natya Shastra by Bharata Muni, and these postures form a foundation of Bharatanatyam, a classical Indian dance.

The temple has five main Halls or Sabhas namely the Kanaka Sabha, the Cit Sabha, Nritta Sabha, Deva Sabha, and Raja Sabha. Shiva himself is presented as the Nataraja performing the Ananda Tandava ('Dance of Delight') in the golden hall of the shrine Pon Ambalam. Chidambaram is also amongst one of the most celebrated shrines of Lord Shiva in the country and among the top Chidambaram places to visit. The place also bears significant importance scientifically as this temple is located at the center point of the world 's Magnetic Equator.

The Marghazhi Thiruvaadhirai, Chittirai Thiruvonam, Aani Thirumanjanam are the key festivals with the main deity being brought outside the sanctum sanctorum in a procession that included a temple car procession followed by a long anointing ceremony.