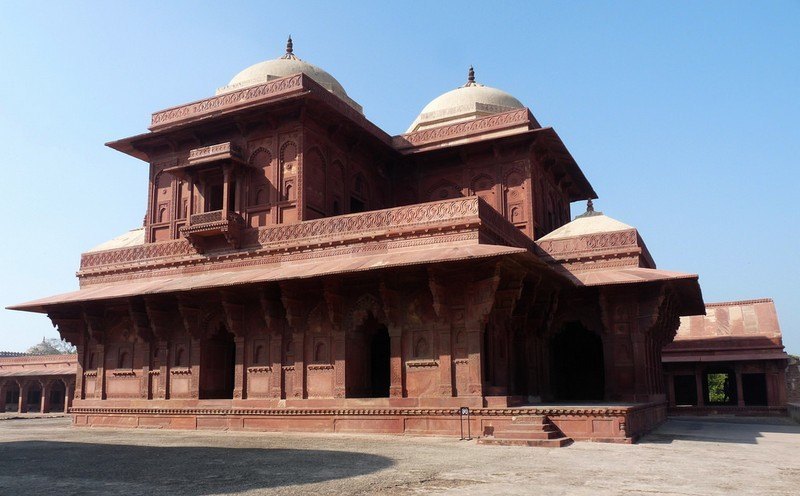 At a distance of 1 km from Fatehpur Sikri Railway Station, Birbal's Palace is situated in the northwest corner of Jodha Bai's palace inside the complex of Fatehpur Sikri Fort.

Birbal's Palace is one of the important monuments in Fatehpur Sikri and is the residence of Raja Birbal, Akbar's Hindu Prime Minister, one of the most trusted persons and was also one of the Navratnas or Nine Jewels in Akbar's court. It was built in 1571 and is believed to be part of the Imperial Harem and housed Akbar's senior queens, Ruqayya Begum and Salima Begum.

The architecture of the Birbal's Palace is based on the typical Mughal style. It is a two storeyed structure. The ground storey is made up of four rooms, while the upper storey is made up of two rooms and open terraces. These rooms are interconnected with open doorways. The upper rooms are roofed by dome-like towers while the porches have pyramidal roofs, all of which are constructed to keep the interior cool.

There are exquisitely carved pilasters inside the building which divide the interior of the building into three parts. The first floor has beautiful Jharokhas overlooking the court below with a simple projected chajja. Each dome of the upper rooms rests on an octagonal drum, which is also carved with a raised floral pattern. The domes are crowned by an inverted lotus and also have the traces of tile work. Though the entire construction is composed of lintels and beams, beautifully carved brackets have been used to span the spaces between the pillars and arches. These brackets are carved on both faces with lotus and arabesque designs.