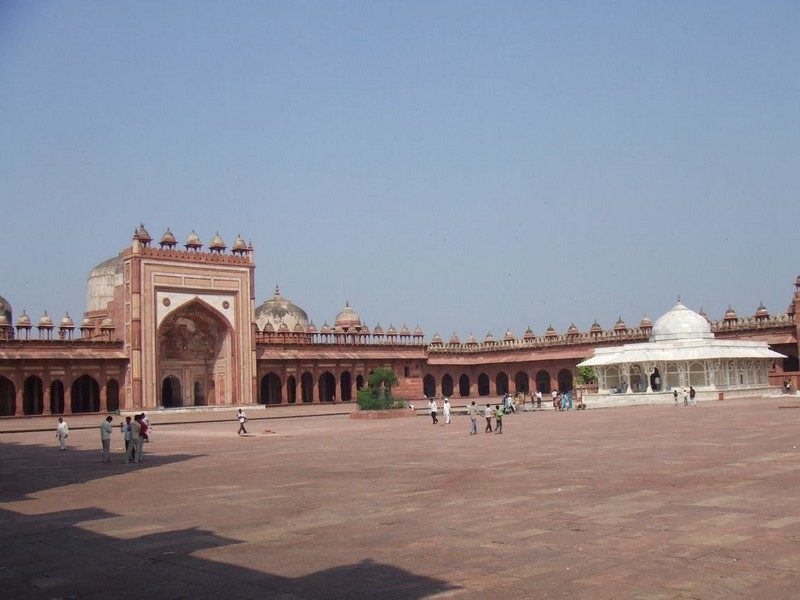 #2 of 17 Places to Visit in Fatehpur Sikri

Travel Tips: This monument along with other structures in Fatehpur Sikri Fort are UNESCO World Heritage Sites

The Jami Masjid was built by Akbar in 1571-72 AD. This is also called Friday mosque. It is the congregational mosque and was perhaps one of the first buildings to be constructed in the complex. It was built under the supervision of Sufi Saint, Sheikh Salim Chishti and his descendants.

The structure of the Jama Masjid is in a rectangular form and is placed on an elevated platform. The mosque has a large courtyard and has gateway entrance from North, South and East. There are series of square shaped chhatris topped by beautiful brackets situated on the other three sides. In its south is the Buland Darwaza and on the east side is the Badshahi Darwaza. Buland Darwaza is the main and largest entrance of the two. Badshahi Darwaza is the royal gateway, which is towards east. It was used by Akbar the Great for entering the mosque. Buland Darwaza is a grand and beautiful structure and it is the highest gateway in the world.

Jami Masjid is attractively decorated with glazed tiles, carvings, inlaid stones and paintings. The rectangular mosque comprises a large single dome, two halls on either side, with two square chambers crowned with domes. Carved mihrabs adorn the main chamber and the two smaller rooms. The mosque has five main entrances to the praying area. The walls comprise of delicate and intricate carvings and inscription taken from the Holy Quran. The exterior is built with attractive red sandstone and white marble with detailed finishing. The center courtyard is vast and open, and can accommodate almost 25,000 people at a time. Sheikh Salim Chishti's Tomb is situated in the courtyard. The tomb is well known for its delicate carvings.