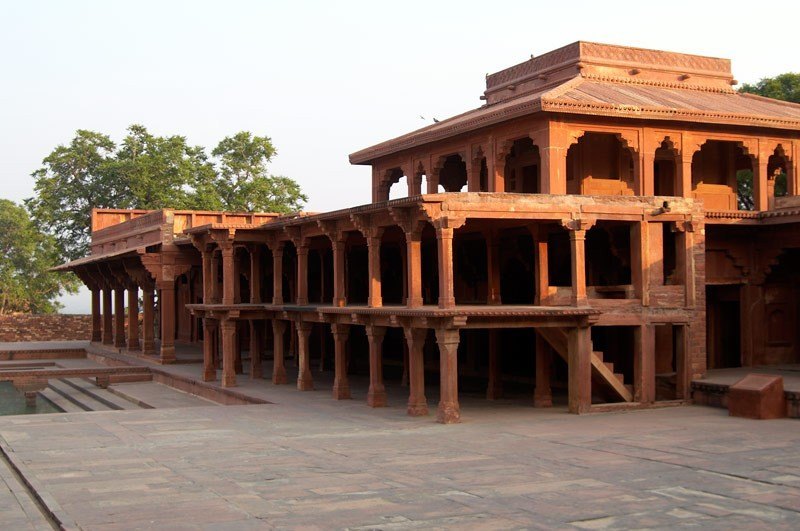 At a distance of 1 km from Fatehpur Sikri Railway Station, Khwabgah is situated towards southern side of Anoop Talao inside the complex of Fatehpur Sikri Fort.

Khwabgah Complex is also called the Dream Palace. It is the most beautiful building of royal complex and it was the personal palace of the Emperor. This double storied building is built with red sandstone. The ground floor is very simple, while the first floor is excellently ornamented.

The building is one of the most well planned buildings of Fatehpur Sikri. It has two rooms at ground floor and a well-ventilated pavilion at the first floor. The rooms at lower floor were probably used as a library and a dining hall. It is believed that the library or Kutub Khana of Akbar had more than 25000 manuscripts along with his important official documents. This complex was also connected to the offices (Dafter Khana) of the royal complex.

The bedroom known as Khilwatkada-i-Khas was surrounded by a pillared verandah with a stone-tiled sloping roof. The room is beautifully decorated and has carved panels and beautiful mural paintings depicting scenes from the Mughal court on the walls. The walls also have some Persian inscriptions praising the beauty of the palace and relating it to heaven. It was connected to the imperial harem and Panch Mahal through an enclosed passage. There is a big window in one portion of the lower floor that is known as Jharokha. The Emperor showed himself daily to the general public through this Jharokha.

Abdar Khana is located to the northern side of Khwabgah. This is a double storied building which has deep shelves with arched screens for storing tropical fruits like melons, grapes and mangoes and water jars for the king.