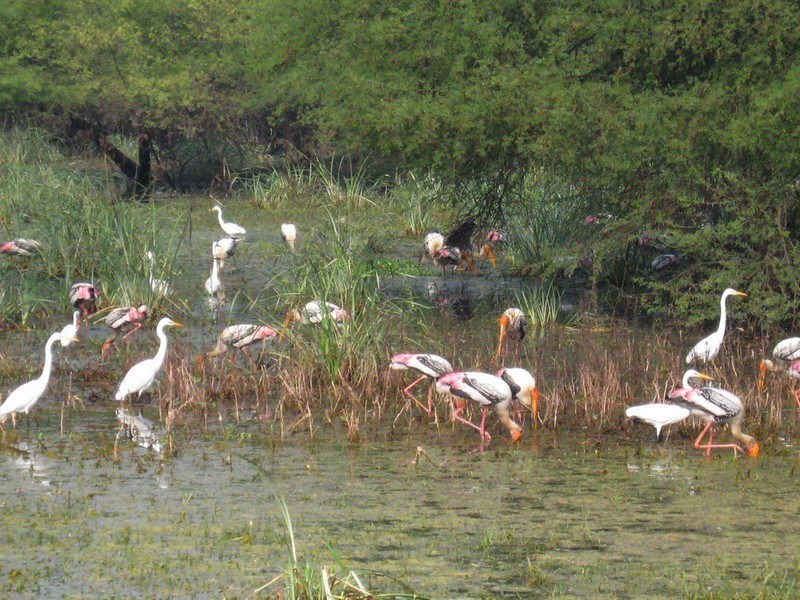 #6 of 17 Places to Visit in Fatehpur Sikri

Place Location: Near Bharatpur In Rajasthan

At a distance of 27 km from Fatehpur Sikri Railway Station and 58 km from Agra, the Keoladeo National Park formerly known as the Bharatpur Bird Sanctuary is situated in Bharatpur, Rajasthan. It is among the top places to visit from Delhi and Agra cities.

Keoladeo National Park is located around a man-made wetland and was created in18th century by Maharaja Suraj Mal of Bharatpur. Formerly the private duck shooting reserve of the Maharajas of Bharatpur and the British Officials, this site was established as a bird sanctuary on 13th March 1976 under the name of Bharatpur Bird Sanctuary. Later on 10th March 1982, the site was designated as a national park and was named Keoladeo Ghana National Park. In 1985, the Park was declared as a UNESCO World Heritage Site.

One of the finest bird parks in the world, Keoladeo, the name derives from an ancient Hindu temple, devoted to Lord Shiva, which stands at the center of the park. Ghana means dense, referring to the thick forest. This is home to more than 230 resident and migratory bird species in a protected area of 29 sq. km.

The park is most famous for its species of birds, including Cranes, Spoonbills, Herons, Pelicans and the rare Siberian Cranes. Every year thousands of migratory waterfowl visit the park for breeding etc. It is also an excellent place to watch mammals like Golden Jackal, Striped Hyena, Fishing Cat, Jungle Cat, Nilgai, Sambar, Blackbuck and wild Boar. During the cool winter months it is also possible to see large Indian Pythons.

Nearby places of interest are the Government Museum and Bharatpur Palace which is an excellent blend of Mughal and Rajput architecture. There is the Lohagarh Fort which remained invincible despite several attacks by the British. Just 32 km from Bharatpur, is the Deeg Palace. This strong and massive fort was the summer resort of the rulers of Bharatpur and has many palaces and gardens.

Own vehicles are not permitted inside the park. At the entrance, cycle rickshaw, Tonga and boat are available for tourists to get around the park. Electric van of the park is also available for visiting the park.

The sanctuary is open throughout the year; while the best time is from August-November for resident breeding birds and October- February for migrant birds.

Note: Timings & Entry Fee are subject to change by the management without any prior notice.