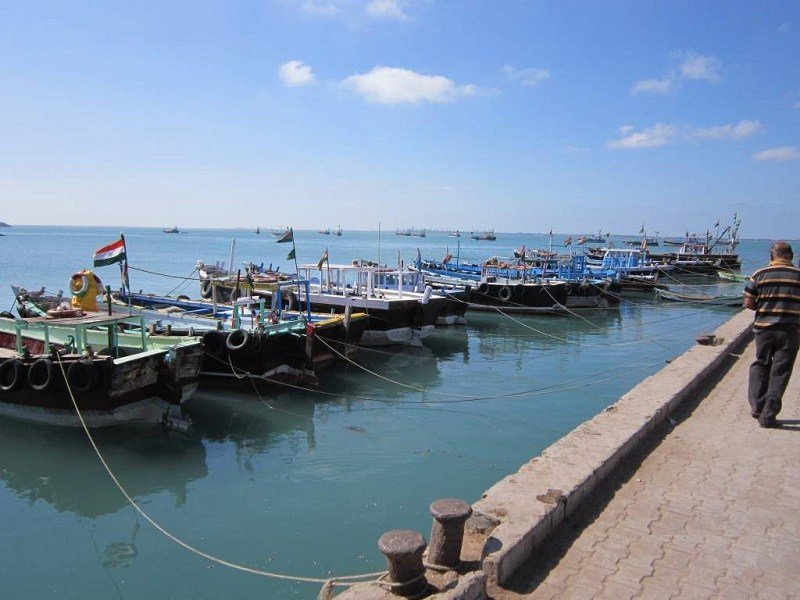 Place Location: At The Mouth Of Gulf Of Kutch

At a distance of 33 km from Dwarka Railway Station, Beyt Dwarka is an inhabited island located off the coast of Dwarka on Gulf of Kutch. Also known as Beyt Shankhodhar, it was one of the main ports of the town before the development of Okha and is among the popular places to visit in Dwarka.

Bet Dwarka or Beyt Dwarka is an extremely sacred pilgrimage destination as it is believed to be the original home of Lord Krishna during his ruling years at Dwarka. It is said that lord Krishna resided with his family at Bet Dwarka. The place derived its name from the word 'beyt' which means meeting and this is the place where Sudhama came to meet his friend Lord Krishna. Beyt Dwarka is also mentioned in the ancient epic, 'Mahabharata' as 'Antardvipa' to which people of the Yadava clan needed to travel by boat. The island is also known as Shankhodhar as the island is source of conch shells.

The ASI explorations revealed that the presence of certain settlements whose age can be traced back to the era of the Harappan civilization and that of the Mauryan rule. Dwarka is mentioned in the copper inscription dated 574 AD of Simhaditya, the minister of Vallabhi under Maitraka. The region was previously under the administration of the Gaekwad clan of the state of Baroda. During the revolt of 1857, Vaghers attacked the region and captured it. After independence of India in 1947, the region became part of the Saurashtra state which later merged with the state of Bombay. When the state of Gujarat was carved out of the Bombay state, Bet Dwarka came under Jamnagar district of Gujarat and became part of Devbhoomi Dwarka district in 2013.

Surrounded by sea from all sides, the island of Beyt Dwarka has a lot of temples, coral reefs and white sand beach. The main temple at Beyt Dwarka is Dwarkadhish Temple dedicated to Lord Krishna, which is believed to be built on the residence of Lord Krishna and His family. This temple is over 500 years old and was built by Sri Vallabhacharya. In addition, one can also visit the temples of Shri Keshavraiji, Narasinhji, Hanuman Dandi and Vaishnav Mahaprabhu Baithak in Beyt Dwarka. There is a narrow street which leads to these temples that are crowded by vendors selling local crafts, idols, cassettes, coconut and seashells.

The bet is surrounded by several sand beaches. Beyt Dwarka Beach is known for its isolation from usual noisy cities. The southeast most end of bet is known as Dunny Point which is three side surrounded by sea. Managed by Sundarvan and camping, it is the first place in Gujarat developed for ecotourism and is also the only marine sanctuary of Gujarat where one can spot few types of corals, crabs, turtles, dolphins etc. The island is has no electricity and mobile network. This is the end of the Beyt Dwarka Island and the site offers basic amenities like tented accommodation, and food for tourists. Tourists can reach this site by boat ride from Okha jetty it will take around 45 minutes. Tourists can also indulge in several activities like bird watching, water polo, kite flying, meditation and cruise vacations.

For visiting Beyt Dwarka, travellers have to first reach Okha port jetty by rail or road, which is around 32 km from Dwarka. From there, tourists can hire a ferry or small boat to visit Beyt Dwarka, which is just 5 km from Okha. Public boats are available which is always crowded around 100 to 150 members per boat. One can also hire a private boat to reach Beyt Dwarka, but it is very costly. One can explore the island by walk or hire an auto from the jetty.