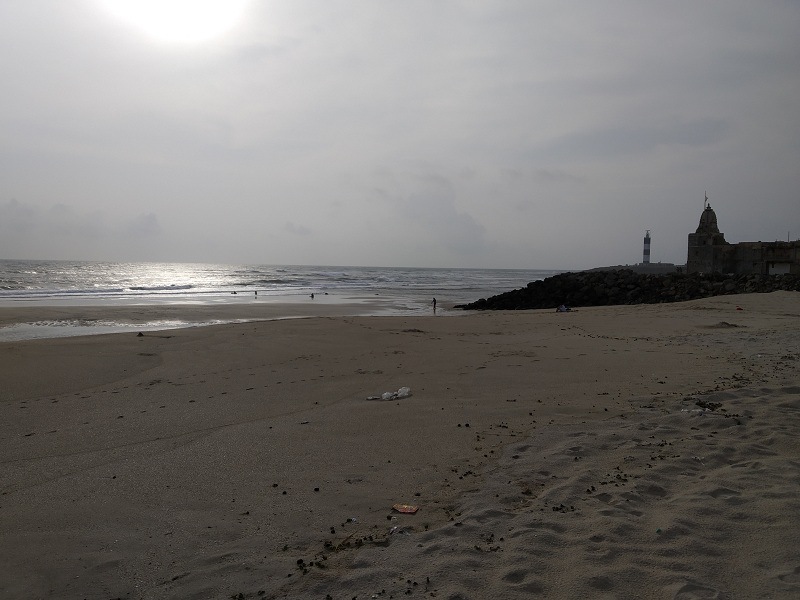 At a distance of 1 km from Dwarkadhish Temple and 4 km from Dwarka Railway Station, Dwarka Beach is a sea beach located in Dwarka, Gujarat. Situated along the Arabian Coast, it is one of the popular beaches in Gujarat, and among the well-known Dwarka tourist places.

Known for its turquoise waters and white sand, this beach is really worth visiting. It is the best place to relax and take a refreshing break from the hustle and bustle of city life during Dwarka trip. This beach is situated close to many temples. The Dwarka Beach is neat and clean that provides a serene and calm environment for the tourists and the pilgrims to sit and spend their evenings. Visitors can also see a large number of sea birds at the beach.

The beach also holds a lighthouse and is one of the major tourist attractions in the city if the temples are taken aside. This 43-meter tower was constructed in 1962 on the westernmost part of Saurashtra Coast called Rupen Creek. Later an RCC baffle wall was introduced in 1964 for the introduction of sound horns equipment and vibrators to work as fog signals. A Racon of Marconi origin was installed on the tower in 1978. Even today this lighthouse is a big landmark for sailors and one can see its powerful flashes from Dwarka City in the evenings. The light from the Dwarka lighthouse is visible up to 16 km. The Dwarka lighthouse is open for visitor in the evenings but one need to get prior permission from the attendant. One can get a panoramic view of Dwarka and the coastline of the Arabian Sea from the top of the lighthouse.