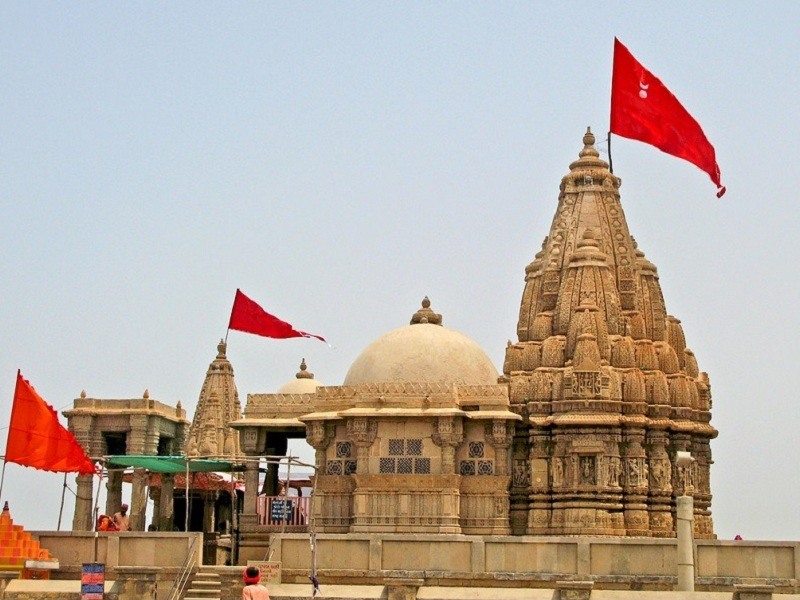 At a distance of 5 km from Dwarka Railway Station, Rukmini Devi Temple is an ancient Hindu temple situated in Dwarka town of Gujarat. Located on Dwarka - Okha Highway, it is one of the important places to visit in Dwarka.

The Rukmini Devi Temple is dedicated to the beloved wife of Lord Krishna, Devi Rukmini, an incarnation of Goddess Lakshmi. The temple is said to be more than 2500 years old, but its domed mandapa and stepped sanctuary belongs to 12th century. The sanctum of the temple has a beautiful marble idol of Devi Rukmani, with four hands holding Shanka, Chakra, Gada and Padma. This shrine is an architectural masterpiece in itself. The rich paintings on the walls depicting Rukmini and Krishna leave the visitors spell bound.

Rukmini Devi Temple is situated 3 km away from the main Dwarkadhish Temple on the banks of Bhagirathi River. According to the legend, once Lord Krishna and his wife Rukmini went to the sage Durvasa to invite him for dinner at Dwarka. He agreed on the condition that Krishna & Rukmini would have to pull his chariot instead of any animal. While pulling the chariot, Rukmini became thirsty so Lord Krishna struck the earth with his foot and Ganga gushed forth. Rukmini took a sip without offering Durvasa. Annoyed by her impoliteness he cursed Rukmini that she would be separated from her beloved husband. Hence Rukmini temple is situated away from Jagat Mandir.