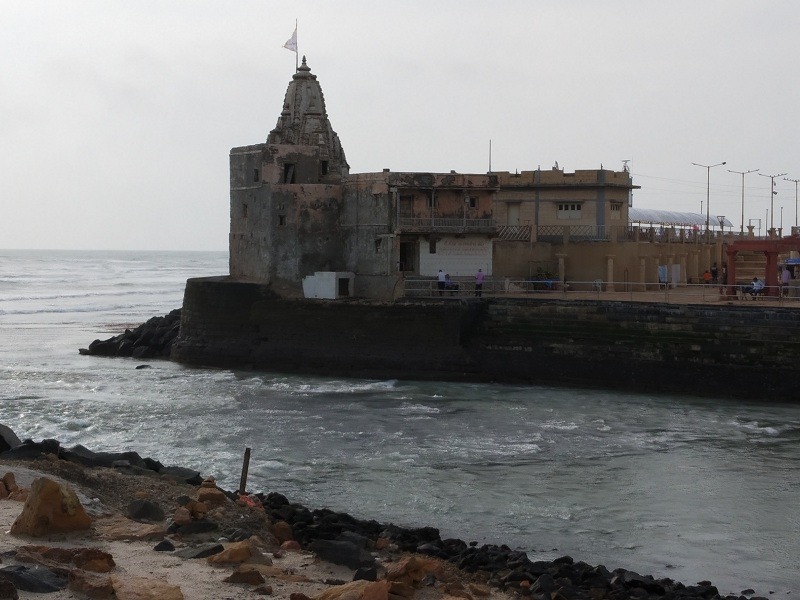 At a distance of 3 km from Dwarka Railway Station, Samudra Narayan Temple is a Hindu temple situated at Gomti Sangam Ghat in the holy town of Dwarka. Located behind the Dwarkadhish Temple, it is one of the must visit temples in Dwarka as part of Dwarka Packages.

Situated at the confluence of River Gomti and the Arabian Sea, the Samudra Narayan Temple is dedicated to Goddess Gomti. According to the legend, River Gomti has been brought from heaven by Rishi Vasishtha to sanctify Rama after his battle with Ravana. After purification of Rama, Goddess Gomti manifested here on the ghat and got submerged into the Arabian Sea. Along with Goddess Gomti, the temple enshrines beautiful idols of Lord Varuna, Samudra Deva, Mira Bai and Mother Asta Bhavani. There is a sacred kund or tank in the temple, where several ceremonial sacrifices performed.

This temple is surrounded by Panchanada Tirtha, which comprises 5 wells that have sweet water. A meditation cave known as Manoratha Dwar is situated near the temple. The most noteworthy feature of the temple is that the waves of the sea continuously hit on the temple walls. One can also visit Chakra Narayana Temple nearby, which features a stone marked with a sudarshan chakra that symbolizes Lord Vishnu.