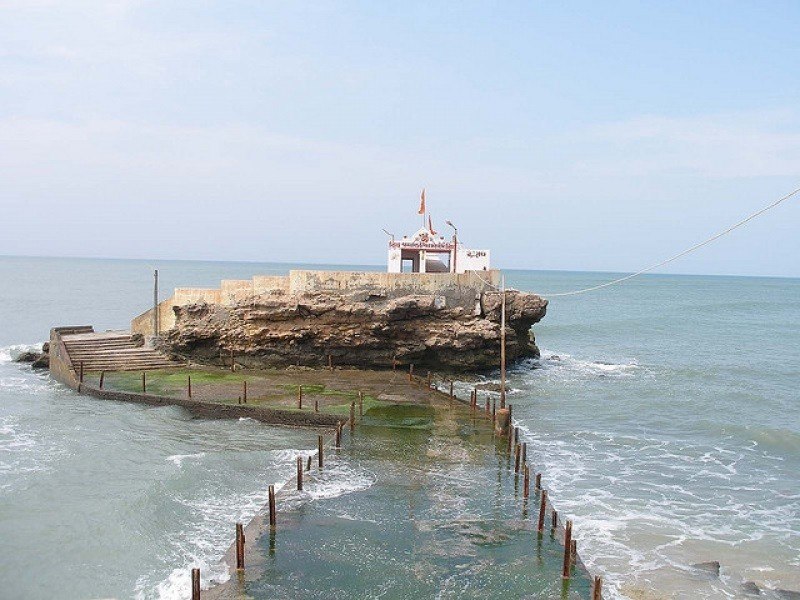 Built on a small hillock on the Arabian Sea, the Bhadkeshwar Temple is dedicated to Chandra-Mouliswar Shiva. This temple enshrines a Shivalinga in the sanctum which was found at the confluence of Gomati, Ganga and Arabian Sea by the Jagatguru Sankaracharya himself. This revered temple is situated near Geeta Mandir and Rukmini Temple. In addition, there are 1200 Salgramshilas, 1300 Shiva Lingas, metal forms of 75 Sankaracharyas in the temple premises.

There is a unique legend associated with the temple. It mentions the abhisheka of the Shivalinga done by the sea itself. Each year in June/July, there comes a day when the Arabian Sea slowly rises and enters the temple. For a shorter period of time, the whole temple submerges in the water till the abhisheka of the Shivalinga is done. After the prayers by the sea, it returns back to its normal stage.

There are steps to reach the temple but the temple gets surrounded by water during the high tide. The best time to visit Bhadkeshwar Mahadev Temple is around sunset and when the tide is low. Due to the location of Bhadkeshwar Temple, the spot offers a panoramic view of Dwarka's coastline. A fair takes palace here on the day of Maha Shivratri when thousands throng to pay respect to Lord Shiva. One can also visit Siddheshwar Mahadev Mandir nearby.