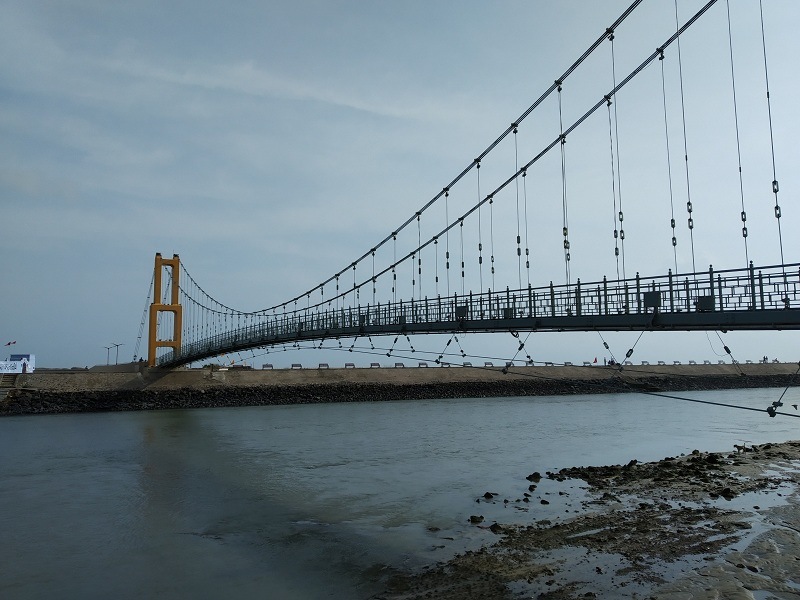 At a distance of 3 km from Dwarka Railway Station, Sudama Setu is a wonderful hanging bridge built on Gomati River near Dwarkadhish Temple in Dwarka, Gujarat. It is one of the popular places to visit in Dwarka as part of Gujarat Tour Packages.

Named after Sudama, the childhood friend of Lord Krishna, Sudama Setu connects Dwarkadhish Mandir of mainland Dwarka and Panchnad or Panchkui Tirth on the island in southeast of it. The bridge boasts of a great religious as well archaeological significance as the island has five sweet water wells called Panchkui associated with five Pandava brothers of Mahabharata.

Reliance Industries Limited, in collaboration with the Gujarat Tourism Department and Gujarat Pavitra Yatradham Vikas Board, built the bridge with a cost of INR 7.42 crore. The bridge is 166 meters long and 4.2 meters wide, having the capacity to carry 25,000 to 30,000 pedestrians an hour. The bridge is constructed with 40mm locked coil cable ropes provided by Usha Martin Limited.

The bridge provides wonderful views of Dwarkadish Temple, Gomti River and the Arabian Sea. Camel rides and ATV bike rides are available across the bridge in winter season which are exciting activities to do.