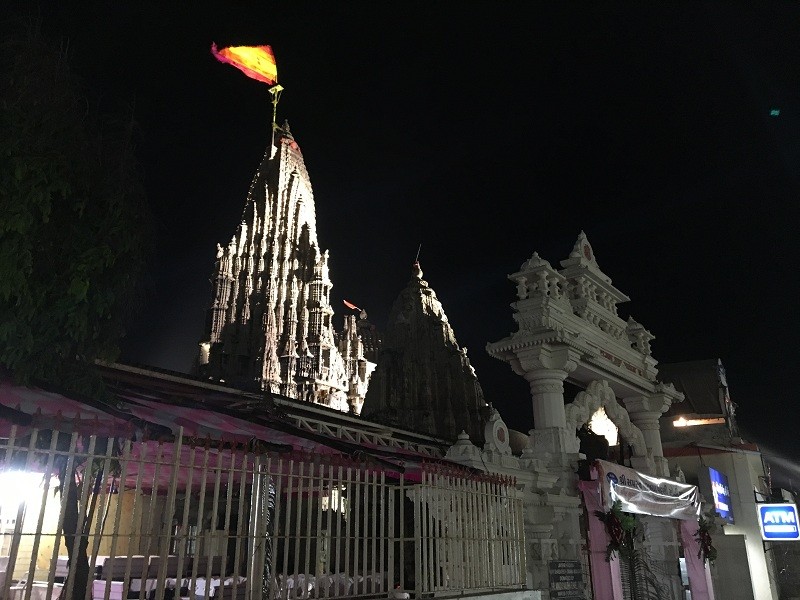 Place Location: On The Banks Of Gomti River

At a distance of 3 km from Dwarka Railway Station, Dwarkadhish Temple is an ancient Hindu temple situated in the holy town of Dwarka, Gujarat. Also known as Jagat Mandir or Trilok Sunder Temple, it is one of the revered temples in Gujarat, and among the must include places in Gujarat tour.

Situated on the banks of the Gomti River, Dwarkadhish Temple or Dwarkadheesh Temple is dedicated to Lord Krishna, who is worshiped here as Dwarkadhish or 'King of Dwarka'. According to legend, the temple was originally believed to be built by Vajranabh, the great-grandson of Lord Krishna, more than 2500 years ago on the palace where Lord Krishna lived. However, it was later enlarged in the 15th-19th century. It is also part of the famed Char Dham, the four sacred temples dedicated to Lord Vishnu while the other three are Rameswaram, Badrinath, and Puri. Since it is a Pushtimarg temple, it follows the guidelines and rituals created by Vallabhacharya and Vitheleshnath.

Built out of soft limestone, Dwarkadhish Temple reflects the Chalukyan style of architecture. The five-storied main shrine is supported by 72 pillars and is a sight to behold. The temple consists of a sanctum, vestibule, and a rectangular hall with porches on three sides. It has an exquisitely carved 42 m high shikhara with a huge flag made from 52 yards of cloth. There are two main entrances to the temple. The main entrance (north entrance) is called Moksha Dwar (Door to Salvation) and the south entrance is called Swarga Dwar (Gate to Heaven). Outside Swarga Dwar are 56 steps that lead to the Gomati River. The devotees are expected to take a dip in the Gomti River before proceeding into the temple through the Swarga Dwar.

The exterior is adorned with intricately carved sculptures and motifs from Hindu mythology that depicts the scenes of Krishna's life while the interior is quite simple and peaceful. The sanctum sanctorum of the temple houses the black magnificent idol of Lord Krishna as the resplendent king with four arms holding Sudarshana Chakra, Panchajanya or conch, lotus flower, and gada. This image of Lord Krishna is named Trivikrama and is the eighth avatar of Lord Vishnu. There are also other shrines within the temple that are devoted to Subhadra, Balarama and Revathi, Vasudeva, Rukmini, and many others. There is also a seat that belonged to Adi Shankaracharya here.

Among the top Dwarka places to visit, the temple of Dwarkadhish is famous for its flag worship. The flag or Dhwaja is considered to be of supreme importance in the temple and is changed four times a day. The flag, stitched out of 52 yards of cloth, is a spiritual icon and bears the images of the sun and the moon which is believed to indicate that Krishna would be there till the Sun and moon exist on earth.

Janmashtami is the most important festival celebrated at Dwarkadhish temple held in August / September every year during which thousands of devotees throng to this temple in order to witness the grand festivities. During this festival, the lord is decked up in his most royal avatar with abundant jewels such as gold, diamond, and topaz. Holi, Rukmini Vivah, Basant Panchami, Ram Navami, Akshay Tritiya, Deepawali, and Sharad Purnima are the other popular festivals celebrated in this temple.