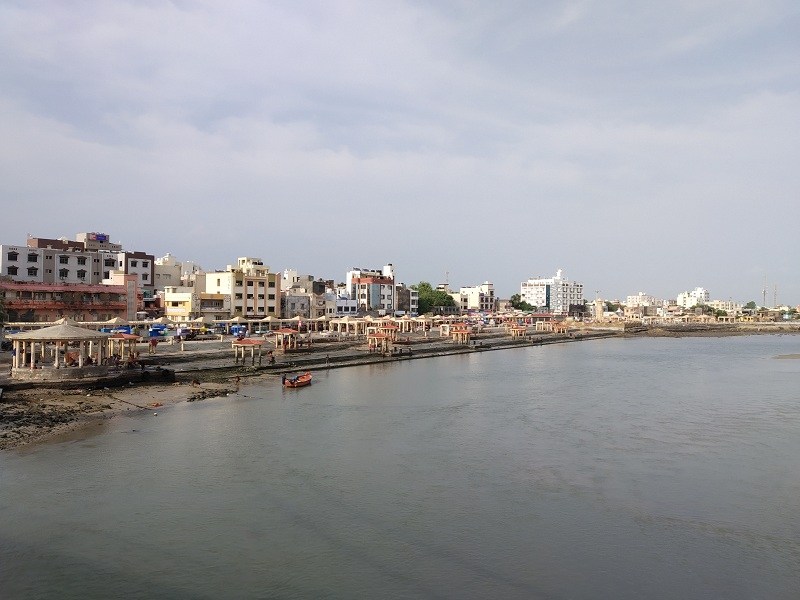 At a distance of 3 km from Dwarka Railway Station, Gomati Sangam Ghat is a sacred bathing ghat on the banks of River Gomti in Dwarka, Gujarat. Situated behind the Dwarkadhish Temple, it is one among the popular places to visit in Dwarka.

Gomti Ghat is situated at the mouth of Gomti River, a tributary of Holy Ganges, the most sacred river for all Hindus. The river originates in the Himalayan ranges of Nepal, flows down across many Indian states and finally empties into the Arabian Sea here. Gomti Ghat also has a great religious and mythological significance. According to myths River Gomati is the daughter of Sage Vashishta and her waters are powerful enough to purge one's mortal sins. Thus pilgrims make it a point to bathe in River Gomti and they usually take their holy dip into the Gomati Kund, the point of confluence of River Gomti and Arabian Sea.

There are over 12 ghats surrounding the Gomati River, which are venues of Samudra Narayana Temple, Gomatiji Temple, the Panchanada and Chakra Narayana. One has to go down a flight of 56 steps from Dwarkadhish temple's Swarga Dwar in order to reach the Gomati Ghat. Taking bath and performing sacred rites to forefathers at this Sangam Ghat is considered to be very holy and will liberate one from the sins committed in the previous births as it is said that Lord Sri Krishna known to have taken bath several times here.