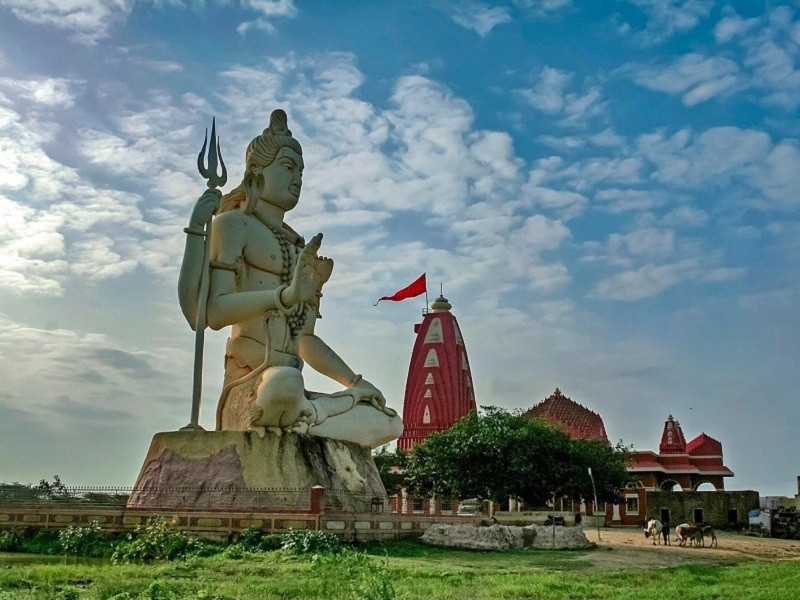 At a distance of 15 km from Dwarka, Nageshwar Temple is an ancient Hindu temple located at Nageshwar village in Gujarat. Also known as Nagnath Temple, it is one of the popular pilgrimage sites near Ahmedabad, and among the prominent places to visit as part of Dwarka sightseeing packages.

Dedicated to Lord Shiva, Nageshwar Temple is one of the 12 Jyotirlinga temples of Lord Shiva, and among the oldest temples mentioned in the Shiva Purana. The Jyotirlinga has a special significance in Nageshwar as this is believed to be the first of all 12 Jyotirlingas. The swayambhu lingam enshrined in the underground chamber at Nageshwar Temple is known as Nageshwar Mahadev and attracts thousands of pilgrims all-round the year. This powerful Jyotirlinga symbolizes protection from all poisons and is believed that one who prays here obtains freedom from all kinds of poison including snake poison.

Nageshwar is referred to as 'Daarukaavane Naagesham' in the ancient slokas of Rudra Samhita. According to the legend, there once lived a demon called Daruka, who was extremely cruel and tortured the people. One day he captured a Shiva devotee called Supriya along with many others. The prisoners were held in an underwater city that swarmed with sea snakes. Supriya advised all prisoners to recite the Shiva mantra 'Aum Namaha Shivayay' to protect them. When Daruka came to know about this he ran to kill Supriya. Instantly, Lord Shiva appeared in his full glory and killed the demon, and went on to reside in the powerful Jyotirlinga.

Considered as one of the most prominent places to visit in Dwarka, the temple is a simple structure with the typical Hindu architecture. The temple is more popular for its rich and evocative spiritual history rather than its architectural beauty. This temple is unique in the sense that the Shiva Lingam faces to the south and the Gomugam faces towards the east. The Shivalinga at Nageshwar is a Tri-Mukhi Rudraksha which is around 40 cm high and 30 cm in diameter. At Nageshwar one can also find goddess Parvati as Nageshwari along with the Shivalinga. There is also a 25 m giant statue of Lord Shiva in the temple complex that mesmerizes tourists and pilgrims alike with its aesthetic appeal.

Shivaratri is the major festival celebrated here with great enthusiasm at the temple. On the eve of Maha Shivaratri, a huge Mela is held on the grounds of the temple premises and thousands flock to the temple to witness the festivities.