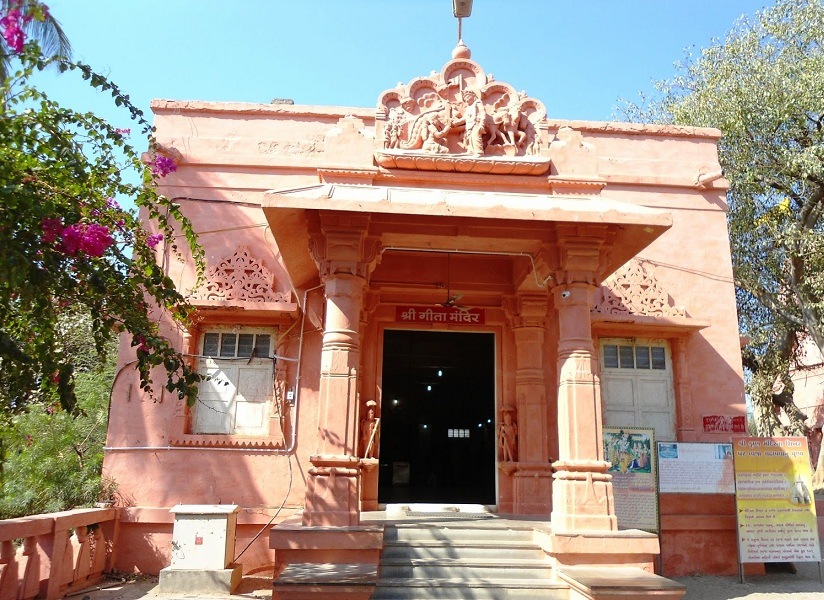 At a distance of 2 km from Somnath Temple and 2.5 km from Somnath Railway Station, Gita Mandir is a Hindu temple located on the banks of Triveni Sangam in the holy town of Somnath, Gujarat. Also known as Birla Mandir, it is one of the most popular pilgrimage spot in Somnath.

Dedicated to Lord Shri Krishna, the current structure of Gita Mandir was built in the year of 1970 by Birla Group. As per mythology, Gita Mandir is situated at the very exact spot where Lord Sri Krishna took rest after his walk from Bhalka Theerth to Triveni Theerth, before his journey to Neej Dham at Dehotsarg. This incident happened after he was hit by an arrow, towards the end of Dwapara Yuga and Lord Krishna proceeded to heaven from this place.

Known for its wonderful architecture carved out of white marbles, the Gita Mandir enshrines the idol of Lord Krishna in its sanctum. The presiding deity is flanked by two idols of Lord Laxminarayan and Lord Sita-Ram. The footprint of Lord Shri Krishna is carved here to mark the divine memory of Shri Krishna Neejdham Prasthan Leela. The Mandir is famous for its depiction of the Bhagwat Gita, which is carved out on 18 marble pillars. The interiors of the temple are decorated with several aesthetic paintings of Lord Krishna. The temple was constructed with marble in such a way that one can hear the echo of his voice inside the temple.