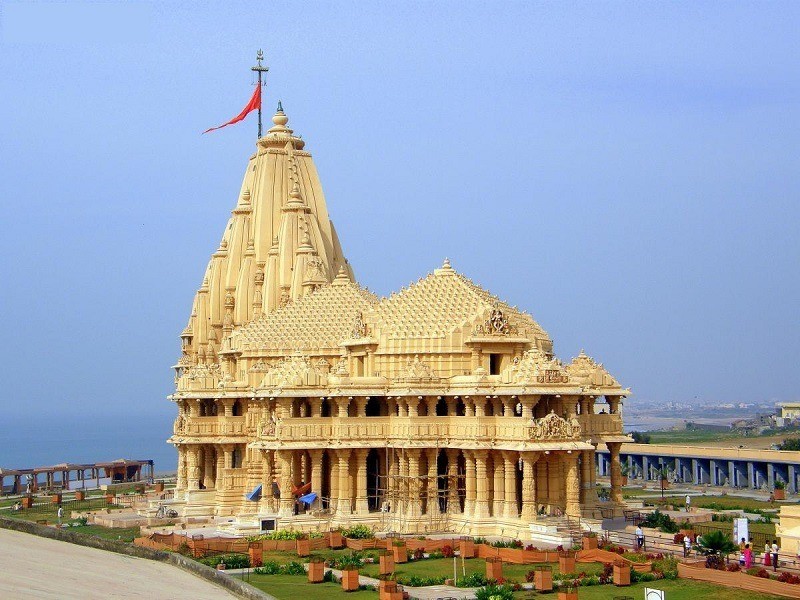 Travel Tips: People of any race and religion can enter the temple. But no one is permitted to enter the main Sanctum Sanctorum except the Priests.

At a distance of 2 km from Somnath Railway Station, Somnath Temple is a Hindu temple situated in Prabhas Patan on the coast of Arabian Sea in Gujarat. It is one of the most important temples in Gujarat for Hindus and among the must include places in Somnath tour.

Dedicated to Lord Shiva, Somnath Temple is believed to be the first among the twelve jyotirlinga shrines of Shiva. Somnath means 'Lord of the Soma', an epithet of Shiva. According to history scholars, the site of Somnath has been a pilgrimage site from ancient times as it was said to be the confluence point of three rivers, Kapila, Hiran, and the mythical Saraswati. The confluence was called Triveni Sangam and is believed to be the place where Soma, the Moon-god bathed and regained his luster.

According to Puranas, the original temple of Somnath was built in gold by the moon god Soma, in silver by the sun god Ravi, in wood by Krishna, and in stone by the Solanki Rajputs in the 11th century. According to history, The temple had been destroyed as many as seventeen times by Muslim rulers- Junamad in 722 CE, Mahmud of Ghazni in 1024 CE, Allaudin Khilji in 1299 CE, Mohammed Begeda in 1451, Portuguese in 1546, and finally by Aurangzeb in 1702, which was the worst of all attacks when a great wealth was stolen and a large number of people were killed. The temple was rebuilt every time with the reconstructive spirit of the people. The modern temple was reconstructed with the resolve of Sardar Patel who visited the ruins of Somnath Temple in 1947 and then President of India, Dr. Rajendra Prasad, installed the Jyotirlinga in the present temple in 1951.

Regarded as one of the best Somnath places to visit, the present temple of Somnath, Kailash Mahameru Prasad, was reconstructed in the Chalukya style of temple architecture. The sikhara or main spire of the temple is 15 m in height and it has an 8 m tall flag pole at the top. The temple architecture reflects the skills of the Sompura Salats, one of Gujarat's master masons. Commanding a breathtaking view from the tip of the Saurashtra peninsula, kissed by the waves of the Arabian coast, the temple's imposing architecture includes intricate carvings, silver doors, an impressive Nandi idol, and the central shiva linga. One can also see a Banastambha on the sea protection wall of the temple which mentions that the temple stands at a point that there is no land in a straight line between Somnath seashore until Antarctica. One can also visit Shri Kapardi Vinayak, Shri Hanuman Temple, and Vallabhghat.

The temple is illuminated every evening. The Sound & Light Show 'Jay Somnath' is also displayed every night, which allows the pilgrims an ethereal experience in the backdrop of the grand Somnath temple and the holy wave sounds of the Ocean.

Somnath Mahadev Fair is the major festival celebrated in this temple held on the Kartika Purnima of November/December. Besides, Shivratri, Golokdham Utsav, and Somnath Sthapana Divas are the other significant festivals celebrated in Somnath Temple.