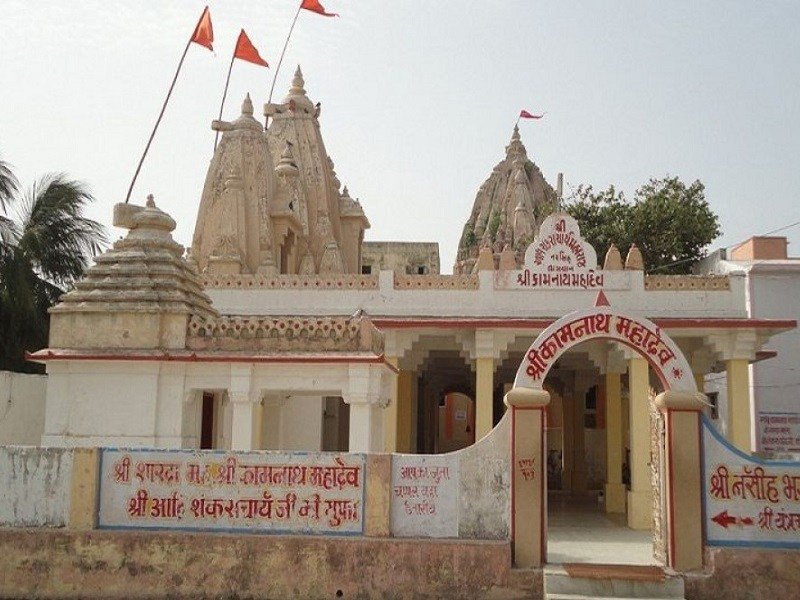 At a distance of 2 km from Somnath Railway Station, Kamnath Mahadev Temple is an ancient Hindu temple situated close to Triveni Sangam Ghat in Somnath town of Gujarat. Situated opposite to Panch Pandav Gufa, it is one of the significant temples in Somnath and among the must include places in Somnath Packages.

Kamnath Mahadev Temple is a massive temple complex constructed 200 years ago by King Mayurdhwaj. A huge temple of the main deity, Kamnath, occupies the center surrounded by many small structures. There are two huge water bodies inside the periphery, a holy pond known as Dudhiyu Talav and a bathing pool called as 'Mahadev no Kund'. It is widely believed that King Mayurdhwaj recovered from leprosy after bathing in Dudhiyu Talav and hence many devotees come to take a dip in this pond.

Dedicated to Lord Mahadev, this temple is also the seat of Shri Sharada Peetam of Sri Adi Shankara. Within the temple complex one can also see the temple of Maa Sharada and a long, narrow cave called Shankara Cave where Adi Shankaracharya meditated for years. A spectacular presentation of all the twelve jyotirlingas of Shiva is shown at the opening of this cave.

This is a very famous religious attraction in Gujarat. Devotees from every corner of India throng this place during the end of the month of Shravan when a grand fair is held to mark the culmination of this holy period.