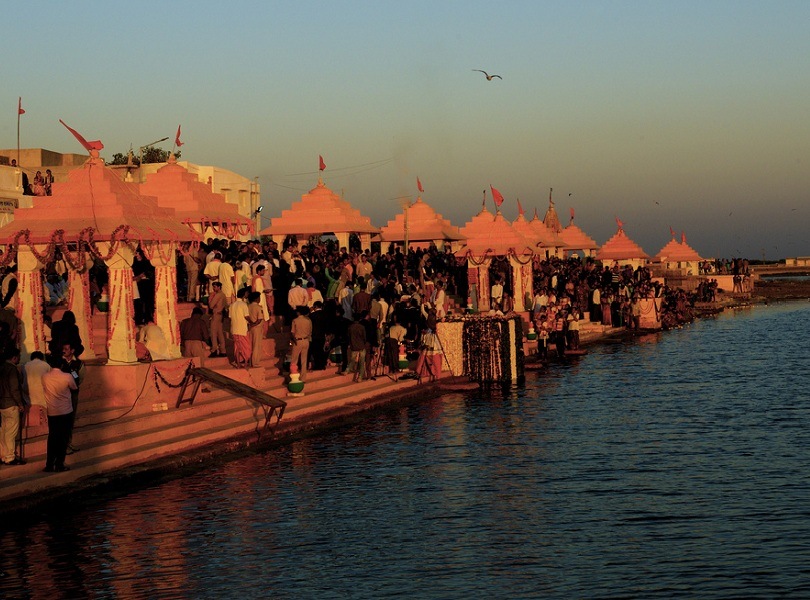 At a distance of 1 km from Somnath Temple and 2 km from Somnath Railway Station, Triveni Ghat is a holy place located in the pilgrimage town of Somnath. Situated near Somnath Beach, it is one of the most important holy places in Somnath.

Also known as Triveni Sangam, Triveni Ghat is the meeting place of three rivers Hiran, Kapila and Saraswati and then empties together into the Arabian Sea. These stages of rivers where they meet and then flow together to the sea symbolize human birth, life and death. Triveni Ghat holds a significant place in the Hindu Mythology and Puranas and also finds a mention in the Hindu epics Ramayana and Mahabharata. It is believed that a bath at Triveni Sangam can wash off all sins and also facilitate Moksha by merging with the God.

As per Hindu mythology, this is the place visited by Krishna after being hit by an arrow and is considered to be the cremation ground of Lord Krishna. A temple has been dedicated to him to mark the place. This is also the place where the chhatri of the Lord Krishna is constructed. One can also pay a visit to the popular temples of Gita Mandir and Lakshmi Narayan temple that are located on the banks of the ghat.

Several ghats and changing rooms have been made to provide assistance in bathing. People who have 'Pitrudosha' regularly come here to perform shraddha tarpan or ancestral worship. Due to the scarcity of water, a small dam has been built which makes this river bank perennial. Don't miss an opportunity to take a boat ride to the confluence point.