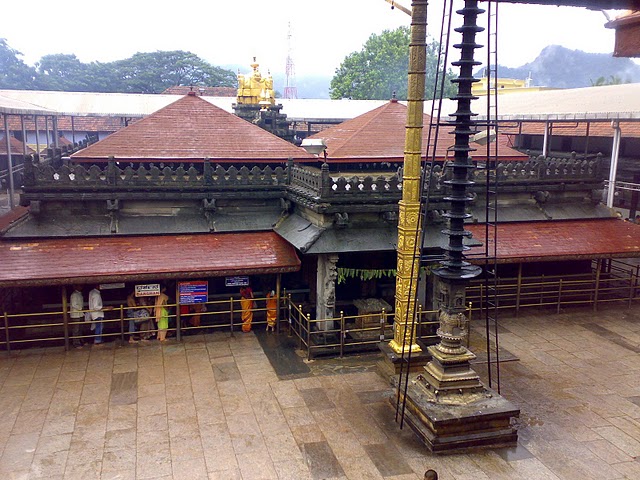 #4 of 20 Places to Visit in Murudeshwar

This temple is dedicated to Goddess Parvathi. According to Legend, Goddess Parvathi killed a demon called Kamsasuran who lived here and attempted to become powerful through his penance. Devi along with the help of Veerabadra, Ganesha and Shiva initially made him dumb and he came to be called Mookasuran (Mooka means dumb). Later the goddess killed him with her Chakra and called as Mookambika thereafter. The place where Devi killed Mookasura is known as Marana Katte.

The Panchaloha (five metals) image of the Goddess Mookambika is stated to have been consecrated by Adi Shankaracharya during his visit to this place. Devi Mookambika has three eyes and four arms, with chakra and conch in her hands sitting in the padmahasana posture. Mookambika is regarded as a manifestation of Shakti, Saraswathi and Mahalakshmi. Lord Shiva is also worshipped in this temple in the form of Lingam.

Built in Dravidian style, the temple is believed to be 1200 years old. The temple has received several enhancements during Keladi Nayakas period (15th / 16th century). The temple was also renovated in recent times. The quadrangular sanctum of the temple has a beautiful Vimana. The temple comprises of a large 135 feet long mandapa adorned with beautiful carvings of the deities. The beautiful sculptures of Ganesha, Subrahmanya, Naga, Mahishasura Mardini, Partheeshwara, Chandramouleeshwara, Pranalingeshwara, Nanjundeshwara, Anjaneya, Venkataramana, Thulasi Gopalakrishna are present in this temple. There is also an excellent sculpture of Panchamukha Ganesha. A huge deepasthambam (lamp pole) stands tall in the temple premises with 21 concentric circles.

Navaratri and Brahma Rathotsava (held in March) are the major festivals at this temple. Saraswathi Puja during the Navaratri Festival is the main event celebrated here and large numbers of pilgrims visit this temple on this occasion. Janmashtami is also a popular festival celebrated here.