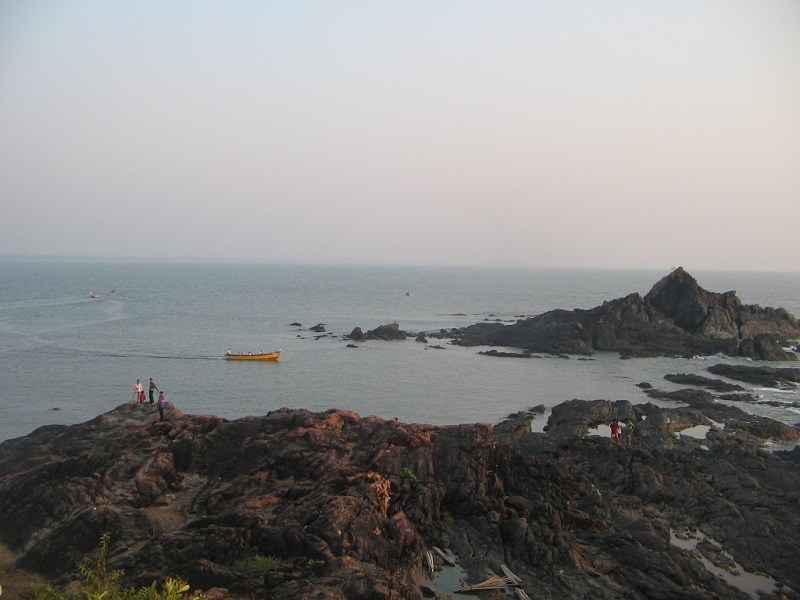 At a distance of 21 km from Ankola, 58 km from Karwar, 75 km from Murudeshwar, 163 km from Panjim, 165 km from Hubli, and 514 km from Bangalore, Gokarna is a small town in the Uttara Kannada district of Karnataka. It is one of the top places to visit in Karnataka, and among the must-visit places as part of Goa packages.

Gokarna is considered one of the famous places of pilgrimage in Karnataka, and among the well-known places to visit near Hubli. Sri Mahabaleshwar Temple which houses the Atmalinga is the must include place in Gokarna tour packages. The Atmalinga was given to Ravana by Lord Shiva himself. Ravana was stopped here for his evening prayers while going back to Lanka. He had been instructed by Lord Shiva not to keep the Atmalinga on the ground, since it would be fixed wherever it touched the ground. Atmalinga was a powerful weapon and devatas did not want Ravana to get such a powerful weapon, fearing destruction. Lord Ganesh took the avatar of a boy and offered Ravana to hold the Atmalinga during his prayer. Ganesha then kept the linga on the ground before Ravana comes back from prayer. Ravana, in extreme anger, tried to pull out the Atmalinga from the ground, breaking it in the process. These pieces then resulted in the establishment of various temples in Karnataka.

The name of the town Gokarna is derived from two words, Go and Karna, which means cow's ear. According to mythology, Lord Shiva appeared from a cow's ear, after he was sent to Patal Lok by Lord Brahma. Some believe that the town is located at the confluence of two rivers Aganashini and Gangavali, and the place where the rivers converge forms a shape that is similar to the ear of a cow, hence the name Gokarna. Gokarna was under the rule of the Kadambas, Vijayanagara kings, and was later conquered by the Portuguese.

Besides Mahabaleshwara temple, Maha Ganapathi Temple, Bhadrakali Temple, Varadaraja temple and Venkataramana temple are other Gokarna tourist places. Apart from being a religious town, Gokarna is also known for its beaches. The Om Beach, Kudle Beach, Gokarna Beach, Half Moon Beach, and Paradise Beach are the five main beaches here. Gokarna Beach is the town's main beach and pilgrims gather here when they visit the Mahabaleshwar Temple. Kudle Beach is the largest of the five beaches and it is crowded during the peak season from November to February. Om beach is one of the most renowned beaches in Karnataka, and is extremely popular among surfers. The beach gets its name due to the natural formation of the holy Om symbol.

About 149 km from Gokarna, Goa International Airport is the nearest airport that has direct flights from Bangalore, Hyderabad, Chennai, Pune, Delhi, Ahmedabad, and Mumbai. The nearest railway station to Gokarna is Gokarna road, which is about 10 km away. It has trains from Mumbai, Mangalore, Hubli, Bangalore, Ajmer, Karwar, and Pune. Another station, Ankola, railway station at a distance of 20 km from Gokarna, is considered as the nearest well-connected railway station to Gokarna. Gokarna is well-connected by road with the nearby cities including Goa, Bangalore, Mangalore, Hubli, Sirsi and Ankola. You can also hire a taxi from nearby cities for a more comfortable and convenient journey.

Gokarna is considered to be the Mukti Stala, where Hindus perform funeral rites. Devotees visit the Gokarna temple in large numbers during Mahashivratri and Kartika Purnima festivals. The entire town is decorated during the four days of the Mahashivratri festival and the temple deity is taken out in a procession.

How to Reach Gokarna - Full Details

Top 10 Places to Visit in Gokarna

#1 of 9 Places to Visit in Gokarna

At a distance of 500 m from Gokarna Bus Station, Sri Mahabaleshwar Temple is a sacred Hindu temple situated in Gokarna, Karnataka. It is one of the important places of pilgrimage in South India, and among the must include places in Gokarna Tour Packages.

The Mahabaleshwar Temple in Gokarna enshrines the Aatmalinga or Pranalinga of Lord Shiva. This is one of the best places to visit in Gokarna. This temple is regarded second only to the Kashi Vishwanatha Temple in Varanasi and is often called the Dakshina Kashi. The temple is said to be one of the seven sacred Muktikshetras and is visited by Hindus to perform the death rites for their ancestors.

According to the legend, Ravana performed a severe penance to Lord Shiva to possess his powerful Atmalinga. Pleased by his penance, Shiva gives him the Atmalinga. .....

#2 of 9 Places to Visit in Gokarna

At a distance of 6 km from Gokarna Bus Station, Om Beach is a pristine beach situated in Gokarna. Along the Arabian Sea coast, it is one of the most famous Karnataka beaches, and among the must visit Gokarna tourist places.

Om Beach is the most famous beach in Gokarna. It is shaped as two semi crescents joined together forming the shape of Om (Hindu religious symbol) hence the name Om Beach. Om Beach is further along the coast from Kudle Beach. The curve of the symbol forms a pool which can be a safe bathing area for even non-swimmers.

Blessed with tropical weather, the area has plenty of palm trees dotting its coastline. Its azure waters are ideal for an exciting dolphin spotting trip. Om Beach is the center for several water sport activities such as boating, surfing, water-skiing, parasailing, and banana boat rides, which will surely spike your adrenaline .....

#3 of 9 Places to Visit in Gokarna

It is one of the most popular sightseeing spots in Gokarna. This beach is mainly used by Indian pilgrims because it is located right behind the Mahabaleshwar Temple. As per the religious customs, pilgrims usually visit the temple after a dip in the waters of this beach (not mandatory though).

It is a long open beach and also known for surfing. Tourists can enjoy the view of the rocky mountains on one side and Arabian Sea on the other, while reaching Gokarna Beach. The Gangavalli river meets the sea near the beach. This part of the Arabian Sea is little aggressive and swimming here is not recommended.

The beach may not look very pretty due to a lot of litter, but this beach is famous for sunset. .....

#4 of 9 Places to Visit in Gokarna

#5 of 9 Places to Visit in Gokarna

Heggarne is the nearest village to Unchalli Falls, which is about 5 km away and the last 2 .....

#6 of 9 Places to Visit in Gokarna

#7 of 9 Places to Visit in Gokarna

Hubli or Hubballi is one of the fastest-growing cities in the state of Karnataka, and the second-largest city in the state after Bangalore. Lying on the 'Golden Quadrilateral' this multi-faceted city is also known as the cultural, educational, and music capital of the state. The city boasts numerous monuments and monasteries, that can be visited .....

#8 of 9 Places to Visit in Gokarna

The top of the island is a plateau covered with dry grass and trees. The island has .....

#9 of 9 Places to Visit in Gokarna